By combining imaging of deformed cells and artificial intelligence, researchers at the Max Planck Institute for the Science of Light and the Max-Planck-Zentrum für Physik und Medizin in Erlangen have succeeded in developing a high-speed method for identifying and sorting cells that does not require external cell labeling.

In medicine and biology, there is great interest in efficient and inexpensive methods for identifying and separating different cell types, for example for medical diagnostics or for regenerative therapies using stem cells. Up to this point, the method of choice has been the so-called flow cytometry, in which cells are labeled with fluorescent antibodies and then identified as they flow through a channel. However, this method has its weak points: Not only is it relatively expensive and time-consuming, but also the antibodies themselves can be problematic. As they are exogenous, they can change the properties of the cells they dock onto and can cause difficulties, for example, when they are injected into the body. Besides, the identification of cells is not always error-free in flow cytometry.

To help address these points, the physical properties of the cells can be used as an additional distinguishing feature: Due to the cytoskeleton, a fine network of filaments within the cell structure, each cell type has characteristic mechanical properties such as shape, size and, in particular, deformability. The team headed by Jochen Guck, Director at the Max Planck Institute for the Science of Light, had developed a new technique based on this a few years ago: Real-time deformability cytometry (RT-DC). In this technique, a cell suspension is pressed through a transparent channel thinner than hair in diameter. The cells are then stretched without damage and the degree of deformation allows an assignment to a specific cell type.

The cell types are assigned with the help of a high-speed camera that records the deformed cells in the channel at 2,000 to 4,000 images per second. This is comparable with videos in which you can watch a balloon pop in slow motion. The images are evaluated with special software that evaluates certain previously defined cell properties in real time. This real-time evaluation, in which every cell is identified immediately as it flows through the channel, is now the basis for the first innovation: it allows the cells to be deflected into a collection channel after identification. For the first time, cells can now be sorted based on their deformability.

Another novelty is to combine RT-DC with artificial intelligence: Hundreds of thousands of images of individual cells are an ideal basis for training a neural network to recognize different cell types. The AI-algorithm can then identify cells at previously unreached speed and also sort them in real time as wished.

Guck compares this approach to the strength of Google: "If cat owners post millions of cat photos on the Internet and write something like 'my cat', the search algorithm is trained on the image and the comment to recognize the characteristics that make a cat. If someone then googles for 'cat', the algorithm can train the neural network to identify the pictures with cat properties and filter them out of all other pet photos. "

With Guck's new method, the situation is similar: Since the fluorescent molecules are selected in such a way that they only dock onto certain cells, the lighting up of a fluorescent molecule corresponds to the comment "my cat". The photo of the cell with all its properties corresponds to the cat picture. In this way, the neural network learns that lighting up is connected to a specific cell type and can establish a connection to the associated photo of the cell. If the neural network has been trained sufficiently for a cell type by the fluorescence marker, the marker can finally be omitted entirely and the cell type is also recognized without fluorescence, just as the Google algorithm has learned to recognize cats without additional comments.

This new method has many advantages: After training the neural network, the time-consuming and cost-intensive fluorescence marking for identification is no longer necessary and the cells are no longer changed by foreign molecules. At this point, the images shot by the high-speed camera are sufficient to identify the cells. This procedure is very gentle on the cells, does not change the cell properties and can analyze up to 1,000 cells per second. The application of artificial intelligence to RT-DC also offers the advantage that the parameters, on the basis of which the cell recognition or a cell change through disease can be determined, do not have to be defined beforehand. You can let the AI decide which image information is best to differentiate cells.

Guck calls the newly developed method, which has now been published in the prestigious journal Nature Methods, an "ultimate cell sorter": it combines the accuracy of the established detection via fluorescence with the sensitivity of inherent mechanical cell properties and has the potential to become a future standard method to be used in all biological and biomedical laboratories. In the future, it will be possible, for example, to quickly recover blood-forming stem cells from a sample, which can then be injected into a chemotherapy patient to rebuild the immune system, or to sort out particularly suitable photoreceptor cells from human organoids in order to avert certain forms of blindness by transplantation.

MPI for the Science of Light 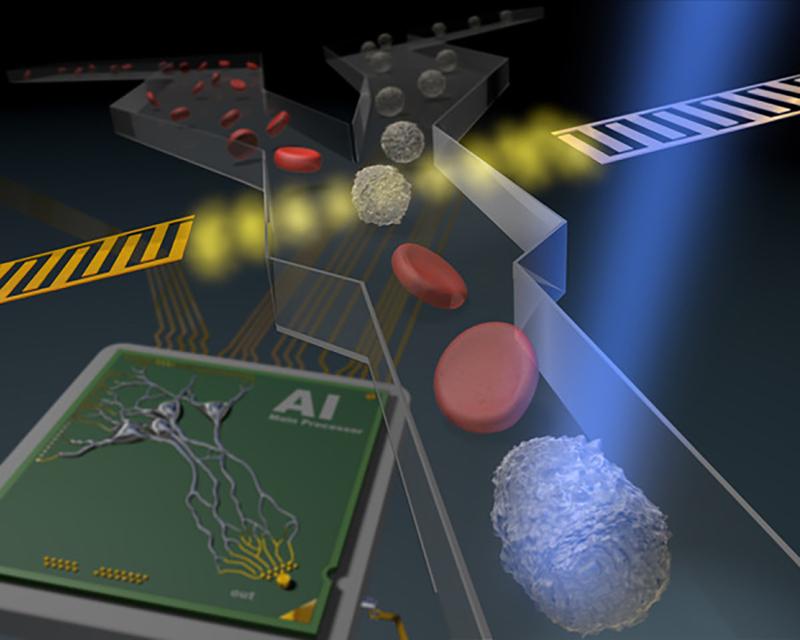