An international research team including astronomers from the Max Planck Institute for Radio Astronomy (MPIfR) in Bonn used a triple star system with the pulsar PSR J0337+1715 and two white dwarf stars to determine with extremely high precision that gravity causes neutron stars and white dwarf stars to fall with equal accelerations. Their findings provide the strongest test ever of one of the most fundamental predictions of general relativity: that gravity attracts all objects with the same acceleration, without regard for their composition, density or the strength of their own gravitational field.

A test of the universality of free fall

Pulsar PSR J0337+1715, located in the constellation Taurus, is a neutron star of 1.44 solar masses, showing regular radio pulses as it rotates 366 times per second around its own axis. It is a member of an unusual triple star system, in mutual interaction with two other stars, both of which are white dwarfs (see Fig. 1). A white dwarf is already quite exotic - a star typically the size of the Earth with a density of many hundred kilograms per cubic centimeter at its center. Compared to white dwarfs a neutron star is truly extreme, having more mass than the Sun squashed into a diameter of just over 20 kilometers and by this reaching densities of more than a billion tons within the volume of a sugar cube.

A research team, led by Guillaume Voisin (Jodrell Bank Centre for Astrophysics/UK and Ob-servatoire de Paris), including MPIfR astronomers Paulo Freire, Norbert Wex and Michael Kramer, and astronomers from several institutions in France, used the Nançay radio telescope (Fig. 2), located in the Sologne region of France, to precisely measure the arrival times of the radio pulses from PSR J0337+1715 over a time interval of eight years. They can show that neutron stars and white dwarf stars fall with the same acceleration within two parts per million.

This feature, known as the universality of free fall, lies at the foundation of Albert Einstein’s theory of general relativity. “Confirming it to this precision constitutes one of the most stringent tests of Einstein’s theory ever made - and the theory passes the test with flying colours”, says Dr. Guillaume Voisin. "Moreover, the results also provide very stringent constraints on alternative theories of gravity, which compete with Einstein's general relativity to explain gravity and, for example, dark energy.”

What is the universality of free fall?

The universality of free fall is a unique feature of gravity: Unlike all other interactions in nature, gravity attracts all material objects with the same acceleration. Galileo Galilei allegedly dropped several differently-sized weights from the leaning tower of Pisa to test this. Isaac Newton later considered this to be a fundamental principle of gravity, presenting it without a deeper explanation. The most precise test of the universality of free fall has, to date, been obtained by an especially designed satellite called MICROSCOPE (developed by the Centre Nationale d'Études Spatiales, in France). The small proof masses within the satellite show identical accelerations in the gravitational field of the Earth to better than 1 part in 10^14.

After the 1905 publication of the theory of special relativity, Einstein started thinking about how to combine his new theory with gravity, since Newton’s law of gravity is incompatible with his new principle of relativity. In the Fall of 1907, an idea came to his mind: that for someone in free fall it is as if gravity has been turned off, since due to the universality of free fall everything in his environment accelerates the same way. This simple but profound insight, led Einstein eventually to understand that gravity is a manifestation of curved space-time acting on all masses the same way, a concept which is at the heart of his general theory of relativity. He later described this sudden inspiration as “the most fortunate thought in my life”.

Because experiments like the MICROSCOPE satellite have confirmed the universality of free fall so precisely, most viable theories of gravity (general relativity included) incorporate Einstein’s insight as part of their foundation. It means that these theories likewise describe gravity as a geometric phenomenon, arising from the curvature of space-time. What differentiates them from general relativity is how space-time is curved by the masses of large bodies.

How to discriminate between general relativity and alternative theories of gravity
Although the aforementioned theories “predict” that small objects fall with the same acceleration in the same gravitational field, the picture is not so simple if instead of small objects we consider astronomical objects, which are held together by gravity itself. In this case, general relativity predicts the simplest possibility: that the universality of free fall also applies to such “self-gravitating” objects, while many of the alternative theories of gravity predict deviations from a universal acceleration. These deviations generally increase in magnitude with the amount of space-time curvature caused by the object. For objects like the Earth, the Sun and even white dwarf stars, the space-time curvature is very small. Compared to these, for neutron stars the curvature is a million to a trillion times larger. In theories of gravity that predict a violation of the universality of free fall related to self-gravity, that violation is generally stronger for neutron stars than for any other objects.

A pulsar in a triple star system

In 2014, radio astronomers found PSR J0337+1715 to be a member of a triple stellar system together with two white dwarfs. This system turned out to be an ideal testbed for testing the universality of free fall for a neutron star. Thanks to the precise radio tracking of the pulsar’s motion a test was carried out to show whether it falls at the same rate as the nearby white dwarf in the gravitational field of the outer white dwarf. This new test improves on an earlier study of the same system in two aspects. It provides a more stringent limit for any difference in the acceleration between the pulsar and its inner companion white dwarf, and it utilizes a better understanding of the properties of neutron-star matter, that came from the observation of a catastrophic collision of two neutron stars by the LIGO/Virgo gravitational wave observatories. “The latter was particularly important when constraining alternatives to general relativity”, explains Dr. Norbert Wex (MPIfR), a co-author of the study.

PSR J0337+1715 illustrates that Einstein’s ingenious insight also applies to such extreme cosmic objects as neutron stars which were discovered for the first time only 50 years after the publication of the theory of general relativity. “Perhaps more than any previous test, this result indicates that Einstein’s most fortunate thought really captures something fundamental about gravity and the inner workings of Nature”, concludes Dr. Paulo Freire, another co-author from MPIfR.

The test with the pulsar in the triple system is analogous to a classic test that has been ongoing for the last 50 years, the so-called Lunar Laser Ranging test (LLR).

As mentioned above, several alternative theories to general relativity predict that astronomical objects fall with different accelerations that depend on the amount of space-time curvature that they produce. Thus, under such theories, the Earth and the Moon should fall with a slight-ly different acceleration in the gravitational field of the Sun because the Earth produces a significantly larger space-time curvature than the Moon. For this reason, Kenneth Nordtvedt pro-posed in the 1960’s to use the retro-reflectors being deployed on the Lunar surface by American astronauts and Soviet rover missions to test whether the Earth and Moon fall with the same acceleration in the gravitational field of the Sun. By shooting laser beams at these reflec-tors, it became possible to measure the distance between the observatories and the reflectors on the Moon to a precision of a few centimeters. The results agree with the predictions of general relativity, with the Earth and Moon falling with the same acceleration in the field of the Sun to an accuracy of 1 part in 10^13.

Despite its great precision, this test has a drawback, which is the very small space-time curvatures caused by the Earth and Moon. Neutron stars are entirely different objects: within a di-ameter slightly larger than 20 km, they concentrate more mass than that of the Sun, which means several hundred thousand times the mass of the Earth. Their central densities of about one billion tons per cm^3 make them the densest form of matter in the present Universe. This has a consequence: they produce a space-time curvature that is 10^14 times larger than that caused by the Earth, making them truly strong-gravity objects. Compared to a neutron star, even a white dwarf has a weak gravitational field.

The experiment with the pulsar in the triple star system is in certain aspects analogous to the Lunar Laser Ranging experiment. The pulsar, in a 1.6 day orbit with the inner white dwarf (0.2 solar masses), is equivalent to the Earth in orbit with the Moon, and the outer white dwarf (0.4 solar masses), which is in a 327 day orbit with the inner binary, is the equivalent to the Sun, providing the gravitational field where the inner system falls. Instead of laser ranging, the precise tracking of the pulsar’s radio signals is used. These are not as precise as the laser ranging to the Moon: instead of a few cm, a ranging precision of a few hundred meters is achieved. This is one of the reasons that the pulsar measurement of the universality of free fall (2 parts in 10^6) is much less precise than the Lunar Laser ranging test (1 part in 10^13). However, as mentioned before, the space-time curvature caused by the pulsar is so large that many alternative theories of gravity that pass the highly precise lunar laser ranging test will fail the universality of free fall test for neutron stars.

PSR J0337+1715: triple millisecond pulsar with two white dwarf companions. The green mesh illustrates the curvature of space-time caused by the different masses. Size and distances are not to scale. 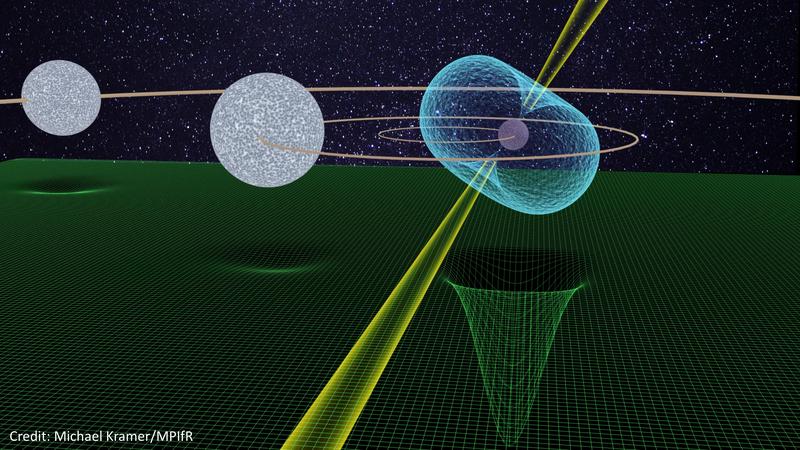 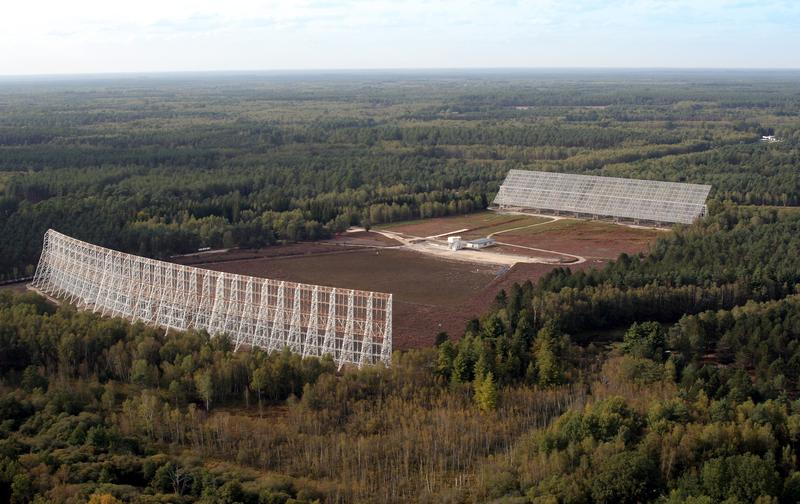