Twisted WSe₂ as a highly tunable platform for the study of exotic phenomena
Advanced Search ?

In recent years two-dimensional quantum materials have provided a platform for the realization of novel correlated and topological phases of matter. In a paper just published in Nature Materials, an international research team involving scientists from Germany, the United States, China and Japan reports that the twisted bilayer transition metal dichalcogenide WSe₂ enables the realization of exotic correlated phenomena, including high-Tc superconductivity and correlated insulators, in a controlled manner and without the geometrical restriction found in twisted bilayer graphene.

In their search for new materials which can conduct electricity without any resistance, the so-called superconductors, many scientists now investigate two-dimensional materials to advance their understanding of high-temperature superconductivity as well as other exotic materials phases. These ultra-thin substances, only one atom layer thick, can develop surprising new characteristics when they are laid on top of one another.

This means that scientists can engineer new properties in such materials by stacking thin layers in a particular, controllable fashion. One of the simplest and most interesting ways is to place two layers of the same material on top of each other with a slight twist. Depending on the angle of this twist, the layering causes significant changes in the material's electronic properties. Graphene, for example, can develop superconducting characteristics at a surprisingly high temperature when its 2D layers are twisted – a property it does not possess in its normal state.

Previous studies have shown that when two layers of graphene are stacked on top of each other with a slight twist (‘twisted bilayer graphene’), the low-energy electronic states are strongly localized and the kinetic energy scale of those states is significantly quenched. As a result, electron-electron correlations become important, so that with slight doping, the system is driven into Mott-like insulator and superconductor phases, with a phase diagram resembling those of high Tc superconductors. Therefore, twisted bilayer graphene is a novel platform for the study of exotic correlated phenomena, including high Tc superconductivity. Its simple structure and easy accessibility make it a promising material for research in this field.

However, twisted bilayer graphene also has its limitations. Due to its special electronic structure, the strong suppression of the kinetic energy scale only happens at specific twists – the so-called magic angles (starting at around 1.1°). Thus, the fascinating strongly correlated phenomena described above are only observed very close to the magic angle. This poses a challenge to the experimental realization in real laboratory conditions and also limits the tunability of the study.

Now, the international research team with scientists from the Max Planck Institute for the Structure and Dynamics of Matter (MPSD), RWTH Aachen University (both in Germany), Columbia University, the Center for Computational Quantum Physics at the Flatiron Institute (both in the USA), Nanjing University in China and the National Institute for Materials Science in Japan focused on shedding new light on the properties of those novel atomically thin materials. They report that similar phenomena can appear in the twisted bilayer transition metal dichalcogenide WSe₂, but – crucially – without the strict constraints imposed by any magic angles.

The team measured the transport properties of twisted bilayer WSe₂ at low temperatures with varying external magnetic fields and displacement fields. They found the signatures of the correlated insulator phases in samples with twist angles ranging from 4° to 5.1°. These correlated phases are highly tunable with twist angles and external displacement fields, which can be rationalized in terms of an effective Hubbard model on a two-dimensional triangular lattice.

In the sample with a twist angle of 5.1°, zero-resistance pockets are observed near the correlated insulator phase at a temperature below 3K, indicating a possible transition to a superconducting state. These new findings by Cory Dean’s and Abhay Pasupathy’s experimental groups at Columbia University were explained through extensive first principles and model calculations by Lede Xian and Ángel Rubio in the MPSD’s Theory Department, Martin Claassen at the Simons Foundation's Flatiron Institute and Dante Kennes at the RWTH Aachen University.

This study establishes that the twisted bilayer transition metal dichalcogenide WSe₂ is a highly tunable platform to engineer electronic band structures. It permits the detailed study of strongly correlated phenomena which would otherwise remain inaccessible, with great experimental and theoretical potential. In particular, the system provides a unique tunable solid-state realization of a single band Hubbard model on a triangular system where bandwidth and doping can be independently varied.

“Hence WSe₂ represents a promising alternative material for research into superconductivity and other exotic phenomena, such as exciton condensates, spin liquids, and magnetic ordering”, explains the director of the MPSD’s Theory Department, Ángel Rubio. “It opens up new opportunities for studying the interplay between strong interactions and frustration.”

Schematic of twisted bilayer WSe₂, where a correlated insulator phase and a possible superconducting transition emerge at a relatively wide range of small twist angles. 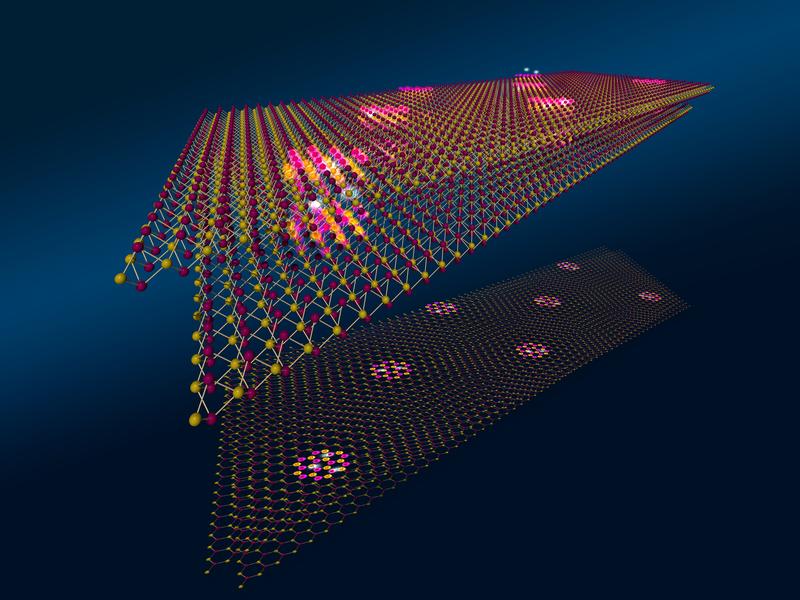