In the course of a comparative study on ichthyosaur fossils from England and Baden-Württemberg, palaeontologists from Stuttgart and Montreal discovered and scientifically described the new ichthyosaur species Hauffiopteryx altera. The fossil comes from the 182-million-year-old Posidonia Shale of southwestern Germany and is Early Jurassic in age.

The discovery of the new species is a piece of the puzzle contributing to our understanding of marine reptile evolution, as well as reconstruction of diversity and ecosystem of the ancient Jurassic sea. The research of the ichthyosaur experts Dr. Erin Maxwell from the Natural History Museum in Stuttgart and Dirley Cortés, working at the Redpath Museum at McGill University in Canada has now been published in the journal "Palaeontologia Electronica".

Ichthyosaurs or ‘fish lizards’ lived in large numbers in the Mesozoic seas. Like today's dolphins, these marine reptiles were extremely widespread and well-adapted to the aquatic environment. German scientists have known of these marine reptiles since the early 19th century, when the first spectacular and very well-preserved fossils were discovered in Baden-Württemberg. The Posidonia Shale of the Southwest German Basin is very rich in fossils and over the course of the last 200 years, thousands of beautifully preserved ichthyosaur skeletons have been recovered, ranging in size from two to more than ten meters in length. Many of these skeletons show fossilized soft tissues, stomach contents and embryos and are housed in museums around the world. The discovery of a new species of ichthyosaur after so many years of intensive research and collecting effort was considered unlikely by experts. However, the two-meter long ichthyosaur species Hauffiopteryx typicus, first discovered 90 years ago at the foot of the Swabian Jura, has also been found in rocks of the same age in England. Previous studies indicated that these populations, found 1000 km apart, may represent different species.

The ichthyosaur experts addressed this question through the comparative palaeontological study of fossils from England and southwestern Germany. The scientific investigation was complicated by differences in the way the fossils were preserved: the English fossils are preserved three-dimensionally, whereas the German skeletons are generally flattened due to pressure from the overlying rocks. To determine whether there were actually two geographically separate species of Hauffiopteryx, the researchers examined all known Hauffiopteryx fossils from Germany: seven complete skeletons and three skulls, one of which was three-dimensionally preserved.

The three-dimensional skull was examined first, because it was most similar in its type of preservation to the English Hauffiopteryx fossils. The palaeontologists quickly discovered that the arrangement of the bones in this skull was very different from the English Hauffiopteryx fossils, but also differed from the remaining nine German specimens. However, the latter showed no significant differences from the British material. The researchers' initial observations were supported by more detailed quantitative analyses: The differences in the three-dimensional skull of the ichthyosaur from southwestern Germany showed that it was a new species, distinct from all other specimens.

“The results are very interesting - it appears that there were no significant geographic differences between English and German ichthyosaur populations during the Early Jurassic. This indicates a homogeneous European marine reptile fauna during this period. However, at the same time, there were actually two species of the ichthyosaur Hauffiopteryx in southwestern Germany, proving that even well-studied fossil deposits such as Posidonia Shale can still hold surprises. We have found a new piece of the puzzle that provides us with a more detailed view of diversity during the Jurassic, and takes us one step further in researching ichthyosaurian biology,” enthuses Dr. Erin Maxwell.

Maxwell, Erin E. and Cortés, Dirley. 2020. A revision of the Early Jurassic ichthyosaur Hauffiopteryx (Reptilia: Ichthyosauria), and description of a new species from southwestern Germany. Palaeontologia Electronica, 23(2):a30.
DOI: https://doi.org/10.26879/937

<
Close-up of the skull of the new ichthyosaur Hauffiopteryx altera

<
Dr. Erin Maxwell with a specimen of the ichthyosaur Hauffiopteryx typicus

Close-up of the skull of the new ichthyosaur Hauffiopteryx altera

Dr. Erin Maxwell with a specimen of the ichthyosaur Hauffiopteryx typicus 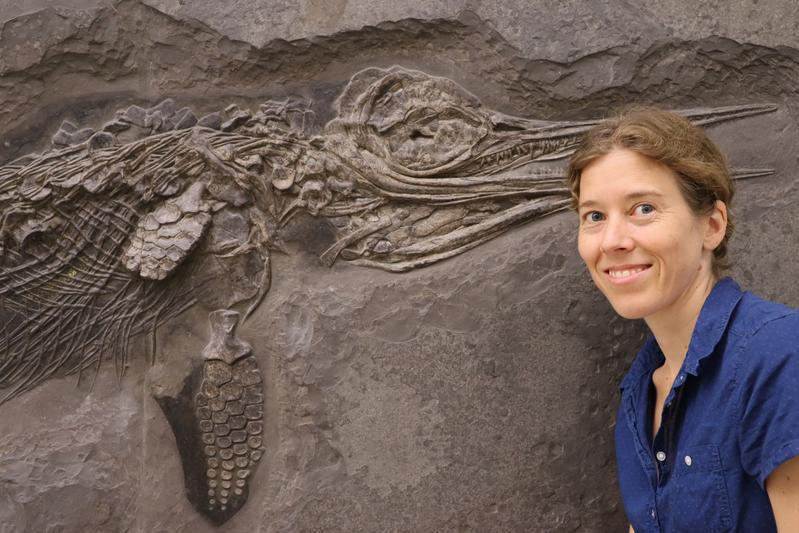