“Historically, conversions like Hagia Sophia are no isolated cases”

Research at the Cluster of Excellence on the conversion of religious buildings such as synagogues, churches and mosques from antiquity to the present day – researchers in Jewish Studies Kogman-Appel and Kleybolte in a dossier article on the destruction of synagogues in the Middle Ages – Byzantinist Grünbart on “national(istic) affectivity” concerning Hagia Sophia

From a historical perspective, the conversion of religiously and politically charged buildings such as Hagia Sophia in Istanbul is no new phenomenon, branching back to antiquity. “The background and context of such transformations always have to do with changes in the balance of power and the desire to make these clearly visible,” write Prof. Dr. Katrin Kogman-Appel and Franziska Kleybolte from the Cluster of Excellence “Religion and Politics” and the Institute for Jewish Studies of the University of Münster. A multitude of such cases can be found in all epochs, religions and regions. “The architecture and visual language of ritual spaces have a particularly great potential for expressing identity and, thus, for distinguishing one’s own group from other groups,” the researchers explain in a dossier article on the Cluster’s website, The conversion of Hagia Sophia into a mosque. An event with historical parallels, highlighting examples from antiquity, the Middle Ages and the present day. They investigate the phenomenon using the example of medieval buildings in present-day Spain, comparing religions and regions. “Appropriations on the Iberian Peninsula occurred as a result of conquests, forced baptisms on a massive scale and the expulsion of Jewish and Muslim minorities.”

According to Kogman-Appel and Kleybolte, these medieval conversions of synagogues into churches were “acts of seizure of power” which were intended to express “the triumph of the Church over Judaism”. The visual language of the buildings was religiously reinterpreted, new works of art with anti-Jewish content were installed, and building materials of the synagogues were reused. “To the conquered – if they continued to live in the area – this made their defeat all too obvious to them.” Economic motives also played a role, however, because in most cases the Jewish community lost all its public and private property together with the synagogue.

Little is known about the rituals of re-consecration, as the researchers explain, but the conversions were understood as “purifications”. Many churches were consecrated to Mary, the immaculate one. “In Rothenburg ob der Tauber in Germany, for instance, care was taken during the conversion in 1519 that there were no more mortal remains of a Jew in the place and that the whitewash was stripped off the walls and repainted so that everything ‘Jewish’ was expelled from the walls.” A similar move occurred in the conversion of Hagia Sophia into a mosque after the Ottoman conquest of Constantinople in 1453. “It too was ‘purified’: the Byzantine mosaics were whitewashed in order to do justice to the Qur’anic restraint towards images in religious contexts.”

With a view to the present, the researchers write: “Taking over, reusing and transforming religiously and politically charged space is by no means an isolated case – neither within Turkey nor in the longue durée: for example, a museum – formerly a mosque – in the Turkish town of Iznik was re-converted into a mosque in 2011; the same was considered for the Turkish town of Trabzon in 2013; and it has also been a phenomenon in history since antiquity, found again and again in all epochs, religions and regions.” The Jewish Studies project at the Cluster of Excellence is entitled Religious Buildings Change their Identity. Iberia 709–1611. This was preceded in the first funding phase by the project The Destruction of Sanctuaries in Late Antiquity of ancient historian Prof. Dr. Johannes Hahn.

“Hagia Sophia not a religious case, but national(istic) affectivity”

The article The conversion of Hagia Sophia into a mosque. An event with historical parallels has been published as part of a thematic dossier on the website of the Cluster of Excellence entitled Hagia Sophia – religious buildings and the history of their conversion. In a further dossier article, Byzantinist Prof. Dr. Michael Grünbart traces the eventful history of Hagia Sophia with its interior and exterior changes from the 6th to the 21st centuries. He stresses that the conversion of Hagia Sophia into a mosque was less a religious matter than a “national(istic) affectivity”. The building has not been a Christian church for more than 550 years. His article is entitled “Religion and politics at the Golden Horn? Turning over a new leaf on Hagia Sophia”. (vvm/sca) 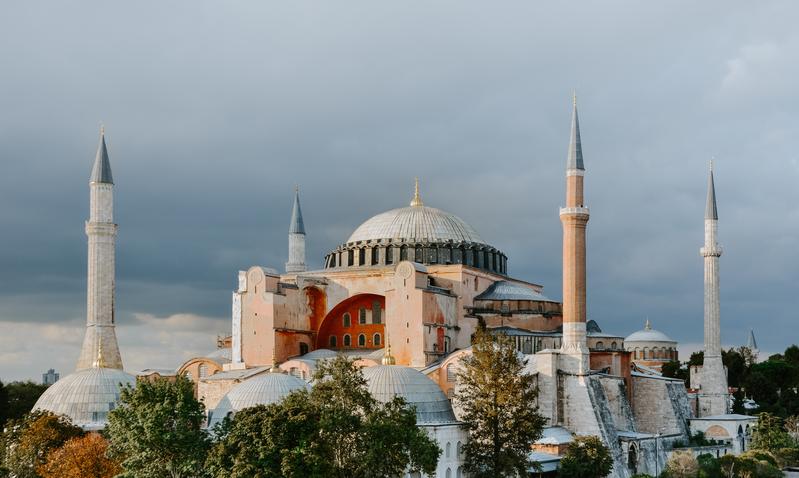