A research team at the Max Planck Institute for Molecular Genetics in Berlin has explored the role of factors in embryonic development that do not alter the sequence of DNA, but only epigenetically modify its “packaging”. In the scientific journal Nature, they describe how regulatory mechanisms contribute to the formation of different tissues and organs in early mouse embryos.

A fertilized egg cell develops into a complete organism with a multitude of different tissues and organs, although the genetic information is exactly the same in every cell. A complex clockwork of molecules regulates which cell in the body fulfills each task and determines the proper time and place to activate each gene.

Epigenetic regulator proteins are part of this molecular mechanism and act to modify the “packaging” of the DNA molecule without altering the underlying genetic information. Specifically, they act to bookmark the DNA and control what parts can be accessed in each cell.

Most of these regulators are essential, and embryos lacking them tend to die during the time of development when organs begin to emerge. However, these regulators may have specific functions that differ in every cell, making them difficult to study. This has also been a major hindrance for studying these proteins, which are not only relevant for the development of embryos, but also involved in the formation of cancer.

“The same regulator is present in all cells, but can have very different tasks, depending on cell type and time of development,” says Stefanie Grosswendt, one of the first authors of a new study in the scientific journal Nature.

Grosswendt and her colleagues Helene Kretzmer from Alexander Meissner's lab at the Max Planck Institute for Molecular Genetics (MPIMG) in Berlin together with Zachary Smith from Harvard University, MA, have now succeeded in elucidating the significance of epigenetic regulators for embryonic development with unprecedented precision.

The researchers analyzed ten of the most important epigenetic regulators. Using the CRISPR-Cas9 system, they first specifically removed the genes coding for the regulatory factors in fertilized oocytes and then observed the effects on embryo development days later.

After the embryos had developed for about six to nine days, the team examined the anatomical and molecular changes that resulted from the absence of the respective regulator. They found that the cellular composition of many of the embryos was substantially altered. Cells of certain types existed in excessive numbers, while others were not produced at all.

In order to make sense of these changes on a molecular level, researchers examined hundreds to thousands of individual cells from embryos, from which single epigenetic regulators had been systematically removed. They sequenced the RNA molecules of almost 280,000 individual cells to investigate the consequences of the loss of function. RNA relays information encoded on the DNA, allowing researchers to understand the identity and behavior of cells using sequencing technologies.

In their analysis, the scientists focused on a phase of development, in which epigenetic regulators are particularly important. When they compared the data of altered and unaltered embryos, they identified genes that were dysregulated, and cell types that are abnormally over- or underproduced. From this overall picture, they deduced previously unknown functions of many epigenetic regulators.

An eight-day-old mouse embryo looks a bit like a seahorse and does not have any organs yet. “From the outer appearance of an early embryo, one can often only guess which structures and organs will form and which will not,” say bioinformatician Helene Kretzmer and biologist Zachary Smith, who are also both first authors of the publication. “Our sequencing allows for a much more precise and high resolution view.”

The single-cell analysis gave them a highly detailed view over the first nine days of mouse development. Often, switching off a single regulator led to ripple effects throughout the network of interacting genes, with many differentially activated or inactivated genes over the course of development.

Removing the epigenetic regulator Polycomb (PRC2) had a particularly striking impact. “Without PRC2, the embryo looks egg-shaped and very small after eight and a half days, which is very unusual,” says Kretzmer. “We see vast changes to how DNA is packaged that happens much earlier, long before the embryo develops morphological abnormalities.”

The researchers found that PRC2 is responsible for limiting the amount of germline progenitor cells – the cells that later become sperm and eggs. Without PRC2, the embryo develops an excessive number of these cells, loses its shape, and dies after a short time.

“With the combination of new technologies we addressed issues that have been up in the air for 25 years,” says Alexander Meissner, who headed the study. “We now understand better how epigenetic regulators arrange for the many different types of cells in the body.”

The work is only the first step for even more detailed investigations, says Meissner. “Our method lets us investigate other factors such as transcription or growth factors or even a combination of these. We are now able to observe very early developmental stages in a level of detail that was previously unthinkable."

After 8 days, the developing mouse embryo resembles a seahorse. Without the epigenetic regulator PRC2, it is less complex and looks more like an egg. A closer look into the cells of the embryo reveals the tasks of regulatory factors during development. 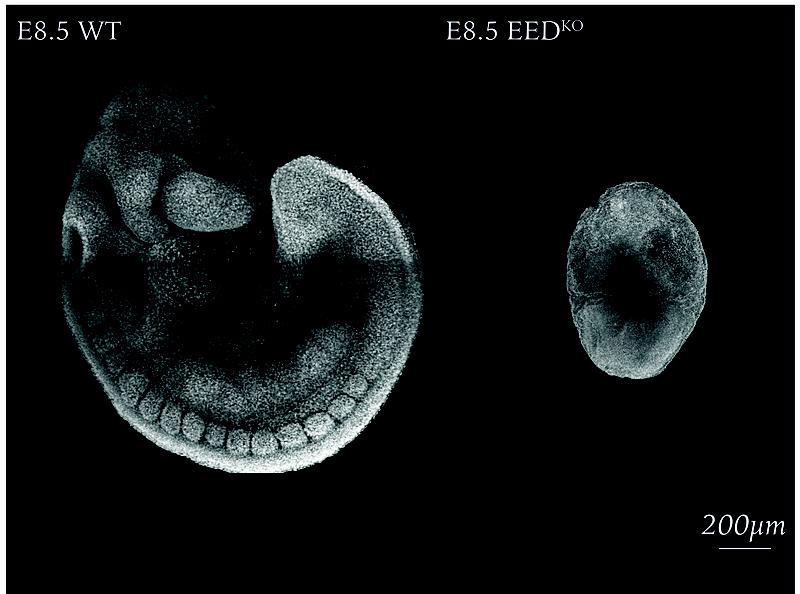