Scientists from Regensburg and Zurich have found a fascinating way to push an atom with controlled forces so quickly that they can choreograph the motion of a single molecule within less than a trillionth of a second. The extremely sharp needle of their unique ultrafast microscope serves as the technical basis: It carefully scans molecules, similar to a record player. Physicists at the University of Regensburg now showed that shining light pulses onto this needle can transform it into an ultrafast “atomic hand”. This allows molecules to be steered - and new technologies can be inspired.

Atoms and molecules are the constituents of virtually all matter that surrounds us. Interacting with each other according to the rules of quantum mechanics, they form complex systems with an infinite variety of functions. To examine chemical reactions, biological processes in a cell, or new ways of solar energy harvesting, scientists would love to not only observe individual molecules, but even control them.

Most intuitively, people learn by haptic exploration, such as pushing, pulling, or tapping. Naturally, we are used to macroscopic objects that we can directly touch, squeeze or nudge by exerting forces. Similarly, atoms and molecules interact via forces, but these forces are extreme in multiple respects. First, the forces acting between atoms and molecules occur at extremely small lengths. In fact, these objects are so small that a special length scale has been introduced to measure them: 1 Ångström (1Å = 0.000 000 000 1 m). Second, at the same time, atoms and molecules move and wiggle around extremely fast. In fact, their motion takes place faster than picoseconds (1 ps = 0.000 000 000 001 s). Hence, to directly steer a molecule during its motion, a tool is required to generate ultrafast forces at the atomic scale.

More than 30 years ago Eigler and Schweizer showed that with a scanning tunneling microscope it is possible to exert static forces to individual atoms. In such a microscope, an extremely sharp needle is used to sense atoms and molecules by scanning across them, similar to a record player. A team of scientists from Regensburg and Zurich has now tackled the challenge to make such forces fast enough to directly steer a molecule during its motion and thereby manipulate reactions and transitions. The Regensburg team around Rupert Huber and Jascha Repp built on a worldwide-unique ultrafast microscope that combines femtosecond laser pulses, giving access to ultrafast time scales, with scanning tunneling microscopy, which is capable of imaging individual molecules.

The team showed that, since light is an electromagnetic wave, its oscillating carrier wave could act as an ultrafast force, faster even than one oscillatory cycle of the light field. When they applied ultrafast lightwaves to the microscope’s atomic needle, they could indeed exert an ultrafast force locally, at individual regions of the molecule. “In this way, we can use the light-exposed needle as an ultrafast atom-scale ‘hand’ to push single atoms of the molecule”, explains Dominik Peller, the lead author of the new study.

Moreover, it turned out that only when the “atomic hand” applies ultrafast forces to very specific regions of the molecule, it induces the vibrational motion. As the team learned from a comparison with a quantum mechanical calculation performed by Nikolaj Moll in Zurich, this is because the molecule hooks into the surface via key atoms. Only when applying ultrafast forces to these particular atoms, the scientists could selectively steer the vibration of the molecule.

This development finally provides control over molecular reactions in the most direct way. Ultrafast atomic forces are expected to help understand and manipulate key processes in chemistry and biology to inspire future technologies based on single-molecule devices. In this way, the omnipresent ultrafast motion of the elementary constituent of matter cannot only be observed, but controlled and harnessed with unprecedented precision.

<
The tip of an ultrafast scanning tunnelling microscope hovers over a molecular switch. Ultrafast ato ...
© Brad Baxley (parttowhole.com)
Use only for reporting on this press release

The tip of an ultrafast scanning tunnelling microscope hovers over a molecular switch. Ultrafast atomic forces induce vigorous motion of a select atom of the molecule to control its reactivity on ultrafast time scales. 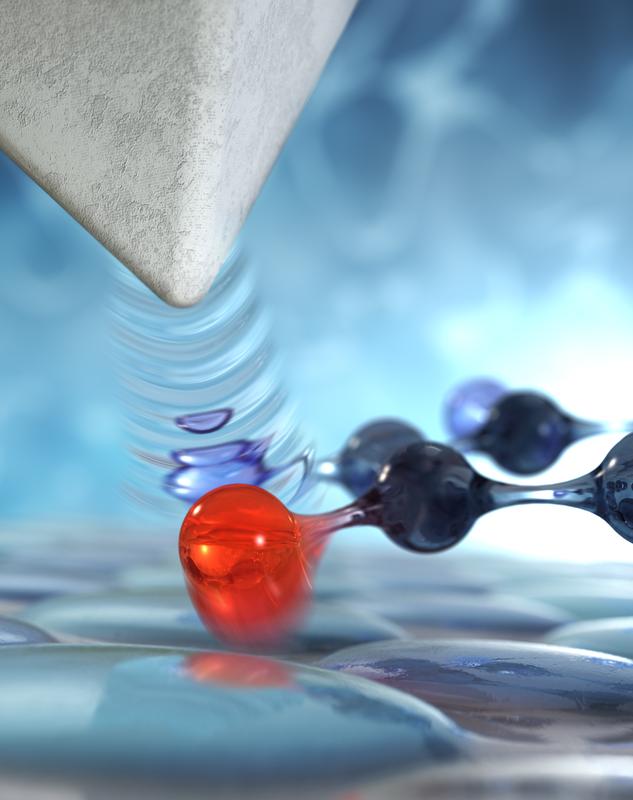