On Campus Inffeldgasse of Graz University of Technology, Bundesimmobiliengesellschaft is constructing two new buildings: the "Data House" and the "SAL building". The total project volume is about 55 million euros.

Addition to Campus Inffeldgasse: Today, 14th September 2020, the foundation stone for the new Data House and SAL building (Silicon Austria Labs building) was laid at Campus Inffeldgasse of Graz University of Technology (TU Graz) in the presence of TU Graz Rector Harald Kainz, Mayor Siegfried Nagl, SFG Managing Director Christoph Ludwig and Hans-Peter Weiss, CEO of the Federal Real Estate Company (BIG). The two buildings are being constructed on an 8,800 square metre site in Sandgasse. Together they offer around 20,000 square metres of net space. The investment volume is around 55 million euros. The completion of the buildings is scheduled for July 2022 (Data House) and January 2023 (SAL building).

"With the Data House and the SAL building, our Campus Inffeldgasse will be expanded by two important buildings. Big data, artificial intelligence as well as computer and electronics-based systems have long since ceased to be marginal topics, but have become forward-looking core areas that researchers at TU Graz have been dealing with intensively for a long time. With the addition of the new buildings, we can now also give these areas physical space at TU Graz. Sandgasse 34 and Sandgasse 36 are the new addresses for highly innovative research and development made in Styria," says Harald Kainz, Rector of Graz University of Technology.

Hans-Peter Weiss, CEO of Bundesimmobiliengesellschaft: "With the two new buildings, we are creating another innovative location in Graz where university, research and business come together. With the spatial concept, architecture and design of the open spaces, we are taking up the requirements of the different user groups and giving a conscious impulse for their interaction."

The mayor of Graz, Siegfried Nagl, is also delighted: "I think it's no exaggeration to say that the future is being built here. Once again, Graz University of Technology is demonstrating its strategic foresight in positioning the city as an important educational and business location in Europe. With the future topics of data science and microelectronics, the foundation will be laid for many future technologies, patents and ultimately high added value and many jobs."

SFG Managing Director Christoph Ludwig: "Without data and without their analysis, all our companies are and remain blind and deaf. For this reason, we decided in good time to join forces with Graz University of Technology on the Data House project, so that the near future will have a home in Styria. Because for a successful future development, the earliest time to start with data acquisition is always the best time.

For Barbara Eibinger-Miedl, state minister for economic affairs and research, who was not able to be present at the laying of the foundation stone: "The construction of the Data House and the SAL building are the next big step to further expand the field of strength of microelectronics in Styria. We are thus now combining existing strengths at one location and creating further fertile ground for top-level research in Styria. The created environment for start-ups is advancing new digital business models and allowing us to take advantage of the opportunities offered by digitisation."
Centre for data science – with financial support from the State of Styria and the EU

The Data House will be the new home for the Institute of Interactive Systems and Data Science at TU Graz and for the Graz Know-Center. The Know Center is one of the leading European research institutions for data-driven business and artificial intelligence and thus a training centre for the data scientists and software specialists of tomorrow. More than 500 people will dedicate themselves in the future to innovations in the field of digitisation in the Data House. The start-up incubator Science Park Graz is also located here with a large number of its start-ups. Both newly founded and established companies will in future cooperate with researchers on new methods of data science and artificial intelligence on the premises. The spatial arrangement promotes the continuity of university research to its implementation in the companies. Around 4,400 square metres of the building will be used by the University, and 3,900 square metres are reserved for use by companies. In addition to laboratory and office space, seminar rooms and common areas for students are also planned.
Stefanie Lindstaedt, CEO of Know Center GmbH and director of the Institute of Interactive Systems & Data Science (ISDS) is jubilant about the new location and about the fact "that after 20 years all employees of the ISDS Institute and the Know Center will finally be working together under the umbrella of the Data House. With more than 250 researchers, we provide combined know-how in big data, artificial intelligence and interactive systems. Together with Science Park Graz and other companies from different sectors, we will create a closely networked research infrastructure in the long term, which will produce innovations at the highest level." Graz und anderen Unternehmen aus unterschiedlichen Branchen werden wir langfristig eine eng vernetzte Forschungsinfrastruktur schaffen, die Innovationen auf höchstem Niveau hervorbringen wird.“

The Data House is a joint project of Graz University of Technology and the Styrian Business Promotion Agency (SFG). It is being set up by a joint company in which TU Graz has a two-thirds share and SFG a one-third share. The costs amount to around 26 million euros, with funding also coming from the European Regional Development Fund (ERDF).
New headquarters building for cutting-edge research in the field of electronics-based systems

Silicon Austria Labs GmbH (SAL), where focus is on research in the field of electronics-based systems (EBS), is now getting its own headquarters building on Campus Inffeldgasse in the form of the SAL building. The management of Silicon Austria Labs was previously temporarily located in the Electronics Based Systems building on the same campus. In addition to other locations in Villach and Linz, the Graz headquarters is increasingly working on power electronics, system integration and electromagnetic compatibility, as well as edge computing, machine learning and embedded artificial intelligence. In the future, more than 200 employees will be able to work in the new SAL building.

"The goal of SAL is to take its place in the champions league of research. With the new SAL building, we are coming a step closer to this goal, as we want to further expand our competencies at the Graz location in the coming years. In the new premises and laboratories, we can conduct even better research on innovative solutions together with our industrial and university partners and further expand our state-of-the-art research infrastructure,” says a persuasive Gerald Murauer, managing director of SAL. Besides cooperation projects with industrial partners, SAL also conducts research in joint research labs with TU Graz. Here, work is being done on the reliability of modern, computer-based systems and on the electromagnetic compatibility of electronics-based systems.
Campus character and sustainable building

With the two new buildings, a complete university campus is being created at the TU Graz Inffeldgasse location. The two structures – the SAL building and the Data House – are designed according to the same principle and each consists of five trapezoidal building elements. The SAL building opens with its forecourts and entrance areas towards the existing buildings on the site. The Data House is oriented towards Sandgasse and creates a connection to the surroundings. Squares, green spaces and avenues will be created, giving the area an additional campus character. The arrangement of the buildings is based on the idea and demand for a communicative spatial concept that can react flexibly to different user groups and user needs. For example, the size of the interior spaces can be flexibly designed, which makes the buildings economically and ecologically sustainable and extends the life cycle of the building.

The construction method and energy concept are also sustainable. The building envelope, for example, consists of passive house components, the solid concrete construction ensures a high storage mass and reduces the heating and cooling requirements; extensive greenery is planned for the flat roof.

The design was created by the Portuguese architectural office everySIZE arquitectura limitada and was the winner of an international architectural competition.

About Bundesimmobiliengesellschaft
The BIG group with its 2,012 properties is one of the biggest real estate owners in Austria. Its portfolio consists of around 7.3 million square metres of rentable space with a corporate value (fair value) of approx. EUR 12.8 billion. It is composed of the corporate divisions of schools, universities and specialist properties. Office and residential properties are combined in the subsidiary ARE Austrian Real Estate GmbH. The portfolio of ARE comprises 558 properties with approx. 1.7 million square metres of rentable space. Whereas BIG concentrates primarily on public institutions, ARE aims increasingly at non-public leaseholders. As a developer, the BIG group represents a significant economic factor in Austria. Economy and quality of architecture go hand in hand, something which is constantly demonstrated. Each project aims to fulfil the needs of future users in the sense of ecological, economic and socio-cultural sustainability. The BIG group has won several awards for its architectural commitment, including ten developer prizes up to now.
www.big.at

About TU Graz
Graz University of Technology is the oldest science and technology research and educational institute in Austria. It has played a key role in the international research and education network for more than 200 years. Graz University of Technology renders top performances in its five areas of excellence – the Fields of Expertise. It engages in intensive cooperation with other research and educational institutes as well as with business and industry worldwide. TU Graz has seven faculties with some 100 institutes and has a workforce of approximately 3,600. 13,500 students from 100 countries are studying at TU Graz. Building on bachelor’s programmes in science subjects, TU Graz concentrates on research-oriented master’s degree programmes, which are increasingly offered in English, and on PhD programmes. TU Graz’s five interdisciplinary Fields of Expertise – are: Advanced Material Science, Human & Biotechnology, Mobility & Production, Sustainable Systems as well as Information, Communication & Computing.

<
The design of the two buildings is based on the winning project of an international architectural co ...

The design of the two buildings is based on the winning project of an international architectural competition by the Portuguese architectural office everySIZE arquitectura limitada. 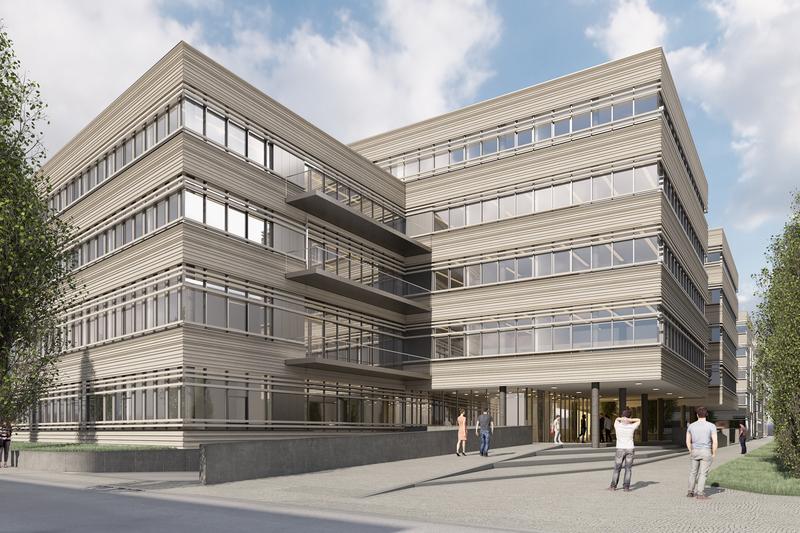 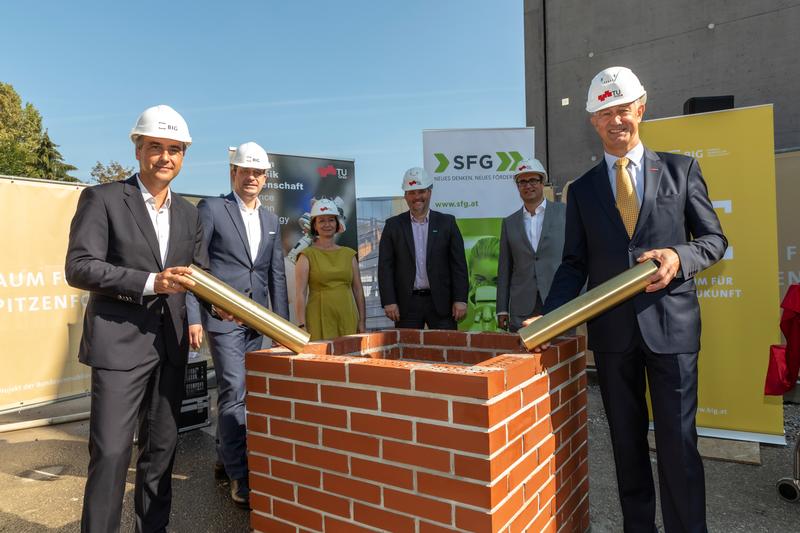