Topographically sketched catchment areas are a spatial unit based on the shapes of the earth's surface. They show how human activities and climate change influence the available quantities of water. Knowledge of these units is fundamental to sustainable water management. However, due to underground connections, some catchment areas accumulate water from areas beyond their topographic boundaries, while others are effectively much smaller than their surface topography would suggest. Currently, most hydrological modelling strategies do not take these groundwater connections into account, but assume that the catchments are independent of their surroundings. For this reason, Dr. Yan Liu and Assistant Professor Dr. Andreas Hartmann from the Chair of Hydrological Modeling and Water Resources at the University of Freiburg, together with a team of researchers from the University of Bristol in England and Princeton University in the US, have introduced the Effective Catchment Index (ECI). Using this new metric, they were able to determine how topographic and actual catchment areas differ when analyzing a global data set. The team recently published the results in the journal Environmental Research Letters.

Using the ECI, the team led by Liu and Hartmann was able to demonstrate that the assumption of a closed water balance, i.e. that the level of a river changes only through precipitation and evaporation from its topographic area, for example, does not apply to a considerable number of catchments around the world. Every third catchment studied has an effective catchment area that is even greater than twice or less than half its topographical area. The scientists recognized that these areas influence or are influenced outside their topographical boundaries by water management activities such as pumping groundwater and, for example, deforestation or reforestation.

With their analysis, the researchers show that the ECI they have redefined is suitable for investigating how drought can spread across topographical boundaries as a result of water exchange. It can also be used in the analysis of the effects of climate and land use changes on cross-boundary water exchange. "This is how we have seen where we need to further investigate underground networks across topographical boundaries in order to support sustainable water management," says Hartmann.

This research is funded by the Emmy-Noether-Program of the German Research Foundation (DFG) within Andreas Hartmann’s project “Global Assessment of Water Stress in Karst Regions in a Changing World.“ The Global Runoff Data Centre (GRDC) provided parts of the flow data for the global catchment area data set.

<
Blue circles indicate that the effective catchment area is larger than the topographic catchment are ...
Credit: Andreas Hartmann 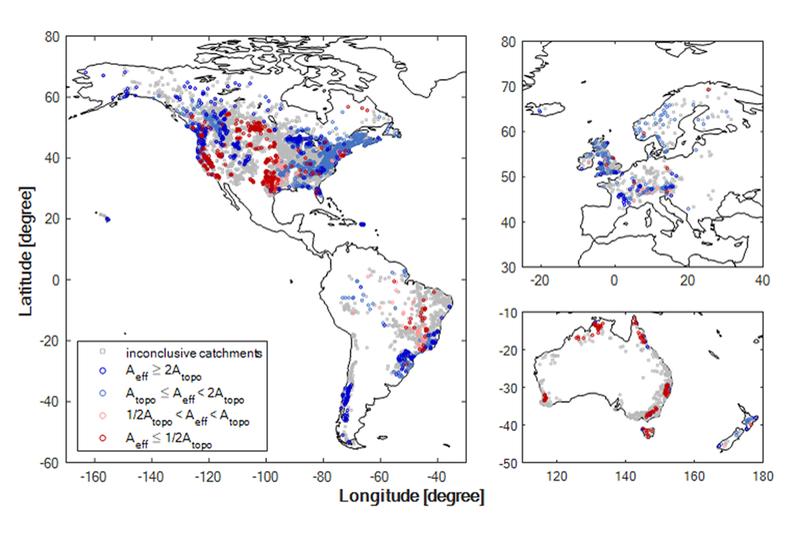