Happiness and the evolution of brain size
Advanced Search ?

Home > Press release: Happiness and the evolution of brain size

Happiness and the evolution of brain size

The happiness neurotransmitter serotonin can act as a growth factor for the stem cells in the fetal human brain that determine brain size.

During human evolution, the size of the brain increased, especially in a particular part called the neocortex. The neocortex enables us to speak, dream and think. In search of the causes underlying neocortex expansion, researchers at the Max Planck Institute of Molecular Cell Biology and Genetics (MPI-CBG) in Dresden, together with colleagues at the University Hospital Carl Gustav Carus Dresden, previously identified a number of molecular players. These players typically act cell-intrinsically in the so-called basal progenitors, the stem cells in the developing neocortex with a pivotal role in its expansion. The researchers now report an additional, novel role of the happiness neurotransmitter serotonin which is known to function in the brain to mediate satisfaction, self-confidence and optimism – to act cell-extrinsically as a growth factor for basal progenitors in the developing human, but not mouse, neocortex. Due to this new function, placenta-derived serotonin likely contributed to the evolutionary expansion of the human neocortex.

The research team of Wieland Huttner at the MPI-CBG, who is one of the institute’s founding directors, has investigated the cause of the evolutionary expansion of the human neocortex in many studies. A new study from his lab focuses on the role of the neurotransmitter serotonin in this process. Serotonin is often called the happiness neurotransmitter because it transmits messages between nerve cells that contribute to well-being and happiness. However, a potential role of such neurotransmitters during brain development has not yet been explored in detail. In the developing embryo, the placenta produces serotonin, which then reaches the brain via the blood circulation. This is true for humans as well as mice. Yet, the function of this placenta-derived serotonin in the developing brain has been unknown.

The postdoctoral researcher Lei Xing in the Huttner group had studied neurotransmitters during his doctoral work in Canada. When he started his research project in Dresden after that, he was curious to investigate their role in the developing brain. Lei Xing says: “I exploited datasets generated by the group in the past and found that the serotonin receptor HTR2A was expressed in fetal human, but not embryonic mouse, neocortex. Serotonin needs to bind to this receptor in order to activate downstream signaling. I asked myself if this receptor could be one of the keys to the question of why humans have a bigger brain.” To explore this, the researchers induced the production of the HTR2A receptor in embryonic mouse neocortex. “Indeed, we found that serotonin, by activating this receptor, caused a chain of reactions that resulted in the production of more basal progenitors in the developing brain. More basal progenitors can then increase the production of cortical neurons, which paves the way to a bigger brain”, continues Lei Xing.

Significance for brain development and evolution

“In conclusion, our study uncovers a novel role of serotonin as a growth factor for basal progenitors in highly developed brains, notably human. Our data implicate serotonin in the expansion of the neocortex during development and human evolution”, summarizes Wieland Huttner, who supervised the study. He continues: “Abnormal signaling of serotonin and a disturbed expression or mutation of its receptor HTR2A have been observed in various neurodevelopmental and psychiatric disorders, such as Down syndrome, attention deficit hyperactivity disorder (ADHD) and autism. Our findings, published in the journal Neuron, may help explain how malfunctions of serotonin and its receptor during fetal brain development can lead to congenital disorders and may suggest novel approaches for therapeutic avenues.”

<
The image shows the placenta in the soil, which supplies the tree of brain with serotonin, helping t ...

The image shows the placenta in the soil, which supplies the tree of brain with serotonin, helping the brain to grow. 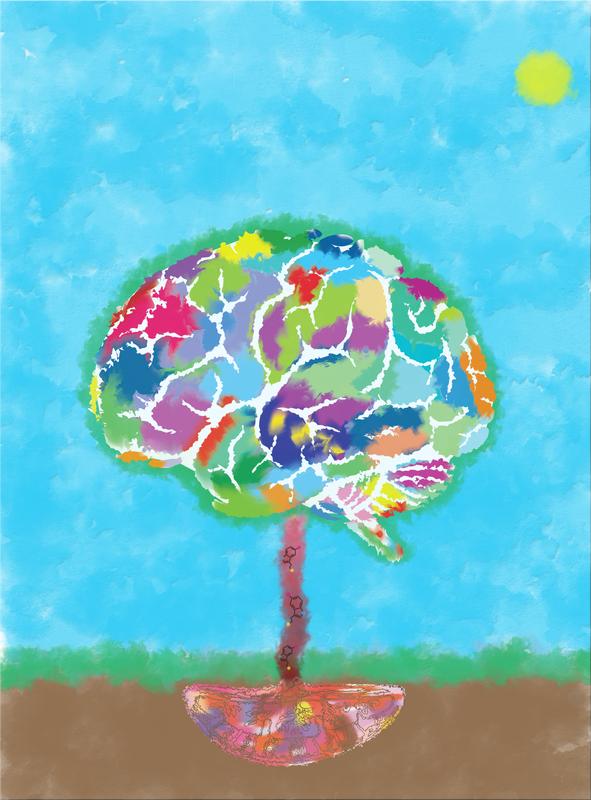