Humboldt Rankings 2020 confirm: Jacobs University is one of the most popular universities among researchers from abroad

Thinking beyond national borders is important – especially in science. Every year, renowned scientists from abroad decide to spend a research stay at Jacobs University. According to the recently published Humboldt Rankings, the international university in Bremen is one of the most popular universities among researchers from abroad. The English-speaking Jacobs University ranked an outstanding seventh place in the Germany-wide comparison.

"We are proud that Jacobs University makes an essential contribution to getting top international researchers and young scientists enthusiastic about Bremen as a science location. With the excellent ranking of our university, Bremen is in the same league as the metropolises of Berlin and Munich as well as the traditional university cities of Göttingen and Bonn", says Professor Thomas Auf der Heyde, Provost of the international university; "The Humboldt Rankings impressively confirm our concept of an English-speaking campus university in Bremen".

A vanguard position in the Humboldt Rankings is a clear indication of the global reputation of research institutions in Germany. The rankings are based on the number of guest stays by top international researchers and young scientists who have conducted research in Germany as Alexander von Humboldt Foundation fellows or award winners over the past five years. In order to avoid statistical bias due to the varying sizes of the host institutions, the Humboldt Rankings are based on weighted counting of the number of visiting researchers per university. The Freie Universität and the Humboldt-Universität zu Berlin, followed by the Ludwig-Maximilians-Universität Munich, hold the first places in the Humboldt Rankings 2020. Jacobs University Bremen ranked an outstanding seventh place among the more than 80 evaluated universities in the Germany-wide comparison.

"The Humboldt Rankings show how very attractive Germany is as a location for conducting research and reflect German science’s many good international connections. The rankings also indicate which universities and research institutions are particularly popular among the Humboldt Foundation’s international guest researchers. In addition to large universities in major cities, Germany also has a wealth of attractive, smaller institutions with an international profile," says Hans-Christian Pape, President of the Alexander von Humboldt Foundation.

This year, Jacobs University has already achieved top positions in various university comparisons: in the Times Higher Education (THE) World University Ranking, in the EU-oriented U-Multirank, and in the CHE Ranking, the most detailed university ranking in the German-speaking world.

About Jacobs University Bremen:
Studying in an international community. Obtaining a qualification to work on responsible tasks in a digitized and globalized society. Learning, researching and teaching across academic disciplines and countries. Strengthening people and markets with innovative solutions and advanced training programs. This is what Jacobs University Bremen stands for. Established as a private, English-medium campus university in Germany in 2001, it is continuously achieving top results in national and international university rankings. Its more than 1,500 students come from more than 120 countries with around 80% having relocated to Germany for their studies. Jacobs University’s research projects are funded by the German Research Foundation or the EU Research and Innovation program as well as by globally leading companies.
For more information: www.jacobs-university.de
Facebook | Youtube | Twitter | Instagram | Weibo

<
Humboldt-Fellow Dr. Kalyanashis Jana (on the left) came for a two-year research stay to Bremen. He i ...

Humboldt-Fellow Dr. Kalyanashis Jana (on the left) came for a two-year research stay to Bremen. He is currently doing research in the group of Dr. Ulrich Kleinekathöfer, Professor of Theoretical Physics at Jacobs University. 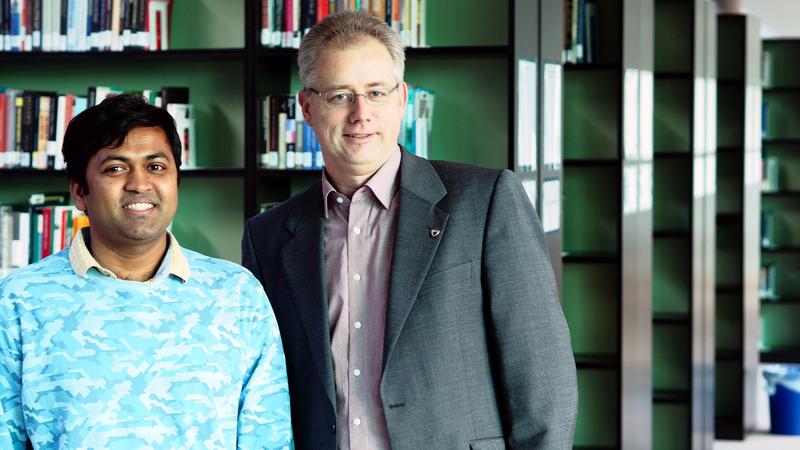