The Helmholtz Centre for Infection Research (HZI) in Braunschweig is establishing a new Helmholtz Institute in Greifswald, which shall bring together the individual competencies in the field of molecular infection research of the University of Greifswald, University Medicine Greifswald and the Friedrich-Loeffler-Institut in one joint institute of the HZI. The financial means for setting up the Institute - 23 million euros for the new building and more than 35 million euros for the initialisation phase - have now been allocated by the Federal Government and the State of Mecklenburg-Vorpommern. In Greifswald, Prof Katharina Riedel is coordinating this initiation phase as provisional founding director.

The establishment of the institute goes back to a decision made by the Budget Committee of the German Bundestag. The plans for Greifswald’s new institute include three research departments, each with its own W3 professorship and three junior research groups. A new building is also planned. The costs of construction for the new building, amounting to 23 million euros, are being covered by the Federal Government and the State of Mecklenburg-Vorpommern (at a ratio of 50/50), the operation of the Helmholtz Institute during the initial phase up until 2024 will also be financed and cost around 35.9 million euros (at a ratio of 90/10).

Head of Department at BMBF, Prof Veronika von Messling, who is also Chairperson of HZI’s Supervisory Board, sees the institute as an opportunity to improve our understanding of the importance of interactions between humans, animals and the environment for the occurrence and spread of new infectious diseases.

The mobility of humans resulting from globalisation, climate change, and the intensive keeping of animals favour the outbreak and the fast spread of infections. The current coronavirus SARS-CoV-2 pandemic is an evident example of how fast pathogens are able to cross species barriers and political borders, in turn becoming a global threat. This outbreak clearly demonstrates that human health is closely related to the health of animals and an intact environment. It is exactly at this interface, which is addressed by the so-called “one health concept” that Greifswald’s Helmholtz Institute shall come into play.
“We are particularly interested in zoonoses, i.e. infections in which the pathogens have been passed from an animal to humans and which represent a huge challenge to society and medicine,” says Prof Dirk Heinz, Scientific Director of the HZI. Special attention will be given to infection epidemiology, the molecular mechanisms of infections and the interaction between the pathogen, its host and the environment. The scientific concept has been developed in close collaboration with Prof Katharina Riedel, who is head of the University of Greifswald’s Institute of Microbiology. The concept for the new Helmholtz Institute will be presented to the Senate of the Helmholtz Association at the end of the month. Calls for proposals for the first collaboration projects with an annual funding volume of around one million euros were published on 6 October 2020.

The University of Greifswald
The University of Greifswald is one of the oldest universities in Germany and the Baltic Sea Region. It maintains exchange relationships to more than 200 universities across the globe. International students and scholars come from more than 90 different countries. The University of Greifswald offers excellent study conditions in modern buildings with an excellent infrastructure for research-led teaching. The University’s academics have access to an excellent research infrastructure, which includes two interfaculty research buildings of national importance, as well as a state-of-the-art (meta)proteomics platform. Infection research at the University is based around interdisciplinary and interfaculty research networks, which address important bacterial pathogens, the diagnosis and therapy of infectious diseases, viral-bacterial coinfections, the spread of antimicrobial resistances, microbes found in humans and certain environments, and bats as potential pathogen reservoirs. http://www.uni-greifswald.de/en

Aerial photo of the Beitzplatz Campus 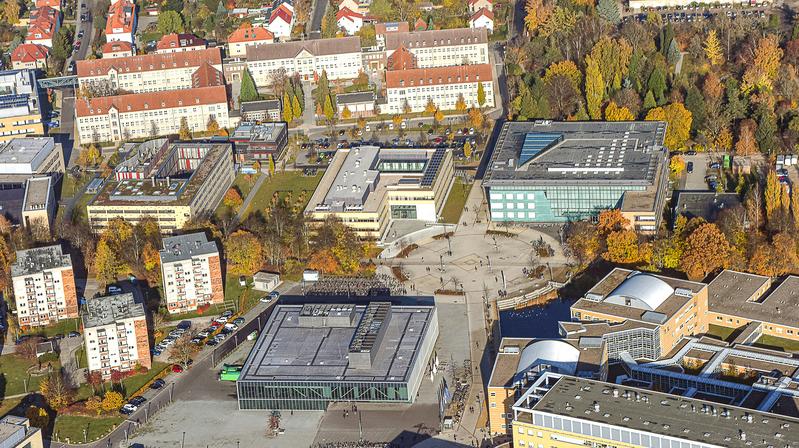