The restoration of the first German tide calculator is completed. Thanks to the most modern methods, the 105-year-old masterpiece of mechanics from the imperial era is functioning again and is to be put into public operation regularly.

It is a superlative exhibit - the tide calculator: it is the oldest of its kind in Germany and can also be described as one of the first analogue computers. Only three stationary tide calculators were ever manufactured in Germany. In total, less than thirty have ever been built worldwide over a period of almost 100 years. Of those that have been preserved, only a few are publicly accessible. The German Maritime Museum (DSM) / Leibniz Institute for Maritime History is therefore all the more pleased that two of these treasures belong to the collection - the model from 1915 and another from the GDR.

With its many cogwheels and circular tidal gears, the tide calculator asserts itself as an imposing appearance among the other objects in the SEA CHANGES exhibition. The silver and brass components suggest a long history. But not only the appearance is a highlight, the elaborate method used by restorer Tim Lücke for the first time also fits into the category "special". Lücke, who began work in May 2019, used dry ice blasting to clean the inside of the unit. This is a gentle and at the same time time-saving method that has rarely been used in restoration work up to now. With the help of pellets made of frozen carbon dioxide, even the smallest parts inside the machine could be cleaned without the need for major dismantling. For this purpose, the machine had to be brought outside the museum for a short time. During the working process in the exhibition hall, interested museum guests could look over Tim Lücke's shoulder. A film available online documents the restoration in the museum in fast motion.

"Because it is a method that has rarely been used until now, the project is also very exciting from a restoration perspective. We are glad that in Tim Lücke we found an experienced expert who applied dry ice cleaning in the DSM in this form for the first time," says Martin Weiss, research assistant at the DSM. The tidal calculator will be put into operation regularly in the future so that the gears do not get resinous again. Next year, this will also happen publicly under the eyes of the public. A specially commissioned showcase, behind which the demonstrations will take place in perspective, will be produced by the beginning of next year.

The restoration was made possible by the generous support of the Kulturstiftung der Länder, the German Foundation Centre, the Förderverein Deutsches Schifffahrtsmuseum e.V. and private donors*.

History of the tide calculator

With the advent of steamships in the 19th century, which made sailing times much less dependent on the weather, it became essential to be able to accurately predict water levels in ports. The Englishman William Thomson, later known as Lord Kelvin, constructed the prototype of a tide calculator in 1872. In the decades that followed, the basic principle was never changed, but optimised. When the First World War began, German hydrographers were forced to build the first model of their own, which went into operation at the Naval Observatory in Wilhelmshaven in 1915.

After this prototype was fitted with an electric printing mechanism in the 1930s it probably reached Greifswald during the Second World War, and from there it was sent to the German Hydrographic Institute in Hamburg. In 1975 it was handed over to the then newly founded German Maritime Museum in Bremerhaven, where it has since been on display in the exhibition - and is now in operation for the first time. 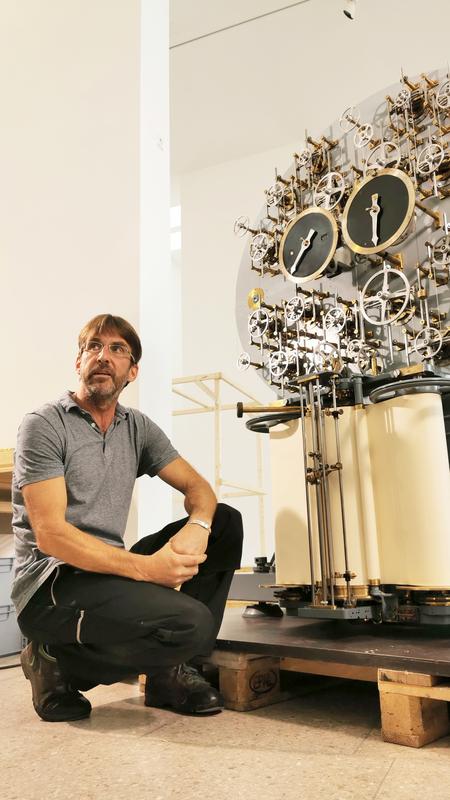 Detailed view of the tide calculator. 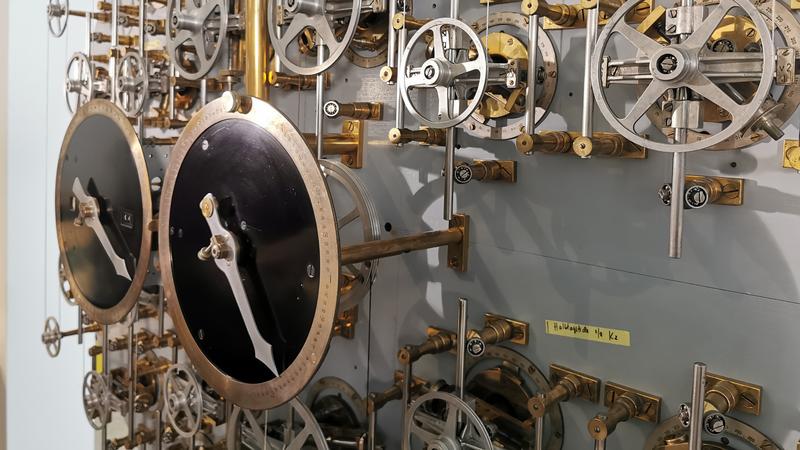