Unpredictable coral reefs of the Anthropocene

Coral reefs under high levels of human influence react unpredictably to environmental stress. This was discovered by an international team of reef researchers led by the Leibniz Centre for Tropical Marine Research (ZMT) using a comprehensive data set of over 60 reef sites in the South Pacific. This finding is of fundamental importance for the conservation and management of coral reefs.

Physical stress factors associated with climate change, such as frequent and violent storms or warming of the oceans, can severely affect coral reefs and change them. Using model-based predictions, scientists estimate how the reefs will develop after such events. Recommendations for reef management are based on such findings.

That human influences can have a major impact on coral reefs is well established by now. But how they influence the reaction of reefs to environmental stress has hardly been investigated so far. In the past, studies on the effects of stress factors like storms or global warming were mostly conducted on fairly intact reefs.

However, more than half of all coral reefs worldwide are located in close proximity to human settlements. New results of a research team led by reef ecologist Sebastian Ferse from the Leibniz Centre for Tropical Marine Research (ZMT) now show that the relationship between environmental factors and the composition of reefs breaks down as human influence increases.

For their study, the team used a comprehensive set of ecological and socio-economic data from 62 reef sites in 17 island states and territories throughout the South Pacific, where coastal dwellers have lived with and from the reefs for centuries. They assessed three types of data: Species community within the reef, physical influences such as storms, water temperature or depth, and human factors such as coastal population density and the proximity of reefs to markets.

At the different locations, the reefs were exposed to varying degrees of damaging environmental effects and human impacts. The scientists found that the more a reef was affected by humans, the less living coral was present and the more it was overgrown by turf algae. The researchers were surprised to see that the relationship between environmental factors and reef composition broke down, with environmental stressors explaining only 10% of the condition of reefs under high human influence.

"Humans modify reefs on a local level: for example, they catch certain herbivorous fish that keep algal growth in check, or subject the reefs to wastewater and agricultural inputs", explains reef ecologist Amanda Ford from the ZMT, first author of the study. Sensitive species disappear as a result, biodiversity and the gene pool in reefs decrease, and with it their ability to adapt to stress factors such as ocean warming.

An estimated half a billion people benefit from the ecosystem services of coral reefs, whether through fishing, tourism or in the form of coastal protection. Preserving these reefs and their biodiversity is of central importance for the countries and island states concerned. "To do this, we need reliable forecasts about their future in the face of climate change and events such as unusual weather patterns and severe storms, which are becoming increasingly frequent", says Sebastian Ferse. "The reef ecology of the Anthropocene must take greater account of local human influences than has been the case to date".

Coral reef off Bonetambung, an inhabited island in the Indonesian Spermonde Archipelago. 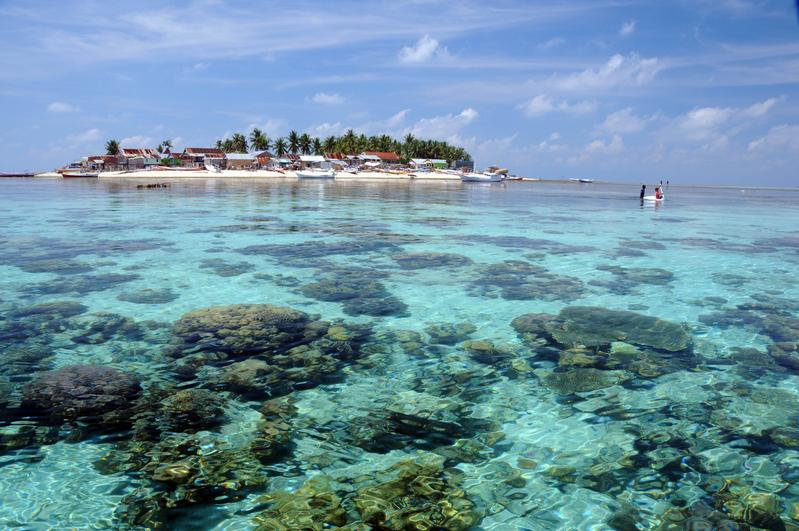