Plant fibres enable Prevotella bacteria to thrive in the microbiota

The digestive tract is densely populated with bacteria and other microorganisms. This intestinal microbiota helps the host utilise nutrients. Particularly plant fibres can only be broken down and absorbed with the help of intestinal bacteria. The composition of the microbiota is dynamic and depends, among other factors, on the diet. Scientists at the Helmholtz Centre for Infection Research (HZI) in Braunschweig have shown that the utilisation of the fibre arabinoxylan enables bacteria of the genus Prevotella to play a dominant role in the microbial ecosystem. For the study, the Braunschweig researchers cooperated with the Max Planck Unit for the Science of Pathogens in Berlin. The scientists published their results in the journal Cell Host & Microbe.

Prevotella represent one of three most abundant and prevalent genera of the human gut microbiome representing up to 50 percent of the microbiome in Prevotella-colonised individuals. So far, little research has been done on the members of this key genus. However, their prevalence depends heavily on the individual's diet. "The aim of our study was therefore to understand the ecological niche of Prevotella and which food-related factors help them play a dominant role in the microbiota," says Prof Till Strowig, head of the department "Microbial Immune Regulation" at HZI. The scientists isolated various Prevotella species from the microbiota of mice. When they colonised these species in the intestines of Prevotella-free mice fed a high-fibre standard diet, the bacteria quickly took over a dominant role in the microbiota. Adding arabinoxylan, a dietary fibre found in plant cell walls, in particular, promoted the growth of Prevotella. "We have used bioinformatic analyses to investigate which genetic factors lead to the dominance of Prevotella. We were able to show that there was a strong activation of genetic elements in the bacteria, which enable the effective utilisation of complex carbohydrates, so-called polysaccharides. These elements are called PUL (polysaccharide utilizing loci)," says Strowig. Prevotella species with a higher number of PULs were able to outcompete species with fewer PULs from the microbiota. Therefore, the researchers suspect that these elements are important in the presence of plant fibre in order to survive in the ecological niche. "However, the ecological niche is highly dynamic: When we increased the sugar or fat content in the diet of the mice, we saw a decrease in Prevotella from 50 to five percent within a short time," says Dr Eric Galvez, postdoc in Strowig's department and first author of the study.

"Intestinal bacteria are often categorised across the board as 'good' or 'bad' for health. In the case of Prevotella, however, this clear assignment is not possible at all: On the one hand, they are associated with positive health effects, such as an improved metabolisation of dietary fibres. On the other hand, there is evidence that Prevotella can have a pro-inflammatory effect," says Strowig. Prevotella is also a strongly represented genus in the microbiota of humans. Therefore, Strowig and his team have investigated whether Prevotella also use PULs in humans to prevail in this ecological niche. They analysed existing data sets to determine whether the occurrence of PULs in Prevotella copri, the most common Prevotella species in the human intestinal microbiota, depends on the diet. In fact, they found an increase in these elements in vegans, but not in vegetarians, compared to people on a meat-based diet. "We do not yet know which nutritional factors are responsible for the different PUL numbers," says Strowig.

The current study shows an association between particular PULs and the dominance of Prevotella in the microbiome. "We are already working on understanding the causal relationship and the molecular mechanisms of the genetic elements in the mouse model," says Strowig. The scientists want to use this knowledge to investigate the interactions of Prevotella with the diet and the exact ecological niche in the human microbiota.

The study team will make the isolated Prevotella species available to the research community through the Leibniz Institute DSMZ-German Collection of Microorganisms and Cell Cultures.

Please find this press release on our homepage: https://www.helmholtz-hzi.de/en/news-events/news/view/article/complete/hzi-forsc...

Helmholtz Centre for Infection Research:
Scientists at the Helmholtz Centre for Infection Research (HZI) in Braunschweig and its other sites in Germany are engaged in the study of bacterial and viral infections and the body’s defence mechanisms. They have a profound expertise in natural compound research and its exploitation as a valuable source for novel anti-infectives. As member of the Helmholtz Association and the German Center for Infection Research (DZIF) the HZI performs translational research laying the ground for the development of new treatments and vaccines against infectious diseases. http://www.helmholtz-hzi.de/en 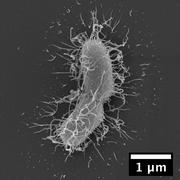 <
Scanning electron microscope image of the intestinal bacterium Prevotella rodentium. The species was ...

Scanning electron microscope image of the intestinal bacterium Prevotella rodentium. The species was isolated in the current study. 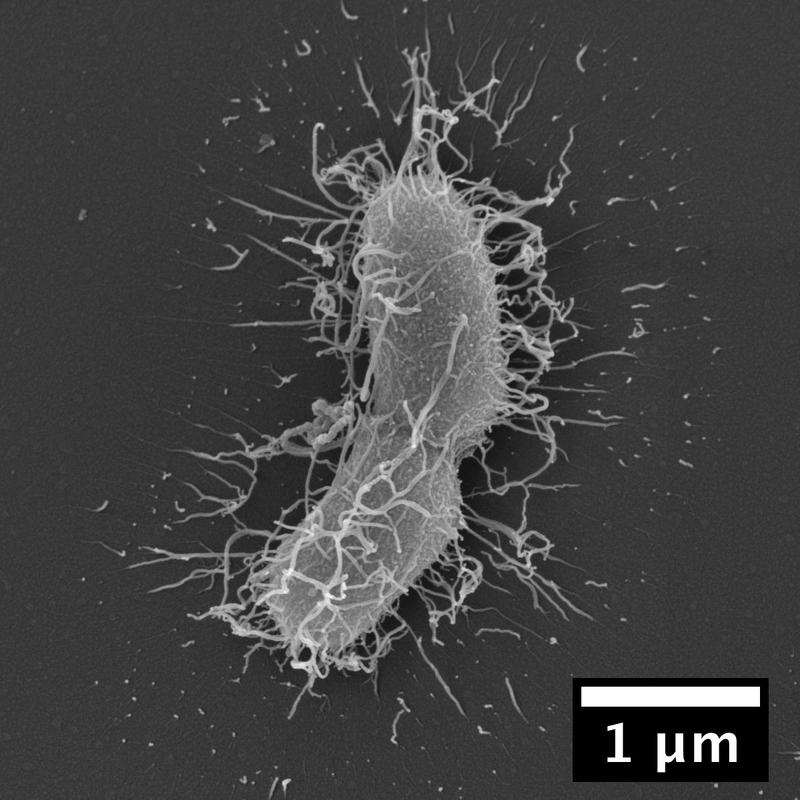