Mycorrhizing your way to sweeter tomatoes

Demand for mycorrhizal fungi in gardening and landscaping tasks is steadily climbing, given its ability to boost growth and yield as a natural fertilizer. In a successful first, scientists from the Leibniz Institute of Plant Biochemistry (IPB), partnered the INOQ GmbH and the Leibniz Institute of Plant Genetics and Crop Plant Research (IPK) to develop a mycorrhiza substrate for commercial tomato production. Large-scale trials revealed that the fruit crop of mycorrhizal plants outperformed non-mycorrhizal control plants in terms of quality and richness of content. The findings pave the way to produce suitable mycorrhiza preparations for large-scale tomato cultivation for the first time.

Demand for mycorrhizal fungi in gardening and landscaping tasks is steadily climbing, given its ability to boost growth and yield as a natural fertilizer. In a successful first, scientists from the Leibniz Institute of Plant Biochemistry (IPB), partnered the INOQ GmbH and the Leibniz Institute of Plant Genetics and Crop Plant Research (IPK) to develop a mycorrhiza substrate for commercial tomato production. Large-scale trials conducted under conventional cultivation conditions revealed that the fruit crop of mycorrhizal plants outperformed non-mycorrhizal control plants in terms of quality and richness of content for an unchanged yield. The project was funded by the BMBF-sponsored initiative SME innovative for small- and medium-sized enterprises. The findings gleaned will be directly passed on the project partner, INOQ GmbH, and pave the way to produce suitable mycorrhiza preparations for large-scale tomato cultivation for the first time.

Mycorrhiza is a widespread symbiosis between fungi and plants. Around 80 percent of all land plants are involved in this symbiosis, including around 200 different mycorrhizal fungal species. Indeed, many plant species depend on specific mycorrhizal fungi to grow to their potential. The fungus colonizes the root of the plant and supplies its host with water and nutrients, like nitrogen and phosphate. The plant returns the favor by feeding the fungus with sugar and ensuring the latter’s survival in the process. This mutualistic symbiosis helps to accelerate plant growth, boost biomass and fruit yields and often makes plants more resistant to drought stress and disease.

That said, cultivating fungi as salutary symbiosis partners of cultivated plants is not always easy. Certain plant species cannot be mycorrhized at all, while others require certain conditions to enter into symbiosis and do so preferably with certain fungal species. This explains the ongoing quest by professional manufacturers of mycorrhiza preparations to find suitable fungal species and optimal colonization conditions for selected crop species. For example, no suitable mycorrhiza substrate yet exists to cultivate tomato plants commercially in greenhouses. Conversely, tomatoes lend themselves well to being mycorrhized under laboratory conditions, something the IPB has successfully done for research purposes for years. And this is also why the Mycotom SME cooperation project was launched. The two Leibniz institutes, IPB and IPK, teamed up with INOQ GmbH as part of efforts to practically leverage mycorrhiza research insights and started their own fruitful symbiosis in January 2017.

Accordingly, the first step in the joint venture with the IPK involved seeking out tomato-specific mycorrhizal fungi that would interact with commercial varieties like Picolino and Brioso. The search eventually pinpointed Rhizophagus irregularis, a mycorrhizal fungus distributed worldwide and capable of colonizing many plant species, as a suitable choice. The IPB, led by mycorrhiza expert Professor Bettina Hause, then tested a range of soil substrates. Although large greenhouses that produce fresh tomatoes would typically use coconut mats to cultivate these plants, expanded clay is used for research purposes. "The coconut substrate proved completely unsuitable for mycorrhization," confirms Bettina Hause. "We carried out a long series of tests with substrates containing differing proportions of coconut and peat before identifying a suitable mixture on which the plants could be mycorrhized".

Fertilization, however, proved even more challenging. Tomato plants are only open to being colonized by the mycorrhizal fungus when they need the process. Laboratory conditions, meanwhile, stress the plants by giving them only 20 percent of the phosphate they need. Given this lack of nutrients, the plants mycorrhize very swiftly to extract the last minerals from the soil, aided by the fungus. Under commercial growing conditions, conversely, the plants are fully fertilized, meaning the harvest is rich and full-bodied. IPB plant experts found that the plants allowed Rhizophagus irregularis to colonize their roots at 70% phosphate levels with no loss of yield. "This makes for stable, albeit slow, mycorrhization," says Bettina Hause.

Following successful mycorrhization under large-scale cultivation conditions, the Halle scientists also discovered that the symbiosis boosts the taste of the tomatoes. The fruit of mycorrhizal plants was richer in sugar, had more antioxidant lycopene and many more amino acids compared to the non-mycorrhizal control plants. Conclusion: For healthier and tastier tomatoes, mycorrhize your plants. INOQ GmbH has also leveraged these results to develop commercially available mycorrhiza substrates which are usable by growers and gardeners as natural fertilizers. This step will also impact financially on large tomato producers in particular, given the potential savings on mineral phosphate fertilizer.

Their ability to mobilize phosphates from the soil is why mycorrhizal fungi are currently spotlighted as a means of reducing mineral fertilizers, given that inorganic fertilizer reserves of phosphorus will be used up in 40-70 years. Mycorrhizal preparations are an increasingly popular choice, not only in horticulture and landscaping, but also when recultivating post-mining landscapes, rehabilitating areas contaminated with heavy metals and salt and landfill greening and reforestation.

Growing tomatoes for research purposes in the IPB greenhouse. 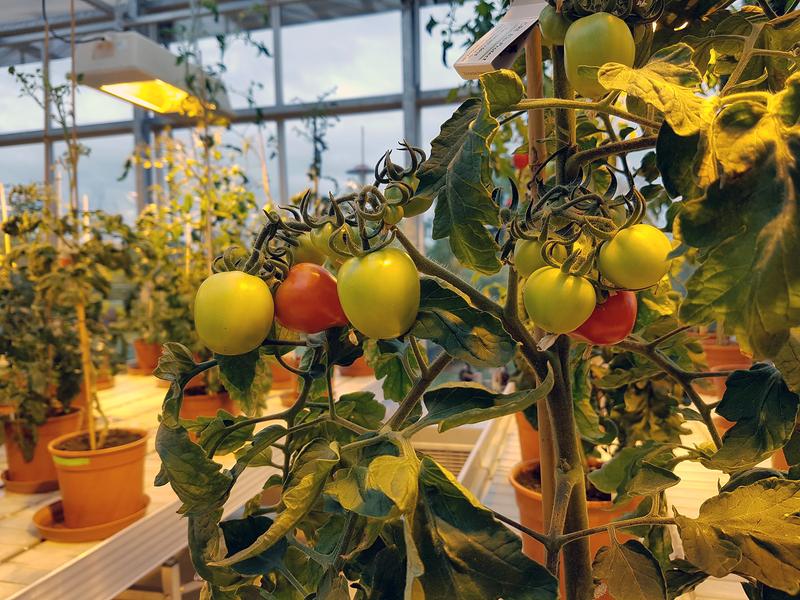