Whether axions exist is still up for debate. If they do exist, two open questions in particle physics could be resolved: The puzzle of what dark matter is made of – and the question of why the strong interaction, one of the four known forces in the universe, has a particular characteristic. The international MADMAX collaboration, is developing a search engine for these previously purely hypothetical particles under the leadership of the Max Planck Institute for Physics. The collaboration has now received important support from CERN.

Axions were introduced to explain the special role the strong interaction takes in terms of time reversal (CP) symmetry. Axions are particles that can hardly be compared with other types of particles. The mass of an axion is predicted to be somewhere between 1 microelectronvolt and 15 millielectronvolts. The mass of the axion is thus significantly below that of the lightest known particle, the neutrino.

According to theoretical models, an extremely large number of axions should have been created in the early universe. They can thus be imagined as wave phenomena of the underlying field – just like waves on the surface of water.

A bit of a light particle

In order to demonstrate the existence of axions, scientists use one of the laws of quantum mechanics. Certain particles with the same quantum numbers can transform into each other. It is also said that these particles mix with each other. Axions can thus also be described as a mixture of the axion and two light particles (photons).

“In a strong magnetic field, axions can turn into photons. In principle, these can then be detected with sensitive detectors in the form of radio waves”, explains Béla Majorovits, a scientist at the Max Planck Institute for Physics and spokesperson of the MADMAX collaboration.

Discs to prove the existence of the axion

An axion photon converter is currently being developed as part of the international MADMAX project. At a transition between two media (e.g., air and sapphire), the photon fraction of the axions generates radio waves. In order to be able to measure this extremely weak signal, many such media transitions must be created in resonance.

The MADMAX collaboration was founded in 2017; the first prototype is currently being developed. It consists of a mirror and up to 20 discs of sapphire or lanthanum aluminate, each with a diameter of 30 cm. CERN is now providing the collaboration with a 1.6 Tesla dipole magnet with a sufficiently large aperture as a test magnet: The Morpurgo magnet is part of the H8 test beam at the SPS ring. The latter also serves as a pre-accelerator for the Large Hadron Collider (LHC).

The search for yet another particle

“The approval to test our setup in the Morpurgo magnet at CERN is a crucial step for our project: We will be able to check our concept and the technologies used with the utmost care. This important preliminary work will help us guide the design of the actual experiment. We should also be able to start searching for an ‘axion-like particle’, another dark matter candidate related to the axion”, says Majorovits.

For the final experiment, the physicists need a unique dipole magnet with a field strength of about 10 Tesla and a 1.35-meter xfor the axion-photon converter. This magnet is currently being designed and R & D on the technology is progressing. If, as some theories predict, the axion has a mass of around 100 microelectronvolts, scientists could explain the special properties of the strong interaction and solve the problem of dark matter within the next 10 years.

Test set-up of the MADMAX experiments: At the transition between air and the disc material, the photon fraction generates radio waves that can be measured. 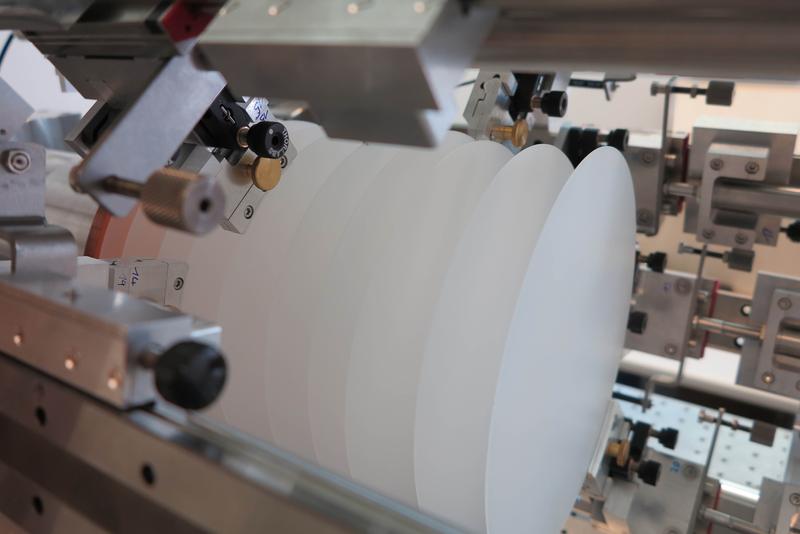