The living cells of all organisms contain a cytoskeleton that stabilises their internal structure and external shape. This also applies to magnetotactic bacteria. They produce magnetic nanoparticles which are concatenated into intracellular chains and enable them to orient themselves to the Earth's magnetic field. Microbiologists at the University of Bayreuth have now discovered a protein in the cytoskeleton of these bacteria which plays a central role in these structuring processes. The protein CcfM influences both the formation of the cellular "compass needles" and the helical shape of the bacteria. The researchers have published their discovery in the journal PNAS.

Magnetotactic bacteria of the species Magnetospirillum gryphiswaldense are unicellular organisms that live mainly in the mud at the bottom of shallow freshwater habitats. Intracellular nanoparticles, the magnetosomes, give these bacteria an unusual ability to navigate and orient their locomotion to the Earth's magnetic field. Like all living cells, their cytoskeleton comprises a complex network of thin protein filaments. How this cellular network contributes to the characteristic curvature of the bacteria, and whether there is a link to structures that control the formation and localisation of magnetosome chains was previously unknown.

However, the protein CcfM, discovered by a research group at the Bayreuth Chair of Microbiology in collaboration with researchers at the Max Planck Institute of Biochemistry in Planegg-Martinsried and the University of Kiel, now offers a key to understanding these processes. Anchored in the cell membrane of the bacteria, the protein is on the one hand involved in processes to maintain the helical shape of the cell body, which are also important in other, non-magnetotactic bacteria with similar shapes. On the other hand, however, it also influences cellular mechanisms that occur specifically only in magnetotactic bacteria, in particular the formation of the inner "compass needle". Therefore, CcfM is probably beneficial for the navigational ability of the bacteria in their natural habitat. "We have found evidence that these multiple functions of the protein CcfM could enhance the bacteria's ability to survive in the muddy sediments of water bodies, thus giving them an evolutionary advantage," says Dr. Daniel Pfeiffer, first and corresponding author of the study and research associate at the Microbiology research group.

The Bayreuth researchers have tracked down the central control functions of CcfM by producing magnetotactic bacteria that either contain no CcfM or produce too much of this protein. If the protein is missing, the curvature of the bacteria is reduced, their cell division is disrupted, and instead of a single long chain of magnetosomes, shorter chains are formed. In the case of genetic overproduction, however, the curvature of the cell body is drastically increased. In addition, the chain of magnetosomes is formed at the wrong place in the cell body, and in some cases it even breaks.

On the basis of these new findings, the authors of the study wish to further intensify their investigations of related cellular processes in magnetotactic, but also other, non-magnetic bacteria. A comprehensive understanding of the control of cell morphology in magnetotactic bacteria will also be of interest in the construction of magnetically controllable "nanorobots", which could be used in future technical or medical applications.

<
Dr. Daniel Pfeiffer in a Bayreuth microbiology laboratory next to a 3D-SIM microscope for fluorescen ...
Photo: Christian Wißler.

Dr. Daniel Pfeiffer in a Bayreuth microbiology laboratory next to a 3D-SIM microscope for fluorescence microscopy with high spatial resolution. 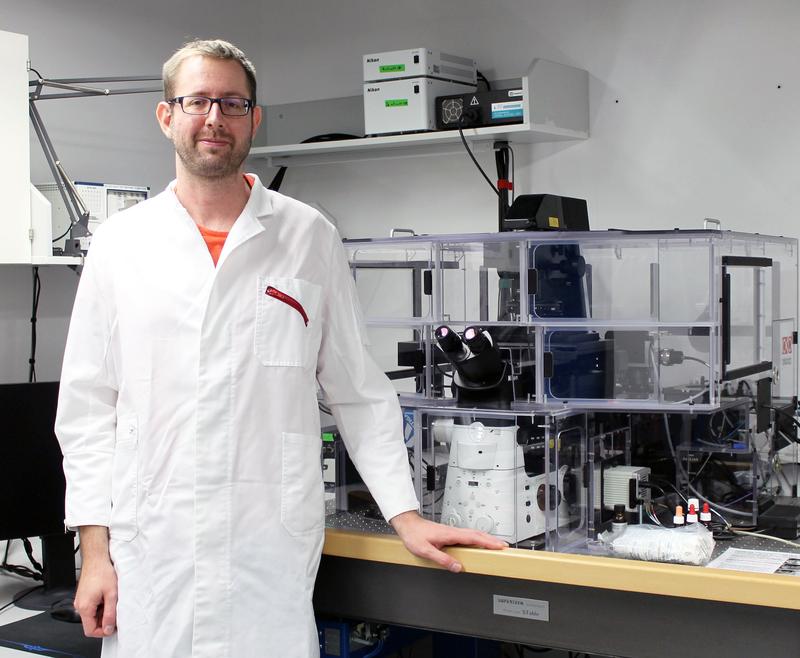 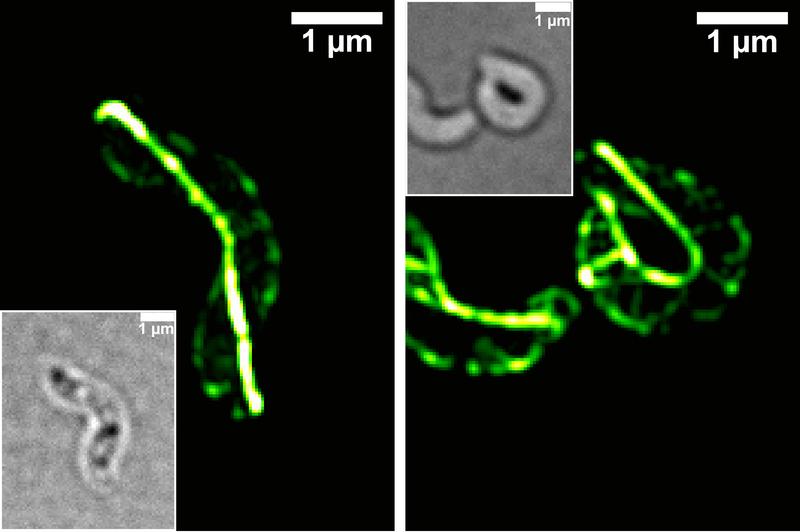