The measurement of the acceleration of our Solar System by astronomers of TU Dresden is a scientific highlight of the third Gaia catalog, which is now being released. With its publication on December 3, 2020, at 12:00 , the public will have access to high-precision astronomical data, such as positions, velocities, magnitudes and colors of about 1.8 billion astronomical objects.

What is Gaia? The aim of the ESA mission, launched on December 19, 2013, is nothing less than to produce a three-dimensional map of all astronomical objects that can be detected by the satellite's 1000 megapixel camera - an impressive average of three million stars per hour. The observations are so accurate that Gaia could trace a motion of only a few centimeters for objects that are as far away as the Moon. An international team of scientists generates scientifically usable results from this enormous amount of observational data. This calculation, the iterative solution of a huge system of equations with 10 billion unknowns, has kept supercomputers in several European research institutions busy since 2015. Among those, TU Dresden's high performance computers were heavily demanded by Prof. Klioner's team to produce the numerous interim solutions which finally resulted in decisive improvements of the new Gaia products.

The excellent quality of these results enabled the scientists in Dresden to detect a highly interesting phenomenon: The acceleration of our Solar System. In astronomy, it has been known for a while that such an acceleration causes a slow, apparent displacement of all astronomical objects, which should become noticeable as a global pattern in the measured motions. However, for nearby stars, this effect is completely superposed by the complex structure and dynamics of our Galaxy.

Only a precise measurement of extremely distant astronomical objects, so-called quasars, could reveal this acceleration effect. These extremely luminous nuclei of distant galaxies are considered to be almost fixed on the sky, which is why they are used in astronomy as reference points.

The Dresden team identified about 1.6 million Gaia objects to be quasars, which will now be published as a Gaia own celestial reference system. These quasars clearly show the expected motion pattern of the extremely small acceleration, which, according to the results produced in Dresden, is 0.23 nanometers per second squared. It is the first time that this detection is obtained using optical observations. Professor Klioner explains:

In Dresden, preparations have already commenced for the fourth Gaia catalog, which will be published in 2025. The observation data for this catalog will be awaiting the Dresden Gaia team from January 2021 at the latest, including both its very special challenges that have to be mastered, and its scientific treasures that are to be retrieved.

Caption
The image shows the apparent motion of 3000 randomly selected, distant quasars caused by the acceleration of our solar system. For each quasar an arrow indicates the direction in which it is accelerated. Note how the motions appear to converge towards a point just below right of the direction to the centre of the Milky Way, which is in the image centre. The background shows Gaia's all-sky view of our Milky Way Galaxy and neighbouring galaxies, based on the data released in the new EDR3 Gaia catalogue.

https://astro.geo.tu-dresden.de
https://www.cosmos.esa.int/web/gaia/edr3-events The ESA overview page for the EDR3 release and the programs of the individual events
https://gea.esac.esa.int/archive/ Link to the Gaia archive
https://event.dlr.de/event/gaia-early-data-release-3/ DLR live stream (on December 3)
https://www.cosmos.esa.int/web/gaia/edr3-papers All publications related to the EDR3 release 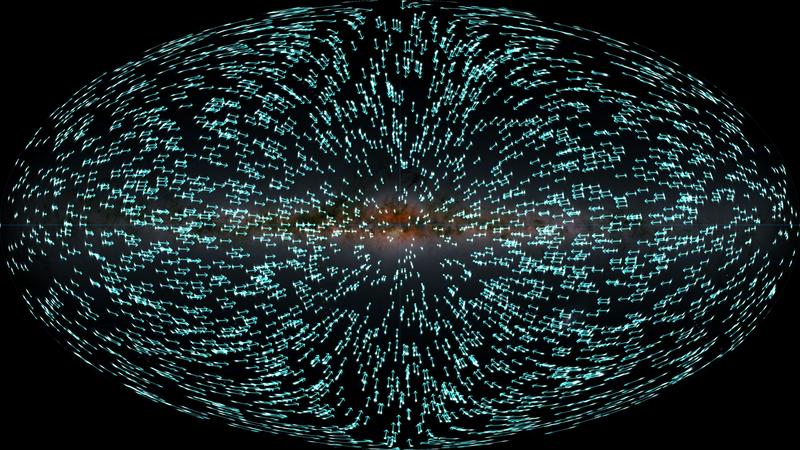