How grasses conquered the sea

About 140 million years ago, some land plants succeeded in adapting to life in the sea. These seagrasses, which today consist of around 60 species, are important members of coastal ecosystems worldwide and provide food and habitat for numerous marine organisms. However, due to the intensive human use of the coasts, seagrass meadows are under severe threat. In order to protect them in the future, scientists are working on a better understanding of the basic life processes of these plants. A research team led by Professor Birgit Classen from the Department of Pharmaceutical Biology at the Pharmaceutical Institute of Kiel University has now presented new findings on the mechanisms by which seagrasses have adapted to their marine habitat during evolution.

To this end, the researchers, who are involved in Kiel University’s priority research area Kiel Life Science (KLS), focused on the composition of the plant cell wall, which, as a shield against the environment, plays a central role in adapting to life under high saline conditions. Using the example of the native sea grass Zostera marina, they were able to demonstrate for the first time that so-called arabinogalactan proteins (AGPs) are present in the cell wall of seagrasses. In flowering land plants, these AGPs play important roles in various processes, including their adaptation to unfavorable living conditions. Analytical methods have now been used to characterize important building blocks of AGPs, including the structure of their sugar chains. It was shown that these carbohydrate structures of the AGPs of seagrasses differ significantly from those of land plants. Despite a similar basic structure, very strong charges are found in the sugar chains of seagrass AGPs. The Kiel researchers recently published their results together with Australian colleagues from La Trobe University in Melbourne in the journal Scientific Reports.

In order to study the evolutionary adaptation of seagrasses in comparison with today's terrestrial plants, the Kiel research team concentrated on specific building blocks of AGPs: "In the structural analysis of the AGP molecules, we focused primarily on the highly charged sugar fractions," explains Lukas Pfeifer, PhD student in Pharmaceutical Biology. A strong charge of carbohydrate components can be observed in many marine organisms. This is usually caused by sulfate groups or certain sugar acids, the so-called uronic acids. These uronic acids found in high amounts in Zostera AGPs enable a strong binding of calcium ions. The Kiel research team was able to prove in the laboratory that this binding actually takes place in seagrass AGPs using various methods. A high concentration of calcium near the plasma membrane offers direct protection against the penetration of sodium ions from the surrounding salt water into the cell. The analytical results were supplemented by cooperation with the researchers in Melbourne, who carried out the bioinformatic classification of the protein components of the AGPs and the identification of the enzymes responsible for biosynthesis.

"Overall, our detection of AGP molecules in seagrasses on the one hand and the elucidation of the role of their charged sugar components on the other hand support the hypothesis that these cell wall components generally play an important role in the plants' response to salt stress," summarized Pfeifer. The research work thus provides important new insights into the evolutionary adaptation mechanisms to the marine habitat. The latter is also significant in terms of man-made climate change, since the adaptation of plants to salt or drought stress is a significant challenge in our changing world.

https://www.uni-kiel.de/de/pressemitteilungen/2020/316-pfeifer-scireps-author.jp...
Caption: Lukas Pfeifer, a PhD student in the Pharmaceutical Biology Department at Kiel University, investigated how the composition of the plant cell wall in seagrasses is involved in adaptation to marine life.
© Lukas Pfeifer

https://www.uni-kiel.de/de/pressemitteilungen/2020/316-pfeifer-scirpes-zostera.j...
Caption: The native Zostera marina belongs to the seagrasses, which consist of about 60 species and are members of important coastal ecosystems worldwide.
© John Brew via Wikimedia Commons, CC BY 4.0

The native Zostera marina belongs to the seagrasses, which consist of about 60 species and are members of important coastal ecosystems worldwide. 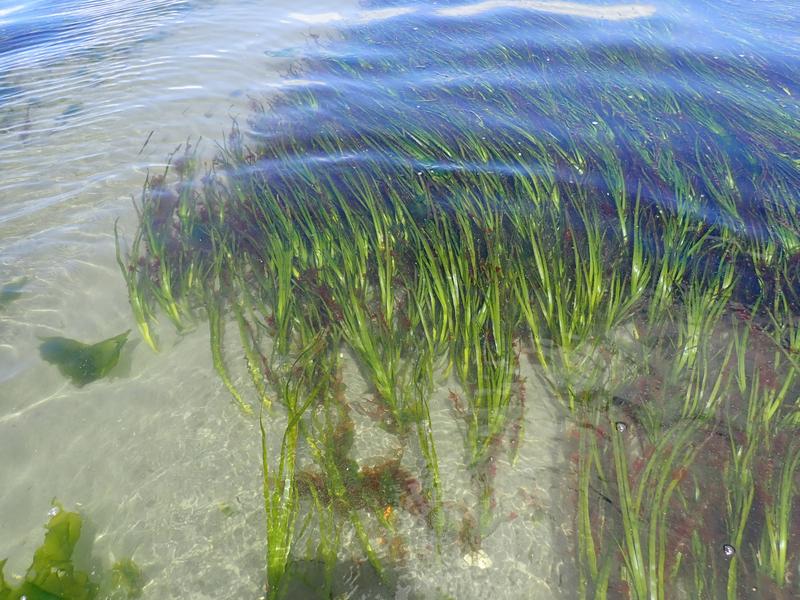