Discovery of a new catalytic intermediate in biological water oxidation

Computational simulations performed by the Pantazis group combined with spectroscopic studies led to the discovery of a new catalytic intermediate in water oxidation.

One of the greatest ambitions of modern chemistry is to reproduce with synthetic catalysts the remarkable feat of water oxidation performed in nature by photosynthetic organisms. Plants use sunlight to split water into oxygen, protons, and electrons. This is the source of the oxygen that we breathe, while the protons and electrons are used in the enzymatic reactions that incorporate atmospheric carbon dioxide into biomolecules. Despite decades of dedicated research efforts, many details of nature’s process remain shrouded in mystery. Very recently, a significant step towards deciphering the mechanism of water oxidation by plants was made by an international team of researchers led by Dr. Dimitrios Pantazis, group leader at the Max-Planck-Institut für Kohlenforschung.

Guided by spectroscopic studies and computational simulations performed by the Pantazis group during the past few years, the research team designed a series of experiments that intended to inhibit the binding of water at the active site of the enzyme responsible for water oxidation, Photosystem II. Using methanol as an inhibitor to block a protein channel that delivers water to the catalytic site, it was possible to isolate and study a previously unknown form of the catalyst, the intermediate that is responsible for binding and activating the water molecule for subsequent oxidation. Using electron paramagnetic resonance (EPR) spectroscopy in combination with advanced quantum chemical techniques, this previously unknown intermediate state was shown to contain a manganese ion with a very unusual coordination geometry that has no exact precedence in synthetic chemistry. This manganese ion has only five instead of the normal six ligands and this creates an important free coordination site where water can bind. The discovery of the new catalytic intermediate makes it necessary to reconsider the hypothetical reaction mechanisms discussed so far for water oxidation in plants, but it also has important implications for the design and operational principles of artificial water splitting systems.

The study is published as a “Hot Paper” in the prestigious journal Angewandte Chemie. 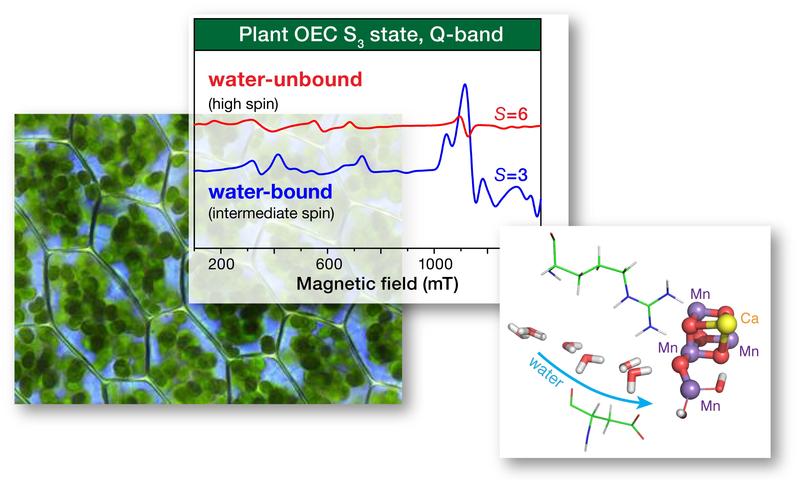