The German Astronomical Society (AG), the German association of amateur astronomers (VdS) and the Society of German-Speaking Planetariums (GDP) comment on the rapid increase in the number of satellites in the night sky. Artificial satellites have significant impact on the perception of the natural starry sky and the exploration of our universe.

Astronomical research institutes, observatories and planetariums have received a large number of concerned inquiries in recent months. The reason for this is the many satellites launched into Earth orbit by the private US space company SpaceX since May 2019, which are moving across the sky in groups.

With Starlink, SpaceX hopes to provide a satellite-based network of high-speed internet connections worldwide. The final constellation will consist of more than 30,000 satellites, which far exceeds the number of all satellites in Earth orbit to date. Other companies such as OneWeb, Amazon and others are planning or in some cases already enacting similar projects. German companies also have corresponding plans to launch large numbers of microsatellites cheaply into Earth orbits. Astronomy is aware of the importance of connecting remote regions of the Earth to the internet, as well as other technological developments. Nevertheless, implementation via the enormous increase in artificial satellites in the sky also entails considerable restrictions and risks, the consequences of which must be weighed responsibly and reduced as far as possible.

For astronomers, the protection of the night sky as a unique cultural heritage of mankind is a central concern. The experience of this natural wonder is already severely impaired in large parts of the world by inefficient and excessive artificial lighting. An uninterrupted view of the starry sky will no longer be possible due to the large number of light-reflecting artificial satellites, even in regions of the Earth that have so far been largely untroubled by light pollution. Even before the launch of the first Starlink satellites, numerous artificial satellites were observable in the night sky. With tens of thousands of additional objects orbiting the Earth, it is a realistic scenario that several thousand satellites passing over the firmament will obstruct stargazing in the night sky. Their number would then exceed that of the stars visible to the naked eye.

This will forever change the night sky, the sight of which has fascinated and inspired mankind since the beginning. In addition, the exploration of the universe for professional and amateur astronomy will be significantly affected. Images of night landscapes and celestial objects, which have always carried the fascination of astronomy to the general public and contributed to general education, will be significantly affected. Astronomy forms the basis for our exploration and use of space. With the development of sophisticated observatories, many advances have been made in the exploration of our universe. Modern telescopes scan the sky and peer into the depths of space, furthering our understanding of the universe. However, these observations are significantly threatened by the multitude of satellites. Of particular note are studies of the dynamic universe. Optical telescopes for wide-field imaging will be impacted (such as the future Vera C. Rubin Observatory), as well as the tracking and monitoring of small bodies in the solar system that could potentially collide with Earth. In addition to optical astronomy, observations in infrared and radio wavebands from space will also be significantly affected.

Radio astronomy is already increasingly disturbed by man-made signals, for example by the steadily growing volume of mobile communications. Therefore, scientists set up their observatories in very remote areas. However, the expected large number of satellites will operate around the globe so there will be no escape for radio astronomy either. German researchers do not only operate Europe’s largest radiotelescope, the 100-m telescope at Effelsberg near Bonn, but they are also involved in a large number of state-of-the-art radio observatories around the world, such as the Atacama Large Milimeter Array (ALMA) and the Square Kilometer Array (SKA) under construction in Australia and South Africa. These sites will then also be affected.

The current development also poses a threat to manned and unmanned space flight, as it inevitably increases the risk of collisions.

The degradation of the night sky has a global impact, but the approval of satellite launches is done exclusively by national authorities, such as the Federal Communications Commission in the US. We hereby express our concern about this and call for international regulations for satellite constellations to ensure the protection of the night sky over the entire electromagnetic spectrum for research and as a human cultural asset.

<
Satellites reflect sunlight and cause streaks in the starry sky in longer-exposure images.

Satellites reflect sunlight and cause streaks in the starry sky in longer-exposure images. 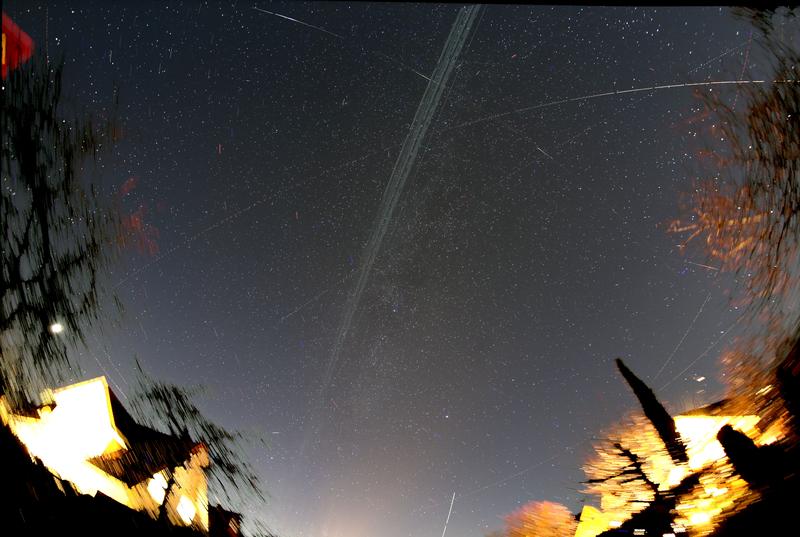