Home > Press release: Measurements of the charge radii of the ...

What does the internal structure of atomic nuclei look like? Physicists can approach this question by using precision measurements of the weight, size, and shape of atomic nuclei. An international research team, including physicists from Greifswald, has now studied the short-lived mercury isotopes 207Hg and 208Hg. For this purpose, they conducted laser-spectroscopy measurements at the European research centre CERN. Based on these measurements, researchers are able to confirm predictions about the forces and structures in these nuclei. The results of this research have been published recently in the journal Physical Review Letters (DOI: https://doi.org/10.1103/PhysRevLett.126.032502).

Similar to the electrons in atomic shells, the building blocks of the atomic nuclei – protons and neutrons – also form shell structures. At the count of 8, 20, 28, 50, 82, or 126 – also known as magic numbers of nuclear physics – the shells are filled. These atomic nuclei are particularly stable. The chemical elements are defined by the number of protons in their atomic nuclei. Although only the protons are electrically charged, the nuclear charge radii also depend on the number of neutrons in the nucleus. Thus, the charge radii of a given element differ for different isotopes. In general, the nuclear charge radius increases as a function of the number of neutrons. However, there are also peculiarities. The actual proton distribution within the nucleus is influenced by the distribution of the neutrons. And, the latter strongly depends on the number of neutrons. Once a shell has been closed, additional neutrons have to move on to the next shell. Therefore, following a shell closure, due to an increasing number of neutrons, there is a considerably steeper increase in the charge radius than before. In addition, the shape of the nuclei can change abruptly after a shell is closed. Furthermore, there are odd-even effects -these are systematic changes of the nuclear charge radii between nuclei with odd and even neutron numbers.

„The secrets of the size and shape variations of atomic nuclei are revealed by applying laser spectroscopy. With our measurements, we have studied the nuclear charge radii of the neutron-rich mercury isotopes 207Hg and 208Hg. Both nuclei have the same proton number Z=80. In terms of neutron number, they therefore exceed a magic number: With 127 neutrons, 207Hg has one neutron more and 208Hg, with 128 neutrons, even has two additional neutrons to the magic number of 126. For the first time, we have now been able to determine the charge radii of these two isotopes experimentally and to compare the results with corresponding calculations. Besides the change of the increase of the charge radius after the shell closure, we have also been able to confirm the odd-even effect between neighbouring isotopes in the chain of mercury isotopes,” reports Dr. Frank Wienholtz, who was a doctoral student at Greifswald’s Atomic and Molecular Physics Group at the time of the measurements.

207Hg and 208Hg are unstable atomic nuclei, with half-lives of 2.9 and 42 minutes. For the described measurements, the radioactive mercury isotopes first had to be produced and prepared using elaborate procedures. To this end, liquid lead (Z=82) was bombarded with high-energy protons at CERN’s ISOLDE facility https://home.cern/. However, this method only produces minute amounts of exotic mercury isotopes. The procedure also releases large amounts of the stable lead atoms 207Pb and 208Pb, which are contaminants of the tested sample.

To determine the nuclear charge radii, the mercury atoms are ionised by sequential laser transitions. The resonance frequencies of this ionisation, make it possible to deduce the nuclear properties. However, in the process of such experiments, numerous different particles are also ionised. In particular, the few mercury ions the researchers are interested in have to be distinguished from the contaminating ions of the lead atoms that have almost exactly the same weight. This task is performed by the highly sensitive and selective Greifswald multi-reflection time-of-flight mass spectrometer https://idw-online.de/de/news539611, a component of the ISOLTRAP http://isoltrap.web.cern.ch/isoltrap/ setup at CERN. In addition to the size of the charge radii, the spectrometer also precisely determined the masses of the atomic nuclei. The results, which were similar to those from previous experiments on exotic calcium atoms https://idw-online.de/de/news539611, are still being evaluated.

Apart from the Atomic and Molecular Physics Group https://physik.uni-greifswald.de/ag-schweikhard/, which belongs to the University of Greifswald’s Institute of Physics, further researchers who collaborate towards ISOLTRAP-and work at CERN http://home.cern/, the Max Planck Institute for Nuclear Physics in Heidelberg https://www.mpi-hd.mpg.de/mpi/en/, as well as from the Technische Universität Dresden https://tu-dresden.de/?set_language=en, the University of Manchester (Great Britain) https://www.manchester.ac.uk/, and the Paris-Saclay University (France) https://www.universite-paris-saclay.fr/ contributed toward this research. Several other research groups were also involved in the experiments, including laser spectroscopists from the Johannes Gutenberg University Mainz https://www.uni-mainz.de/eng/index.php.

ISOLTRAP setup at CERN https://isoltrap.web.cern.ch/
Atomic and Molecular Physics Group at the University of Greifswald https://physik.uni-greifswald.de/ag-schweikhard/
Institute of Nuclear Physics at the Technical University of Darmstadt https://www.ikp.tu-darmstadt.de/dasinstitut/index.de.jsp
Stored and Cooled Ions Dvision of the Max Planck Institute for Nuclear Physics https://www.mpi-hd.mpg.de/blaum/index.en.html

Graph:
Experimental data of the mean squared charge radius of mercury nuclei (r², in deviations from the A = 198 nucleus) as a function of mass number. The graph shows the increase of r² of the neutron-rich mercury nuclei; r² depends not only on the volume but also on the shape of the nuclei. The figure illustrates several nuclear shapes depending on the neutron number N. In addition, it demonstrates the large odd-even effect between the neutron numbers 100 and 105. The new publication focuses on the steeper increase of the charge radii of the mercury isotopes 206Hg, 207Hg, and 208Hg (marked in red). For the first time, this has been proven by experiments and reproduced by new calculations. Graph: Thomas Day Goodacre https://www.uni-greifswald.de/en/university/information/current-news/details/n/m...

<
Dinko Atanasov and Frank Wienholtz (on the right) behind the MR-ToF MS component of the ISOLTRAP set ...
Photo: Jonas Karthein 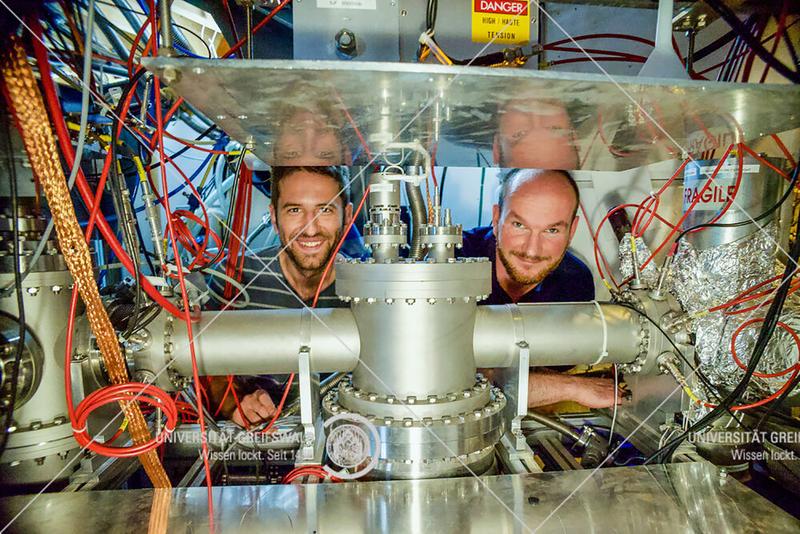