They won silver four times in a row, and now they won a gold medal again. Bibek Bhujel from Nepal, Fahrudin Delic from Bosnia-Herzegovina and Carmelo Ortiz from the Philippines secured first place for Jacobs University Bremen at the University Physics Competition (UPC). The trio prevailed against strong international competition. A total of 346 teams took part in the contest, which the English-speaking University already won in 2014. It is the only German university to have won gold medals at the UPC so far.

Sending a spacecraft to Saturn via ion propulsion or designing an unmanned aerial vehicle, a quadcopter, and analyzing its stability in the wind – the bachelor students had to choose between these tasks. "None of us were familiar with the technology of the quadcopter, so we chose the first topic," said Bibek.

The trio had 48 intensive hours to prepare a scientific paper on the topic they chose. They demonstrated how the spacecraft could leave its orbit around Earth and reach Saturn's orbit with optimal fuel consumption and maximum payload. In solving this task, the students drew on Newton's and Kepler's laws of gravity and developed a model with triple gravity deflection at the Moon and Earth. According to the model, it would take the spacecraft nine years and 73 days to travel from its starting point to Saturn.

"We worked very well as a team and were able to get into the subject quickly and thoroughly, although it stagnated a bit at the beginning," Fahrudin said. Like his fellow students, the Bosnian had applied to study at Jacobs University not least because of the excellent physics program. "The classes are small, the exchange with the professors is close and we are involved in their research projects as students." Carmelo takes a similar view. "We learn things in our courses that are immediately applicable in a research environment like the competition," he explained.

Peter Schupp, Professor of Physics at Jacobs University, is the team's Faculty Sponsor at UPC, a kind of mentor who provides organizational support for the students. For him, his group's success is also a testament to one of Jacobs University's great strengths – its diversity. "The fact that students from such different countries and cultures meet on our campus, make friends and succeed internationally is impressive. For me, it is a great pleasure to be able to teach them."

Studying in an international community. Obtaining a qualification to work on responsible tasks in a digitized and globalized society. Learning, researching and teaching across academic disciplines and countries. Strengthening people and markets with innovative solutions and advanced training programs. This is what Jacobs University Bremen stands for. Established as a private, English-medium campus university in Germany in 2001, it is continuously achieving top results in national and international university rankings. Its more than 1,500 students come from more than 120 countries with around 80% having relocated to Germany for their studies. Jacobs University’s research projects are funded by the German Research Foundation or the EU Research and Innovation program as well as by globally leading companies.
For more information: www.jacobs-university.de
Facebook | Youtube | Twitter | Instagram | Weibo

<
They secured first place for Jacobs University at the University Physics Competition (UPC; from left ... 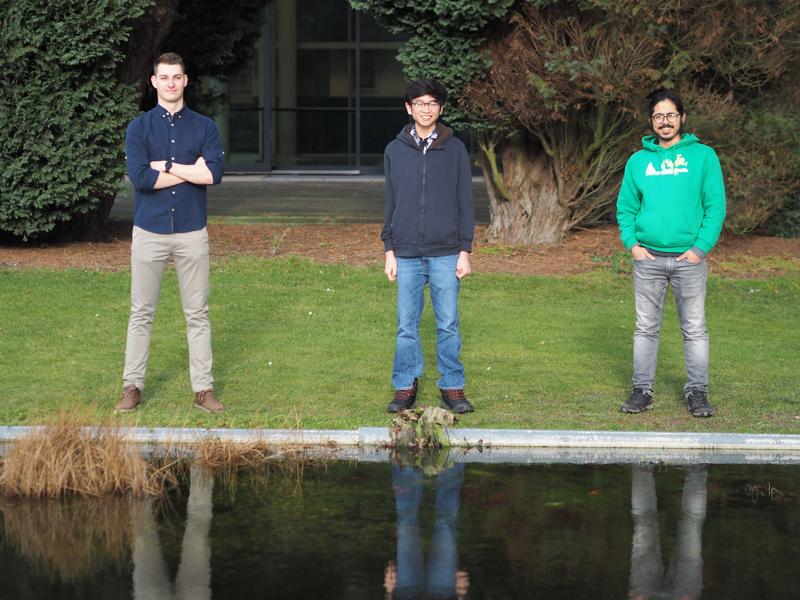