Home > Press release: The lesser evil: Start of an ...

The lesser evil: Start of an evolutionary success story

Our planet had already been colonized by microorganisms for a long time before more complex living organisms first emerged and gradually evolved into the animal and plant world we see today. Multicellular life thus arose from the very beginning in the presence of microbes, which played a decisive role in shaping the course of evolution. In turn, the living organisms that occur today often exist in a closely linked, long-term coexistence with microorganisms. These permanent communities of life in varying degrees of mutual dependence are collectively referred to as symbioses. The complex interrelationships of a host organism with the microorganisms living on and in its body, the so-called metaorganism, also represents a form of symbiosis. The evolutionary origin of symbiotic relationships is generally assumed to be based on an advantage for at least one of the organisms involved, which subsequently led to the formation of a stable community.

However, a closer look at various symbioses shows that, paradoxically, there are also numerous examples in which the host-associated microbes do not exert any positive effect on the host. A research team from the Collaborative Research Center (CRC) 1182 "Origin and Function of Metaorganisms" at Kiel University therefore proposes a new theoretical model that provides an alternative explanation for the emergence of such symbiotic relationships. Contrary to previous assumptions, their theory suggests that symbiosis could also be based on the coexistence of a host with an initially harmful microorganism. Particularly in the presence of different deleterious microorganisms, it may be advantageous for the host to accept the "lesser evil" and enter into coexistence with a microorganism that is less harmful to it. The resulting coexistence can then be the basis for subsequent mutual adaptations of host and microorganism - and ultimately lead to a beneficial host-microbe symbiosis, which has proven to be a successful model in many symbiotic relationships. The researchers led by Professor Arne Traulsen of the Max-Planck-Institute for Evolutionary Biology (MPI-EB) in Plön and Kiel University’s Professor Hinrich Schulenburg, together with Professor Angela Douglas of Cornell University, published the new findings yesterday in the renowned journal Proceedings of the National Academy of Sciences of the United States of America (PNAS).

In nature, there are numerous examples of host organisms offering advantages to the microbes associated with them - and these in turn can positively influence their hosts. The human body and its colonizing microbes also interact in a similar fashion. However, how these forms of cooperation might have arisen, especially when host and microbe initially have independent lifestyles, has not yet been adequately elucidated. To address this question, the CRC 1182 team developed a theoretical model that maps the life cycles of host organisms and microbes in different, spatially separated habitats. Using this model, the researchers were able to observe how different microorganisms colonize hosts without offering any specific advantage to the host and subsequently spread together with the hosts to other habitats and accumulate there.

"We modeled how two different free-living bacterial species behave when living together in a habitat with a host organism that is not yet microbially colonized," describes first author Dr Michael Sieber, a scientist in the Department of Evolutionary Theory at MPI-EB and CRC 1182 member. "There is an increased accumulation of one of the two bacterial species in the host organism after a certain period of time. This is actually the less competitive species, since it grows more slowly, but its presence is less detrimental to the host organism," Sieber continued. This colonization process, i.e. the permanent accumulation of the bacterium in the host, then forms the prerequisite for the bacterium to reach further suitable habitats together with the host. As a consequence, the microbe now associates with a host, subsequently allowing the evolution of more specific adaptations between host and bacterium. "Thus, while bacterial enrichment in the host is not per se an indicator of beneficial host-microbe symbiosis, it can be viewed as a starting point for the evolution of specific mutual adaptations. In a sense, the choice of the lesser evil points the way to the evolution of a mutually successful symbiosis," Sieber summarizes.

The value of theoretical models

The new results from theoretical evolutionary research thus provide a valuable building block for expanding conceptual understanding about the origin of symbioses. "Mathematical modeling is particularly helpful in researching the coexistence of hosts and microorganisms in order to theoretically trace the starting point of their joint evolution and thus better understand it," emphasizes Traulsen, head of the Department of Evolutionary Theory at MPI-EB. "The new publication also exemplifies how the work of experimentally and theoretically oriented researchers in the CRC 1182 through interdisciplinary collaboration complements each other in order to gain new perspectives on the emergence of symbiotic communities ubiquitous in nature," emphasizes Schulenburg, vice spokesperson of the CRC 1182. "The contribution of Professor Angela Douglas from our scientific advisory board was particularly important, especially her insights into the distribution of symbiotic microorganisms in insects, which are central to the developed theoretical model," Schulenburg adds.

Dr Michael Sieber (left) and Prof. Arne Traulsen from the Max Planck Institute for Evolutionary Biology in Plön propose a new approach to explaining the origin of symbioses. 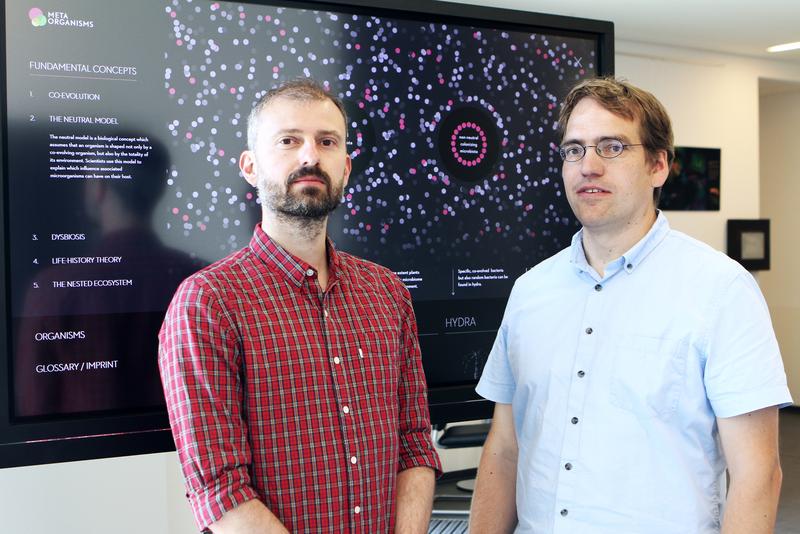