Electrons in a plaster

Physicists in Regensburg and Marburg have tailored the mutual interaction of electrons in an atomically thin solid by simply covering it with a crystal featuring hand-picked lattice dynamics.

In a cubic centimeter of a solid there are typically 10²³ electrons. In this massive many-body system, seemingly simple pairwise electron-electron interaction can cause extremely complex correlations and exotic behavior, such as superconductivity. This quantum phenomenon turns a solid into a perfect conductor, which carries dissipationless electric currents. Usually, such coveted behavior is a “God-given” trait of specific solids. Yet, the discovery of atomically thin layered materials, such as graphene – a monolayer of graphite – or transition metal dichalcogenides (TMDCs), has opened a new creative lab to tailor electron-electron interactions and shape phase transitions. For example, by stacking graphene layers under specific angles, superconducting behavior can be created. Yet, theory has predicted that also coupling of electrons with quantized vibrations of the crystal lattice – called phonons – may critically influence the way electrons interact with each other.

Physicists from Regensburg led by Rupert Huber in collaboration with Ermin Malic's group at Philipps University in Marburg have now come up with a new idea to fine tune the interaction between electrons by coupling to polar crystal lattice vibrations of a neighboring layer. This scenario can be realized by simply covering TMDC monolayers with a capping layer of gypsum, a material commonly used in plaster casts. To measure the coupling strength between electrons and phonons, physicists first excited electrons in the semiconducting TMDC monolayer with an ultrashort laser pulse, leaving corresponding holes behind at their original sites. Electrons and holes carry opposite charges and are thus bound to each other by their Coulomb attraction - just like electrons are bound to the nucleus in the hydrogen atom - forming so-called excitons. By observing their atom-like energy structure with subsequent ultrashort light pulse in the infrared, one can calibrate the interaction between the two particles.

The surprising finding was that once the TMDC layers were covered with a thin gypsum cap, the structure of the excitons was substantially modified. “The mere spatial proximity of the gypsum layer is sufficient to strongly couple the internal structure of the excitons to polar lattice vibrations of gypsum”, says Philipp Merkl, the first author of the study. Even though this coupling mechanism connects electrons and phonons in different atomically thin layers, they interact so strongly that they essentially merge into new mixed particles. Once the researchers found the hang, they started playing with this new quantum effect: By placing an essentially inert third atomically thin layer as a spacer between the TMDC and the gypsum, they managed to adjust the spatial distance between the electrons and the phonons with atomic precision. “This strategy allowed us to fine tune the coupling strength with even higher precision”, corresponding author Dr. Chaw-Keong Yong adds. And he is convinced: “These findings could open new pathways to tailor electronic correlations in two-dimensional materials. In the future, this could enable man-made phase transitions in artificially stacked heterostructures and novel physical quantum properties, which could find applications in prospective lossless electronics and quantum information devices.” 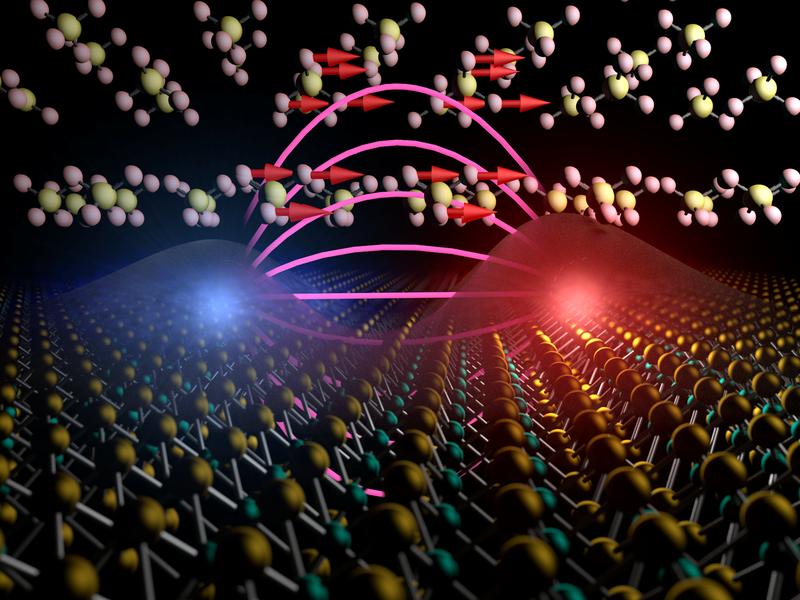