A network made up of agents from the economy, science, and health sector, which is being led by the University of Bremen, is developing 3D technologies for surgeons. The aids for surgery planning are particularly advanced.

Liver surgery requires the highest level of precision as the organ is made up of a complex vascular architecture and is responsible for essential bodily tasks. Computer-aided 3D technologies can help surgeons to gain a better spatial understanding prior to surgery in order to reduce the connected risks. A network led by the Center for Computing Technologies (TZI) at the University of Bremen has now developed 3D applications that especially support surgery planning, carrying out of the procedure, and the training of future surgeons.

The planning of operative removal of parts of the liver – so-called liver resection – with 3D models offers great advantages. The CT and MRT images used in diagnostics only offer two-dimensional views. They are processed and become colored 3D visualizations in the VIVATOP project (Versatile Immersive Virtual and Augmented Tangible OP). “In this way, the spatial depiction of an organ can be turned, flipped over, manipulated, and used for detailed surgery planning in real-time – or during the procedure as an aid,” says project leader Professor Rainer Malaka from TZI. “Despite the large dataset that must be continually re-calculated when doing this, no delays occur.”

Automatically created shadows simplify the perception of depth within the organ, its complex arterial and venous vascular architecture, as well as their anatomical variations. Further functions enable the precise measuring of distances between two points and trigger a warning alarm if a planned incision would damage important blood vessels, for example.

VR and AR Will Play Important Role in the Future

One special feature is that the application users can use these functions in VR (virtual reality) and AR (augmented reality). Using standard VR headsets, an interdisciplinary team of doctors can discuss the procedure in detail before carrying it out and can turn and measure the organ by means of gestures.

During the first tests using real surgery planning, where this procedure was implemented in addition to traditional methods, surgeons were already able to confirm the benefits in practice: “We had a far better spatial understanding of the liver that we were to operate on,” reports Professor Dirk Weyhe, Senior Visceral Surgeon at Pius Hospital Oldenburg, after use. In addition, the procedures were successfully implemented in the interdisciplinary context of a tumor board – a case discussion with doctors from various specialties. This made a better judgement of the surgical treatment of patients possible.

The AR procedure is to be mainly used during surgery. For example, the 3D model could appear on the headsets of surgeons and be shown on top of the real surgery area, in order for them to orient themselves spatially.

Lifelike Liver from a 3D Printer

At the same time, the parties involved in the project developed solutions to make it possible for doctors to create an extremely lifelike, physical 3D representation of the organ alongside the visual image. Case-specific models from the 3D printer are to support the spatial observation, understanding, and recognition of individual diagnosis. In this way, VIVATOP is opening up an entirely new dimension of surgical training, both in education and for the preparation of patient-specific surgery. “We are experimenting with different materials in order to enable the best possible haptic experience. The users will be prepared more precisely for the problems of each case,” explains Rainer Malaka. A further option is the integration of sensors in the physical 3D models. This could allow surgeons to receive immediate, valuable feedback if they make mistakes during training. Thus, this would enable training to be experienced interactively.

In the frame of VIVATOP, additional 3D solutions that accompany the planned patient course are being developed – from therapy planning to surgery planning and from the surgery itself to patient consultations. The technologies also support the training of surgeons as well as long-distance cooperations.

The project is coordinated by the working group Digital Media Lab (Professor Rainer Malaka) at the TZI, University of Bremen, and supported by the working group Computer Graphics and Virtual Reality (Prof. Dr. Gabriel Zachmann). These teams are primarily responsible for the VR interactions, or rather the VR algorithms. The Pius Hospital Oldenburg/University Hospital for Visceral Surgery provides the clinical expertise and makes the image data available. The Frauenhofer MEVIS: Institute for Digital Medicine uses said data to produce virtual reality organ models for AR / VR and the 3D prints, whilst apoQlar GmbH and cirp GmbH are involved as specialists in the fields of augmented reality and 3D printing respectively. The areas of training and further education are led by SZENARIS GmbH.

The Federal Ministry of Education and Research (BMBF) is funding the VIVATOP project with a total of 2.2 million euros.

<
Surgery with an AR headset: Surgeons will be able to see 3D models above the real field of surgery i ...

Surgery with an AR headset: Surgeons will be able to see 3D models above the real field of surgery in the future. 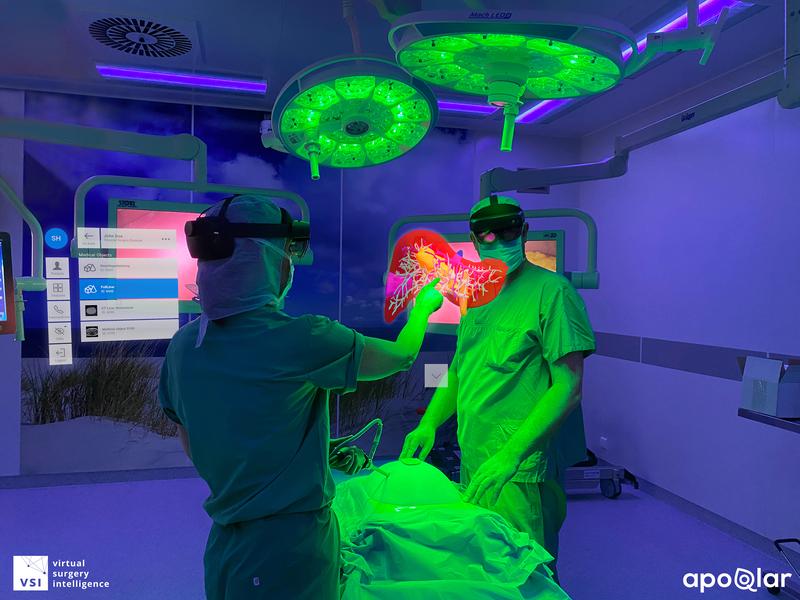