If electric vehicles are to achieve greater distances, it’s not only a matter of optimizing their batteries. Instead, the entire power train has to be improved. A Fraunhofer team is therefore developing electronic control units, so-called power inverters, which convert the energy between battery and motor much more efficiently than is the case today.

When it comes to an electric car’s range, many of us automatically think of the battery. The more energy a battery can store, the further the car can go. The battery, though, is not the be-all and end-all. In actual fact, the drive train also plays a pivotal role. Experts from the Fraunhofer Institute for Reliability and Microintegration IZM in Berlin, for instance, are getting down to work on the power inverter. This device converts the direct current from the battery into the alternating current that drives the electric motor. Because of its central position between battery and motor, high electric currents flow through the power inverter and its transistors. To prevent the device from heating up like a toaster, the heat has to be discharged over cooling elements.

Range extended by up to six percent

In the SiCeffizient project, experts from Fraunhofer IZM and its industrial partners are now making transistors using especially efficient, silicon carbide (SiC) semiconductors, which dissipate less power as electric current flows through them. These semiconductors, though, are relatively expensive. It would therefore make sense to have the minimum number of transistors. But because each one would dissipate more power and heat up more intensely, they need to be cooled particularly well. The cooling elements of the power inverters have now been completely redesigned, the idea being to keep the semiconductor cooler while maintaining the same dissipation rate.

Particularly when the vehicle is accelerating, braking and traveling at high speeds, power is lost from the inverter as large quantities of current flow back and forth between motor, power inverter and battery. SiC semiconductors reduce these losses. “We expect that by optimizing the drive train in this way, the range of electric cars will ultimately be extended by up to six percent,” says Eugen Erhardt, responsible for the SiCeffizient project at IZM. Six percent may not sound like much. But in actual fact, it’s a great deal. When it comes to electric car batteries, this kind of performance boost can only be achieved by increasing the number of batteries or through considerable research effort.

Power modules are always composed of different materials to take over the required different functions. Here's the problem: When heated, the dissimilar materials expand at such different rates that stresses occur in the structure. This can cause the power inverter to crack and fail. The new cooling element solves this problem as well. Because the metal plates are kept extremely thin, they are able to compensate the stresses occurring as they are heated or cooled by deforming slightly. As a result, the entire thermo-electrical structure is very flexible. Importantly, this spares the expensive SiC semiconductors and extends their service life.

And there’s something else that reduces the stress in the new power inverter modules. They are not connected to other electronic components in the usual way by solid, copper conductor tracks. Instead, the structure comprising the cooling element and the SiC transistors is linked to the rest of the electronic system by stranded, flexible, fine copper wires.

The new power inverter will be tested at project partner Robert Bosch over the next few months. The Porsche company will then install the device in a newly designed drive train, which is precisely matched to the SiC structure. “We still have some way to go before the device is ready to go into production,” says Eugen Erhardt. “In the first instance, we are pulling everything together to create a prototype. The individual process steps will then need to be further optimized.” 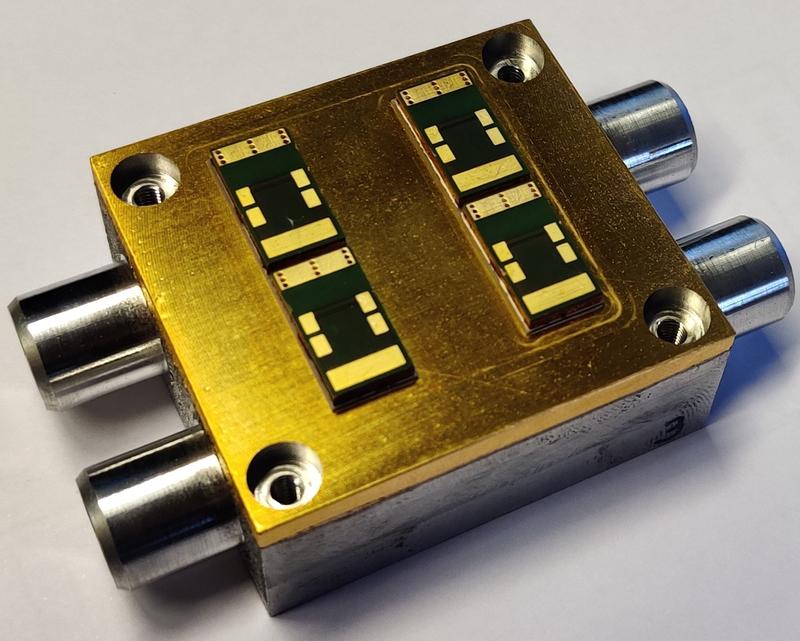