MPIfR’s 100m radio telescope celebrates its 50th birthday in 2021. The construction of the telescope in an Eifel valley about 40 km southwest of Bonn took place in three and a half years from 1967 to 1971. On May 12, 1971, an official opening was celebrated at the site of the telescope. A number of guests from research and politics were welcomed on site for the opening. During the following five decades, the instrument underwent continuous technical upgrades, so that it is still one of the most powerful radio telescopes on Earth today. The 100m telescope is still a central part of the scientific work of the institute.

Since its beginnings in the 1930s, radio astronomy has become an important method for ex-ploring the universe, because it penetrates into depths of the universe that remain blocked to visible light. For example, the discovery of new celestial bodies such as quasars and pulsars, as well as distant galaxies, can be attributed to this branch of astronomy. At least four Nobel Prizes in physics have been awarded for radio astronomical results. Custom-built telescopes are used to observe radio waves. In Germany, the 100m radio telescope of the Max Planck Institute for Radio Astronomy (MPIfR) is by far the largest of its kind - 50 years after its completion, it is still the largest fully steerable radio telescope in Europe and the second larg-est on Earth.

As a retrospective of 50 years of successful research work with the 100-m radio telescope Ef-felsberg, a new hiking trail, the "Time Travel Trail", will be opened in the neighbourhood of the Effelsberg telescope these days. It describes a range of specific events from these five decades at a total of 20 stations, from the opening of the radio telescope in 1971 to the 50-year anniversary in this year 2021.

These include both scientific and technical milestones, from the first discovery of the molecules water and ammonia outside the boundaries of our Milky Way in 1977/79 to a world record in angular resolution of only 11 microarcseconds (equivalent to the diameter of a 1-cent coin on the surface of the Moon) by Space VLBI observations including the 100-m telescope. It also features technical milestones such as the installation of a new subreflector with active-surface elements in 2006 and the commissioning of a second radio telescope on site, the Effelsberg station of the European LOFAR telescope network.

Fig. 1 shows the 100 m radio telescope shortly before its opening in 1971. In this picture it can be seen very nicely that the lower elements of the supporting structure do not appear in white, but rather dark. In fact, this part of the telescope was initially painted in blue. However, the resulting bad temperature behavior very quickly led to re-painting this part of the telescope in white as well. Painting is still a regular part of the annual maintenance work at the Effelsberg telescope. The painters come every summer for about eight weeks in July/August. Then painting work takes place during the day, while at night the telescope is still available for an astronomical measurement program.

In Fig.2, Prof. Reimar Lüst (Chairman of the Science Council) is shown in the front row on the left, next to him Prof. Otto Hachenberg, the founding director of the MPIfR. The fourth from the left is Johannes Rau, Minister of Science of North Rhine-Westphalia in 1971, and to his right the Federal Minister of Research, Hans Leussink. On the far right of this row is Prof. Richard Wielebinski, also one of the first generation directors at the MPIfR. The third director at the MPIfR, Prof. Peter G. Mezger, is not visible in this photo. Another photo from May 12, 1971 shows the control room of the Effelsberg radio observatory, with MPIfR Director Otto Hachenberg in conversation with Federal Research Minister Hans Leussink.

Today, the MPIfR is still conducted by three directors who pursue different aspects of radio astronomy in their respective research departments.

Prof. Michael Kramer is head of the department "Fundamental Physics in Radio Astronomy", which investigates questions of fundamental physics, from cosmic magnetic fields to gravita-tion. Observations with the Effelsberg radio telescope are carried out, for example, in large collaborations such as the "European Pulsar Timing Array" (EPTA) or the "High Time Resolu-tion Universe" (HTRU), in which the department is significantly involved.

Prof. J. Anton Zensus is the head of the research department "Radio Astronomy/VLBI", which usually performs observations with the 100 m radio telescope not in a single dish mode, but connected to an interferometer in various continental and global networks of radio tele-scopes, thus enabling observations at the highest angular resolution. These include, for exam-ple, the "European VLBI Network" (eVLBI), the "Global Millimeter-VLBI Array" (GMVA), and the new "M2FINDERS" project, for which Anton Zensus was recently awarded one of the prestigious "Advanced Research Grants" of the European Research Council (ERC).

Prof. Karl M. Menten is the head of the research department "Millimeter and Submillimeter Astronomy" at the MPIfR. Collaborations within the research work in this department using the 100-m telescope include "The Bar and Spiral Structure Legacy (BeSSeL) Survey" and the "Megamaser Cosmology Project."

However, a larger part of the research work in the "Millimeter and Submillimeter Astronomy" department takes place at higher radio frequencies in the millimeter and submillimeter wave-length ranges, using radio telescopes such as APEX in Chile and the flying observatory SO-FIA. In these wavelength ranges, the 100-m telescope with its cutoff frequency of 96 GHz (3.1 mm wavelength) is no longer used.

In a recent release of the MPIfR, the contribution of the Effelsberg radio telescope to the investigation of the central region of the galaxy M87 (M87*) was acknowledged. In the center of this galaxy, a “photo” of the shadow of a black hole could be taken for the first time (“Multi-frequency observations of M87*”, issued April 14, 2021).

Another focus of the observing program for the 100-m radio telescope is on pulsars and fast radio bursts (FRBs). These observations require very high time resolution in the range of microseconds. The importance of the 100-m telescope for this type of observations was described in another press release last month ("In pursuit of a famous radio burst", issued April 19, 2021).

"Even after 50 years, our radio telescope is a top-class astronomical instrument. Over the past decades, apart from the basic structure, almost all components have been constantly renewed and improved. The demand for observing time remains high, and observation requests come from scientists all over the world," says Dr. Alex Kraus, station manager of the Effelsberg Radio Observatory.

"Effelsberg has repeatedly shown its versatility in the past. The ability to keep using new, specially developed cutting-edge technology for the receiver systems will keep the Effelsberg radio telescope at the top of the world for the foreseeable future," concludes Prof. Michael Kramer, director at the MPIfR and responsible for the radio observatory with the 100-m telescope.

With a diameter of 100 meters, the Effelsberg radio telescope is one of the largest fully steerable radio telescopes on Earth. The telescope is used to observe pulsars, cold gas and dust nebulae, the sites of star formation, jets from black holes and the nuclei of distant galaxies, as well as radio emission and magnetic fields in our Milky Way and nearby galaxies. The Effelsberg telescope is an important constituent of VLBI, the worldwide network of radio telescopes. The combination of different telescopes in interferometric operation makes it possible to obtain the sharpest images of the universe.

<
The picture shows the 100 m radio telescope Effelsberg a little before its opening in May 1971. The ...

The picture shows the 100 m radio telescope Effelsberg a little before its opening in May 1971. The first scientific observation ("First Light") already took place on April 23, 1971. 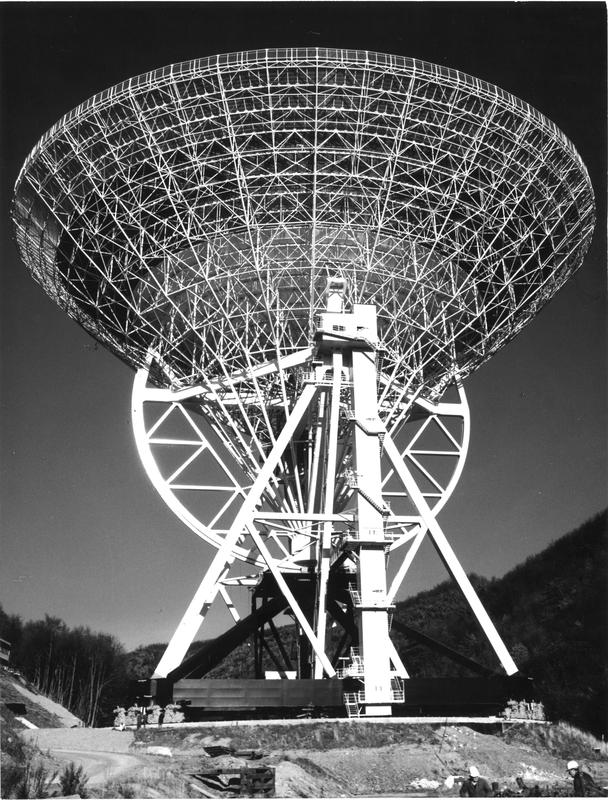 Guests of honor at the opening of the Effelsberg 100-m radio telescope on May 12, 1971. Front row, from the left: Reimar Lüst, Otto Hachenberg, Richard Langeheine, Johannes Rau, and Hans Leussink. At the right:: Richard Wielebinski. 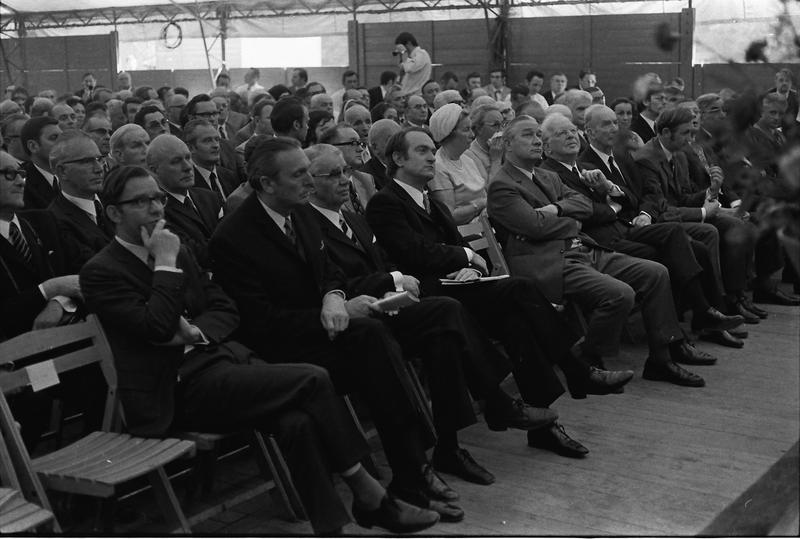