Construction phase of the innovative, interdisciplinary research institute in Erlangen begins. Minister-President and Minister of Economic Affairs recognize courage of scientists from physics and medicine to break new ground together. Söder: "We have the greatest chance to discover new things when we combine disciplines."

"A fascinating project is emerging here," said the Bavarian Minister-President Dr. Markus Söder during the laying of the foundation stone of the new Max-Planck-Zentrum für Physik und Medizin (MPZPM, Max Planck Centre for Physics and Medicine) in Erlangen. In the fight against cancer, for example, it is important to combine new methods at the cellular level with artificial intelligence or quantum computers. Therefore, the State of Bavaria is investing almost 60 million euros in the institute to "create an ecosystem for ideas and creativity" and to accelerate the process in which new scientific knowledge is generated. The Erlangen location with its prominent medical research, its “Medical Valley”, is particularly suitable for this. And the investment in the MPZPM is an important signal to anchor the Max Planck Society in Northern Bavaria.
"This is a very important day for Bavaria today, a very important day for health," assured Hubert Aiwanger, Bavarian State Minister for Economic Affairs, Regional Development and Energy. "What will be researched and developed here in the future will also give important impulses to the Bavarian economy," added the Minister of Economic Affairs, whose area of responsibility includes the non-university research institutions such as the Max Planck Society in the Free State. "I am pleased that in a few years people will meet at this location who otherwise would not have come together," added Florian Janik, Mayor of Erlangen.
The MPZPM research groups are still scattered all over Erlangen. At the beginning of 2024, they will move into the new building on the grounds of the Erlangen University Hospital, whose structural engineering can now be erected after the excavation of the building pit. The building, with its modern laboratories and offices, will provide space for about 180 employees on five floors and 5700 square metres of floor space. They will conduct research within walking distance of the doctors in the clinics and will be able to reach their colleagues in the other institutes that are currently being built via glass bridges. The architecture thus also reflects the close ties between the founders of the MPZPM. Three renowned organisations are behind the centre: the Max Planck Institute for the Science of Light (MPL), the Friedrich Alexander University Erlangen-Nürnberg (FAU) and the University Hospital Erlangen.
The researchers of the three partners who come together in the MPZPM use modern mathematical and physical methods - especially from optics - to give new impetus to the biomedical disciplines. For example, by developing a novel microscope that films corona viruses attacking cells. Or by building a machine that measures how elastic blood cells are and thereby detects whether cancer cells are becoming dangerous to the body. Or by programming simulations to better understand the behaviour of dangerous bacteria.

"Great breakthroughs have been made in science by merging research fields and creating entirely new disciplines," said Martin Stratmann, President of the Max Planck Society, during the event at the building site. However, given the differentiation of science today, it is no longer so easy to meet at eye level. This is especially true for physicists, who go into more and more detail and deal with individual photons, atoms or elementary particles, and for physicians, who deal with people and their health as a whole.
Erlangen is the ideal place for such encounters because the thematic orientation of the institutions coincides and "the will of the actors to overcome borders is always noticeable.” Looking at the state capital, the MPG President paraphrased a famous quote by the Nobel Prize winner for literature Thomas Mann: "Munich shines, but Erlangen beams!"
Axel Brakhage, Vice-President of the German Research Foundation, agreed with him and said: "The MPZPM is a rarity that can become a blueprint for further institutional cooperation in research." Joachim Hornegger, President of the Friedrich Alexander University Erlangen-Nürnberg (FAU), also emphasised this claim: "We want to get to the bottom of the questions that determine life, we want to understand how to stay healthy and how to fight diseases." And Erlangen should be the "place to be" in five years' time when it comes to physics and medicine. Markus F. Neurath, Dean of the Medical Faculty at FAU, emphasised as a special feature of the MPZPM that the centre was being built "in the immediate vicinity of patient care at the university hospital", which facilitated exchange.
However, some of the speakers also recalled the victims of euthanasia crimes who perished in the neighbouring historical sanatorium and nursing home (HuPfla) during National Socialism. Part of the former patient wing of the building has given way to the new MPZPM building - which was controversial in Erlangen's urban society for a long time. Vahid Sandoghdar, spokesperson for the MPZPM and director at the Max Planck Institute for the Physics of Light, from which the idea to found a centre for physics and medicine in Erlangen originated, nevertheless thanked the citizens of the city: they were a good example "of how to deal with differences of opinion and make constructive compromises." For the building will in future become part of a "place of remembrance and future" in Erlangen - a project that the MPZPM also supports.

Minister-President Markus Söder and Vahid Sandoghdar, spokesperson of the MPZPM, present the time capsule, which is filled with objects from research. 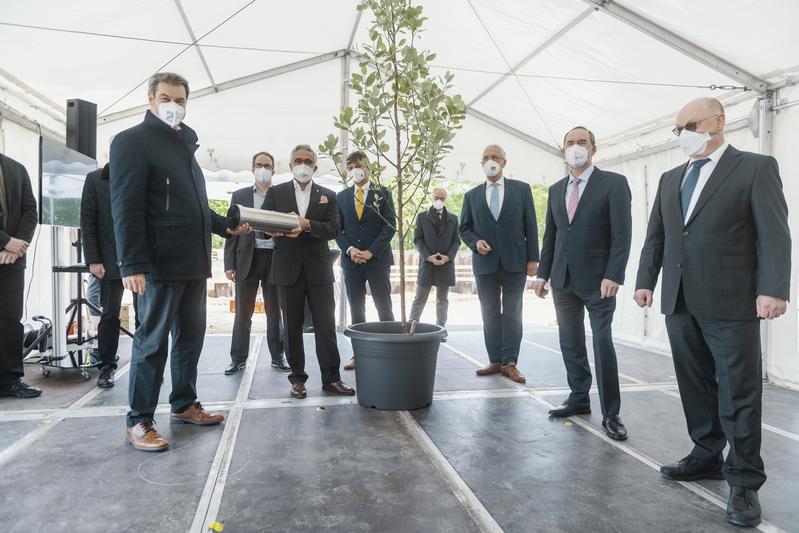