Muscles have an enormous ability to regenerate, however this decreases during aging. Researchers at the Leibniz Institute on Aging - Fritz Lipmann Institute (FLI) in Jena, Germany, discovered reasons for the regenerative decline during aging. Intrinsic changes in muscle stem cells (MuSCs) alter their proteome in addition to changes in the stem cell niche. By investigating the interplay between changes in the proteome of MuSCs and in their niche, the study published in Cell Reports provides a better understanding of how muscle stem cells are affected during aging.

Jena. Skeletal muscle has a remarkable ability to regenerate that depends on muscle stem cells (MuSCs) - also termed satellite cells. If, for example, damage to the muscle occurs because of an injury, MuSCs start to divide very quickly and replace the damaged muscle tissue. In this process, MuSCs interact with their immediate cellular environment, also known as the stem cell niche. The interaction with the niche is critical to provide MuSCs with the proper cues for self-renewal, proliferation and differentiation.

A major component of the MuSC niche is the extracellular matrix (ECM), which is remodeled by various cell types during regeneration. Multiple studies have demonstrated the critical role of different ECM components for MuSC functionality. Timely remodeling of the niche is a prerequisite for proper regeneration. This process is mediated by the controlled activation of different cell types, such as macrophages and fibroblasts.

During aging the regenerative capacity of skeletal muscle declines, in part due to reduced numbers of MuSCs, but also due to impaired MuSC functionality. Although individual ECM proteins have already been shown to contribute to functional impairment of MuSCs, a comprehensive characterization of the effects of aging on the MuSC niche and how these changes relate to intrinsic changes in aging MuSCs was lacking so far.

The groups of Dr. Alessandro Ori (expert in proteomics) and Dr. Julia von Maltzahn (expert in muscle stem cells) at the Leibniz Institute on Aging - Fritz Lipmann Institute (FLI) in Jena, Germany, in cooperation with partners from the University of Coimbra in Portugal and the Wellcome Trust Sanger Institute in the UK, have now used comprehensive proteomic analyses to investigate how aging alters the communication between MuSCs and their niche in a study published in Cell Reports.

Aging alters the proteome of MuSCs

"We have developed methods that allow us to measure thousands of proteins in both, skeletal muscles as well as freshly isolated MuSCs," reports Dr. Svenja Schüler, who led the study as part of her PhD thesis in the Ori lab. "By comparing the proteome of MuSCs and the composition of skeletal muscle ECM in three different age groups, from young to geriatric mice, we were able to reveal hundreds of proteins that are affected by aging either in muscle stem cells or their surrounding environment”.

"The comparison of pools of MuSCs from each age group revealed a distinct aging signature, indicating that the functionality of MuSCs is already impaired in old mice and further deteriorates in geriatric mice," explains Dr. Alessandro Ori, research group leader at FLI. "In the next step, we focused on the proteins that were significantly affected in both old and geriatric MuSCs and found evidence that they play an important role in metabolic processes and protein homeostasis, as well as influence the communication with the stem cell niche."

The analysis of the skeletal muscle proteome revealed close to two hundred extracellular or secreted proteins affected by aging. Importantly, the composition of the ECM appears to be already altered in old animals, indicating that these alterations occur early in the aging process. To investigate which cell types contribute most to the MuSC niche remodeling during aging, single-cell RNA sequencing data from adult skeletal muscle were combined with the proteomic data. "We were able to assign the majority of ECM proteins that are altered in aging skeletal muscle to at least one distinct cell type," reports Dr. Julia von Maltzahn, research group leader at FLI. "Taken together, we identified an aging signature of the ECM that is conserved between different skeletal muscles supporting the notion that the MuSC niche is progressively remodeled with increasing age in different muscles of the body."

Regeneration of skeletal muscle is accompanied by the dynamic remodeling of the MuSC niche to promote each step of the regeneration process in a specific manner. For further analysis, the researchers focused on a secreted protein called Smoc2. They selected this protein because it was among the most prominently affected proteins in skeletal muscle during aging and its level increases progressively with age as well as during regeneration. To determine when and how Smoc2 affects the regeneration process, the dynamics of Smoc2 expression during regeneration of young skeletal muscle were examined. "We identified Smoc2 as a modulator of the signaling axis between MuSCs and their niche and found that it contributes to impaired signaling in MuSCs during aging," Dr. Schüler reports. Abnormally high Smoc2 levels, as observed in old muscles, were sufficient to impair MuSC functionality in young mice after repeated injury of skeletal muscle.

“Our study reveals the complexity of signaling re-wiring in aged skeletal muscle, which is mediated by changes in the abundance of several components of the MuSC niche as well as changes in cell surface receptors of MuSCs. Future efforts aimed at developing therapeutic interventions will have to take this complexity into account,” explains Dr. von Maltzahn.

In the future, the proteomic workflows presented in this study will enable the combined analysis of the proteome and transcriptome of MuSCs, providing a deeper understanding of functional changes during aging. By highlighting major signaling pathways affected by aging and identifying which cell types contribute the most to the remodeling of the stem cell niche, this work provides a new perspective on the complex processes that lead to the decline of skeletal muscle regenerative capacity during aging, and suggests new entry points for potentially counteracting this impairment.

<
Proteomic analyses shed new light on the alterations that occur in muscle stem cells and their surro ...

Proteomic analyses shed new light on the alterations that occur in muscle stem cells and their surrounding environment during aging and identify Smoc2 as one of the factors contributing to impaired muscle regeneration at old age. 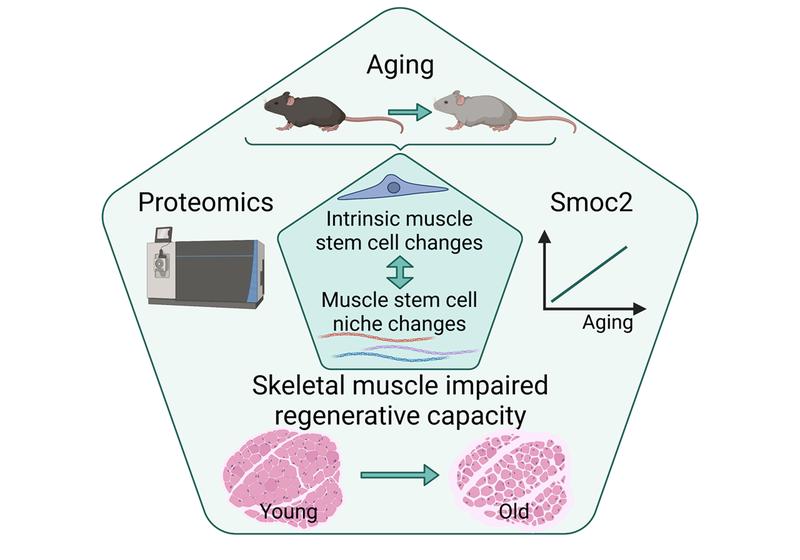