On June 7, the European Physical Society (EPS) awarded the honorary title of "EPS Historic Site" to an entire city for the first time.

Bad Honnef/Jena, Germany, June 10, 2021 – "Since modern times, Jena has had an extraordinarily high density of historic buildings that are of vital importance for physics and astronomy," says Lutz Schröter, President of the German Physical Society (DPG): "That is why we have been keen to designate the entire city as a historic site." This act is itself historic in the truest sense of the word, because until now the EPS has only honoured individual research facilities, laboratories or scientific institutes; in Germany, for example, the Physikalisch-Technische Bundesanstalt (PTB) in Berlin, the Ludwig Maximilian University in Munich, the former Institute of Physics in Würzburg, the former laboratories of the Heidelberg scientists Gustav Robert Kirchhoff (1824 to 1887) and Robert Wilhelm Bunsen (1811 to 1899), the former Institute of Physics at the University of Frankfurt, and the RWTH Aachen.

"Since the early modern period, physics and astronomy in Jena have played an important part in the formation and consolidation of scientific modernity. Particularly noteworthy are the city´s contributions to optics, gravitational theory, and solid-state physics, which were developed in close cooperation with scientific instrument makers and other scientific disciplines," reads the text on the honorary plaque that was unveiled at the entrance to the main physics building at Max-Wien-Platz 1 on Monday, June 7, 2021.

A "physics travel guide" helps track down the historic sites

"The award for Jena recognizes the very special local culture of innovation," says Christian Forstner, who heads the DPG Division History of Physics. "Starting with the `Kaiserreich´, this has outlasted all systems and is still decisive for the successes of the science location today."

Forstner, who currently teaches as a Heisenberg Fellow at the University of Jena, initiated the city's application. To help visitors to Jena learn about the history of physics at the site, a "Physics Travel Guide" was published to coincide with the award ceremony, bringing together a selection of the historic sites. In addition to the central commemorative plaque, the relevant buildings were provided with a QR code so that visitors can obtain information directly on site.

The entire spectrum of physics in Jena

The series of historic sites begins with the Collegium Jenense, the university's founding site, and continues all the way through the observatory in the `Schillergasse´. The focus is, of course, on optics with, among others, the `Hellfeldsches´ House in the `Neugasse´, where Ernst Abbe founded his microscope theory, as well as buildings of Jena physics on `Helmholtzweg´ and `Fröbelstieg´. Furthermore, solid state physics has a long tradition in Jena as well as theoretical physics, for example with its contributions to gravitational physics.

The German Physical Society (Deutsche Physikalische Gesellschaft e. V.; DPG), which was founded way back in 1845, is the oldest national and, with about 55,000 members, also the largest physical society in the world. As a non-profit-making organisation it pursues no economic interests. The DPG promotes the transfer of knowledge within the scientific community through conferences, events and publications, and aims to open a window to physics for the curious. Its special focuses are on encouraging junior scientists and promoting equal opportunities. The DPG’s head office is at Bad Honnef am Rhein. Its representative office in the capital is the Magnus-Haus Berlin. Website: https://www.dpg-physik.de

<
Jena is an important part of the world of physics - not only historically.
Jürgen Scheere
© FSU Jena, Jürgen Scheere

Jena is an important part of the world of physics - not only historically. 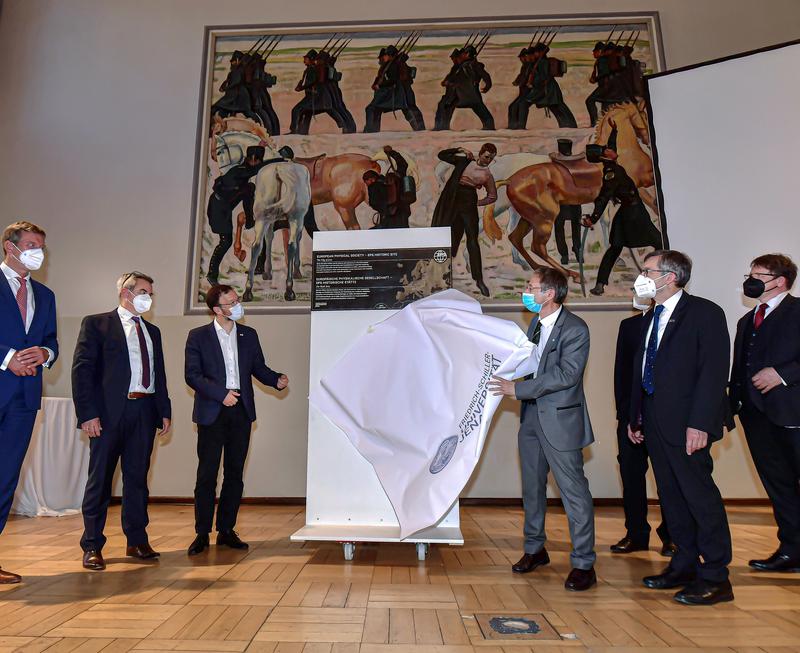