The way in which a compound inspired by nature produces hydrogen has now been described in detail for the first time by an international research team from the University of Jena, Germany and the University of Milan-Bicocca, Italy. These findings are the foundation for the energy-efficient production of hydrogen as a sustainable energy source.

There are naturally occurring microorganisms that produce hydrogen, using special enzymes called hydrogenases. “What is special about hydrogenases is that they generate hydrogen catalytically. Unlike electrolysis, which is usually carried out industrially using an expensive platinum catalyst, the microorganisms use organometallic iron compounds,” explains Prof. Wolfgang Weigand from the Institute of Inorganic and Analytical Chemistry at the University of Jena in Germany. “As an energy source, hydrogen is naturally of great interest. That’s why we want to understand exactly how this catalytic process takes place,” he adds.

In the past, numerous compounds have already been produced worldwide that are chemically modelled on the naturally occurring hydrogenases. In cooperation with the university of Milan, Weigand and his team in Jena have now produced a compound that has yielded entirely new insights into the catalysis process.

“As in nature, our model is based on a molecule that contains two iron atoms. Compared with the natural form, however, we changed the chemical environment of the iron in a specific way. To be precise, an amine was replaced by a phosphine oxide with similar chemical properties. We therefore brought the element phosphorus into play.”

This enabled Weigand and his team to better understand the process of hydrogen formation. Water is composed of positively charged protons and negatively charged hydroxide ions.

“Our goal was to understand how these protons form hydrogen. However, the proton donor in our experiments was not water, but an acid,” Weigand says. “We observed that the proton of the acid is transferred to the phosphine oxide of our compound followed by a proton release to one of the iron atoms. A similar process would also be found in the natural variant of the molecule,” he adds. In order to balance the proton’s positive charge and ultimately produce hydrogen, negatively charged electrons were introduced in the form of electric current. With the help of cyclic voltammetry and simulation software developed at the University of Jena, the individual steps in which these protons were finally reduced to free hydrogen were examined.

“During the experiment, we could actually see how the hydrogen gas rose from the solution in small bubbles,” notes Weigand. “The experimental measurement data from the cyclic voltammetry and the simulation results were then used by the research team in Milan for quantum chemical calculations,” adds Weigand. “This enabled us to propose a plausible mechanism for how the entire reaction proceeds chemically to produce the hydrogen – and this for each individual step of the reaction. This has never been done before with this level of accuracy.” The group published the results and the proposed reaction pathway in the renowned journal “ACS Catalysis”.

The goal: hydrogen through solar energy

Building on these findings, Weigand and his team now want to develop new compounds that can not only produce hydrogen in an energy-efficient way, but also use sustainable energy sources to do so.

“The goal of the Transregio Collaborative Research Centre 234 ‘CataLight’, of which this research is a part, is the production of hydrogen by splitting water with the use of sunlight,” Weigand explains. “With the knowledge gained from our research, we are now working on designing and investigating new catalysts based on the hydrogenases, which are ultimately activated using light energy.”

<
Dr. Laith Almazahreh is investigating the mechanism of electrocatalytic hydrogen formation with a na ...
Image: Jens Meyer
University of Jena

Dr. Laith Almazahreh is investigating the mechanism of electrocatalytic hydrogen formation with a nature-inspired model compound at the Friedrich Schiller University Jena. 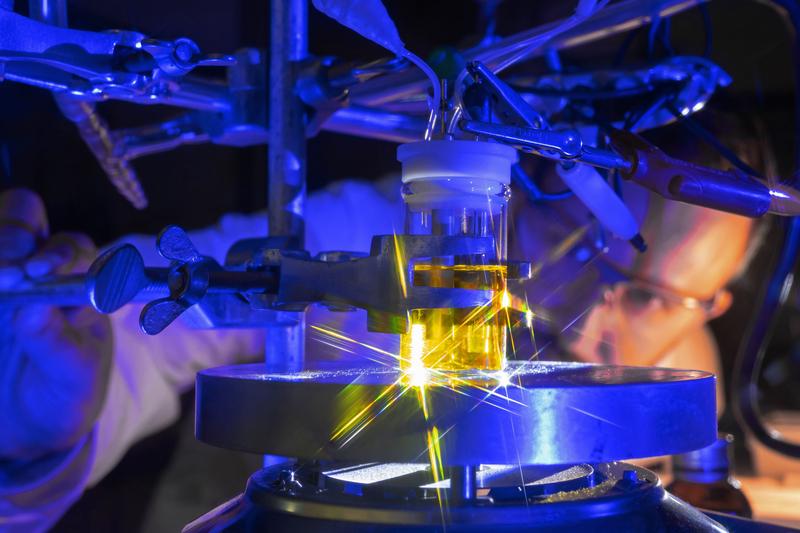