How do Muslims navigate and shape an increasingly interconnected world of conflicting norms and perspectives? The recently published ZMO-Studie “Claiming and Making Muslim Worlds. Religion and Society in the Context of the Global” (volume 40, De Gruyter 2021) investigates how the circulation of ideas about ‘Muslimness’ contributed to the shaping of specific ideas about what constitutes Islam and its role in society and politics. What does this mean for ordinary men and women trying to make a decent living, what for politicians acting in complicated national and international constellations? The book invites readers to engage with the perspectives of actors from Sri Lanka to West Africa.

Among the many facets of the intense phase of global integration in the 19th century was the intensification of scholarly and trade networks that prompted the circulation of new literary genres or shaped stereotypical images of Muslims. This, in turn, had consequences in widely differing fields such as self-representation and governance of Muslims. The contributions in “Claiming and Making Muslim Worlds” explore this issue in geographical contexts ranging from South Asia to Europe and the US. Coming from the disciplines of history, anthropology, religious studies, literary studies and political science, the authors collectively demonstrate the need to combine a translocal perspective with very specific local and historical constellations.

A contribution by Judith Scheele for example deals with the Islamic rhetoric put forward by various actors in northern Mali. In a society marked by different ethnic and tribal affiliations, colonial borders and unaccountable rulers, Islam has become an idiom to express political and economic aspirations, at times in very violent ways. Very contradictory understandings of Islam characterize also the debates about what it means to be queer, Arab and Muslim, analysed by Claude C. Kempen on the basis of articles that appeared in the Jordanian LGBTQIA+ online magazine “My.Kali”. Migration, development cooperation, and faith solidarity between the Gulf and Pakistan are topics that are investigated by Antía Mato Bouzas. “The understanding of the religious in transnational spaces cannot be divorced from existing power hierarchies in which religion is inscribed”, she writes. Further chapters of the volume discuss topics such as Muslim migrants in fascist Europe during the Second World War, Islamised memories in Moroccan testimonial prison literature or the anti-Muslim movement in post-war Sri Lanka.

“Claiming and Making Muslim Worlds. Religion and Society in the Context of the Global” is edited by Jeanine Elif Dağyeli, Claudia Ghrawi and Ulrike Freitag. It is published in Leibniz-Zentrum Moderner Orient’s own series ZMO-Studien by De Gruyter. The publication was supported by the Leibniz Open Access Monograph Publishing Fund. The volume was preceded by a 12-year research programme at ZMO entitled “Muslim Worlds – World of Islam?” (2008-2019). 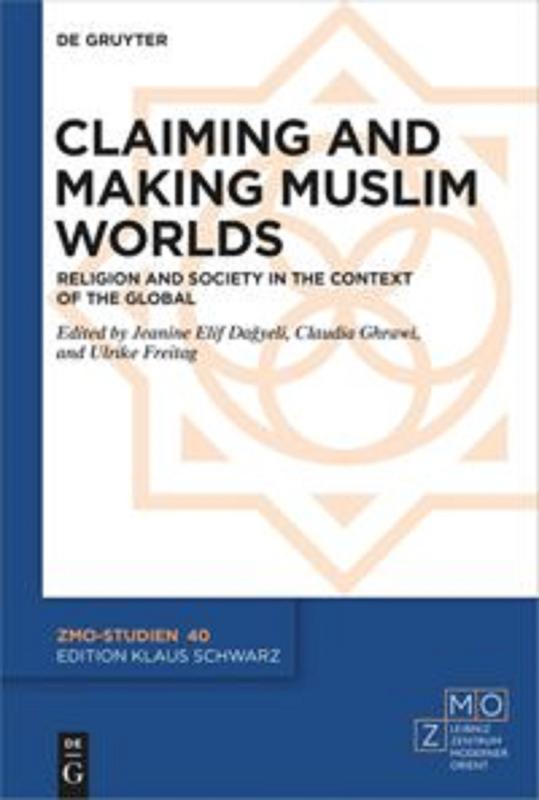