A beam of light can only be seen when it hits matter particles and is scattered or reflected by them. In a vacuum, however, it is invisible. Physicists at the University of Bonn have now developed a method that allows laser beams to be visualized even under these conditions.

A beam of light can only be seen when it hits matter particles and is scattered or reflected by them. In a vacuum, however, it is invisible. Physicists at the University of Bonn have now developed a method that allows laser beams to be visualized even under these conditions. The method makes it easier to perform the ultra-precise laser alignment required to manipulate individual atoms. The researchers have now presented their method in the journal Physical Review Applied.

When individual atoms interact with each other, they often exhibit unusual behavior due to their quantum behavior. These effects can, for instance, be used to construct so-called quantum computers, which can solve certain problems that conventional computers struggle with. For such experiments, however, it is necessary to maneuver individual atoms into exactly the right position. "We do this using laser beams that serve as conveyor belts of light, so to speak," explains Dr. Andrea Alberti, who led the study at the Institute of Applied Physics at the University of Bonn.

Such a conveyor belt of light contains countless pockets, each of which can hold a single atom. These pockets can be moved back and forth at will, allowing an atom to be transported to a specific location in space. If you want to move the atoms in different directions, you usually need many of these conveyor belts. When more atoms are transported to the same location, they can interact with each other. In order for this process to take place under controlled conditions, all pockets of the conveyor belt must have the same shape and depth. "To ensure this homogeneity, the lasers must overlap with micrometer precision," explains Gautam Ramola, the study's lead author.

A bean in a soccer stadium

This task is less trivial than it sounds. For one thing, it requires great accuracy. "It's kind of like having to aim a laser pointer from the stands of a soccer stadium to hit a bean that's on the kickoff spot," Alberti clarifies. "But that's not all — you actually have to do it blindfolded." This is because quantum experiments take place in an almost perfect vacuum, where the laser beams are invisible.

The researchers in Bonn therefore used the atoms themselves to measure the propagation of laser beams. "To do this, we first changed the laser light in a characteristic way — we also call it elliptical polarization," Alberti explains. When the atoms are illuminated by a laser beam prepared in this way, they react changing their state in a characteristic way. These changes can be measured with a very high precision. "Each atom acts like a small sensor that records the intensity of the beam," Alberti explains. "By examining thousands of atoms at different locations, we can determine the location of the beam to within a few thousandths of a millimeter."

In this way, the researchers succeeded, for example, in adjusting four laser beams so that they intersected at exactly the desired position. "Such an adjustment would normally take several weeks, and you would still have no guarantee that the optimum had been reached," Alberti says. "With our process, we only needed about one day to do this."

Funding:
The study was funded by the German Research Foundation (DFG).

<
Illustration of the experimental apparatus, with in the center the vacuum cell and the objective len ...
Stefan Brakhane
© Stefan Brakhane / University of Bonn

Illustration of the experimental apparatus, with in the center the vacuum cell and the objective lens embedded within. Two of the four laser beams are drawn (not to scale). Inset: fluorescence image of two atoms. 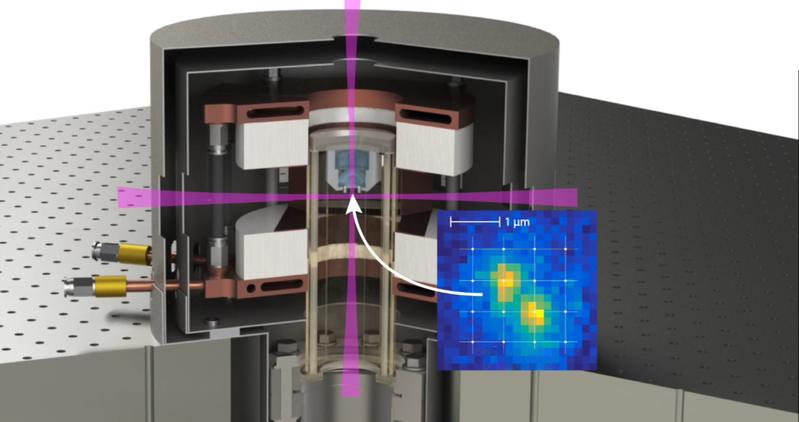 Study leader Dr. Andrea Alberti from the Institute of Applied Physics at the University of Bonn 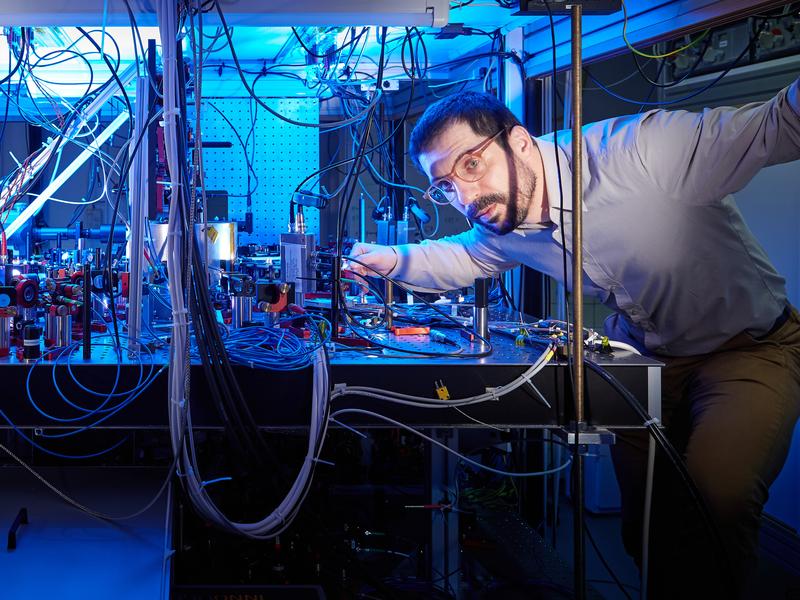