Neanderthals living in the Swabian Jura more than 45,000 years ago used sophisticated techniques with many different production strategies to make stone tools. The Heidenschmiede site has yielded many stone tools and by-products of the toolmaking process. The researchers refitted the pieces made from stone cores and were thereby able to show the techniques - requiring planning and forethought - used in the process. The results of their work were published in the journal PLOS ONE by Dr. Berrin Çep, Benjamin Schürch and Dr. Jens Axel Frick from the Institute of Prehistory and Medieval Archaeology and Dr. Susanne Münzel from the Institute of Scientific Archaeology, all from the University of Tübingen. The findings underline once more that Neanderthals possessed highly developed abilities.

The Heidenschmiede, a rock shelter near Heidenheim in southern Germany, was discovered and excavated in 1928 by amateur archaeologist Hermann Mohn, who recognized it as an important site for stone and bone worked by early humans. “Since the appearance of a first publication on the finds in 1931, little has happened with this research. Our study is the first detailed investigation since then that deals with the many finds and classifies them in more detail,” says Benjamin Schürch. The bone and stone tools date from the Middle Paleolithic, and are at least 50,000 to 42,000 years old, he says, “In this period, modern humans of our current species Homo sapiens were yet to come to the region. It was late Neanderthals living at the Heidenschmiede.”

Pieces re-assembled into a core

Neanderthals used stone to produce blades, scrapers, and single-edged hand axes, so-called Keilmesser, for tasks such as leatherworking; as well as spearheads used for hunting. “It was known that they used various strategies to make such tools,” says Berrin Çep, lead author of the new study. She has been seeking to refit individual pieces in order to better understand how the people in the Heidenschmiede worked. “In some cases, we have been able to trace in detail how other basic shapes, such as flakes and blades, were first made from stone cores and how these were further processed into tools,” Çep says, “Reconstructions like this are rarely possible at Neanderthal cave sites in the Swabian Jura, because usually not all the material from the manufacturing process remains at the site. Also, in early excavations, often not all finds were recorded.”

Early research in the region

“Based on the reconstructions, we were able to prove that the Neanderthals at the Heidenschmiede used a branched manufacturing system in which various techniques known to the makers were applied to one core piece of stone,” Schürch explains, adding that such sophisticated manufacturing processes have only rarely been attested from the Middle Paleolithic. “This is the first such evidence from the Swabian Jura,” says Jens Axel Frick. Whoever worked the raw material was able to consider from the outset that parts of the stone could be further worked using a different technique. “This requires strong three-dimensional visualization, creativity and mentally flexible planning,” says Berrin Çep.

The research team has shown that the early humans who worked the stones from the Heidenschmiede had an excellent working memory overall. The new study results supported other investigations, according to which the Neanderthals possessed great mental flexibility and adaptability, coupled with manual dexterity. At the same time, the varied and elaborate manufacturing processes made visible also provide an explanation as to why a great variability of the assemblages are found in stone artefacts from the Middle Paleolithic. 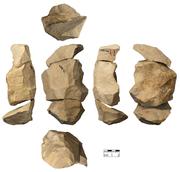 <
Middle Paleolithic stone core from the Heidenschmiede. By re-assembling these stone artefacts, the r ...
Jens A. Frick
Jens A. Frick

Enlarged section of a map of Germany, showing Middle Paleolithic sites in the Swabian Jura. The Heidenschmiede is located in Heidenheim an der Brenz on the eastern Swabian Jura (top right, marked in red). 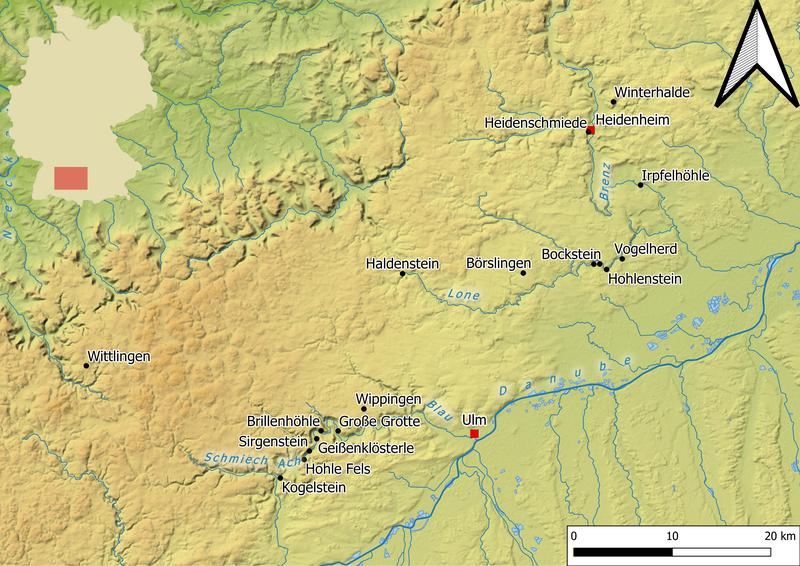 Middle Paleolithic stone core from the Heidenschmiede. By re-assembling these stone artefacts, the research team revealed the many different techniques used in stone tool manufacturing. 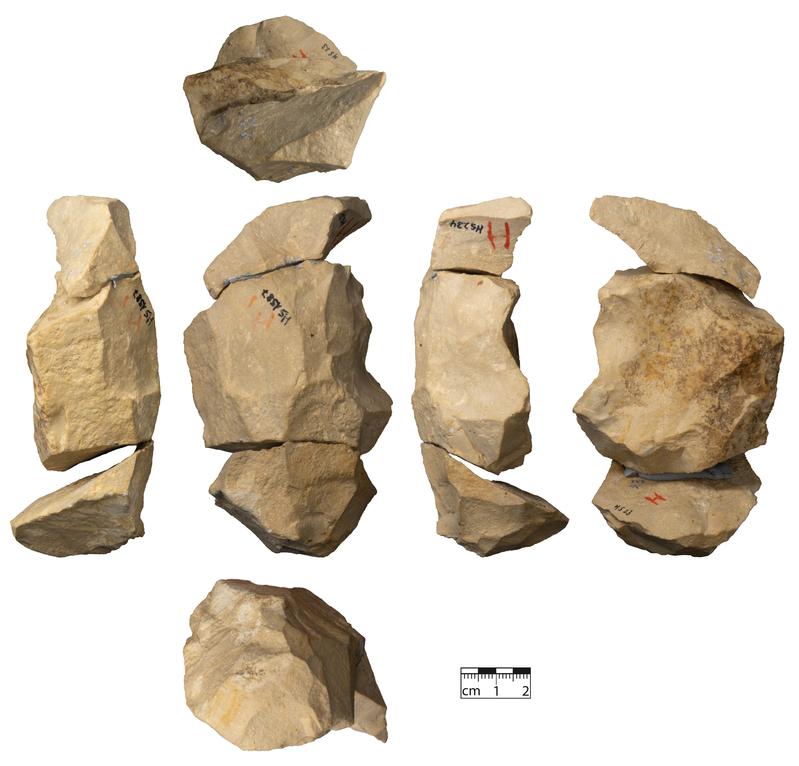