A study by the University of Bonn and the Leibniz Institute of Plant Genetics and Crop Plant Research in Gatersleben sheds light on the mechanism used by plants to monitor how much of the nutrient phosphate is available. The enzyme ITPK1 plays a key role in this process. A particular group of signaling molecules involved in phosphate sensing respond very sensitively to phosphate and this regulation takes place not only in plants but also in human cells. In the long term, the results could lead to the breeding of new crop varieties that require less phosphate fertilizer. The final version of the study has now been published in "Molecular Plant".

Phosphate is an essential mineral element for all living organisms. At the same time, phosphate resources on Earth suitable for fertilizer production are limited and non-renewable – estimations indicate that phosphate deposits may be depleted in the next 300 years. Another issue that may come to someone’s mind when talking about phosphate is that phosphate used in agriculture can contaminate aquatic ecosystems such as rivers, lakes and oceans. The reason: increased levels of nutrients like phosphate in waters, known as eutrophication, can result in excessive algal growth and eventually result in the depletion of oxygen in these ecosystems.

Therefore, reducing phosphate inputs in agriculture (without negatively impacting yields) would have two advantages: phosphate reserves could last longer and less phosphate would end up in lakes and oceans. To achieve this, researchers are working on strategies to make crops more phosphate-efficient. This means, plants that can more efficiently mobilize, take up, and, if necessary, recycle phosphate.

The exact mechanisms used by plants and other organisms to recognize if they have sufficient phosphate to run their cellular processes or if more of this nutrient must be taken up from the soil are largely unknown. In recent years, scientists have discovered that plants do not perceive phosphate directly, but rather indirectly through the signaling molecule InsP8, a type of inositol pyrophosphate. So-called SPX proteins help with this. “What these results are indicating is that inositol pyrophosphates like InsP8 serve as a proxy for the overall plant phosphate status”, says Dr. Ricardo Giehl, a DFG-funded Principal Investigator from the Leibniz Institute of Plant Genetics and Crop Plant Research (IPK).

However, it was previously unclear how plants produce InsP8 and its precursor InsP7. To solve this puzzle, the research team at the University of Bonn has recently used a genetic trick: the scientists used baker's yeast to express relevant plant kinases, i.e. enzymes that are able to transfer a phosphate residue from ATP, the “energy currency” of the cell, to other substrates. With this approach, they identified ITPK1 as a putative InsP6 kinase for setting the important signaling molecules in motion.

In the new study, the scientists show that the enzyme ITPK1 functions indeed as a functional InsP6 kinase in planta and generates 5-InsP7, the direct precursor of InsP8. The researchers were also able to show that the synthesis of inositol pyrophosphates reacts very sensitively to phosphate and that this regulation takes place not only in plants (including mosses) but also in human cells.

"Because inositol pyrophosphates are very unstable, we were only able to detect them in plants after developing a new method in our laboratory a few years ago”, explains Esther Riemer from the Institute for Crop Science and Resource Conservation (INRES) at the University of Bonn and first author of the study. "Depending on the cellular energy status and thus indirectly also on how much phosphate is available, ITPK1 can either initiate the synthesis of InsP8, which inhibits phosphate acquisition, or function as an ATP synthase, which ultimately switches off the InsP8 signal thus activating phosphate mobilization and uptake”, says Dr. Ricardo Giehl.

With the help of a new mass spectrometric method developed by the research team led by Prof. Dr. Henning Jessen from the Institute for Organic Chemistry at the University of Freiburg, the scientists also identified new forms of plant inositol pyrophosphates. “These include the isomer 4/6-InsP7. Even though we still don’t know what it does in plants, this type of inositol pyrophosphate seems not engaged in the regulation of phosphate deficiency responses,” says Esther Riemer.

On the way to sustainable crop production

"The results of this and previous studies have far-reaching consequences for our understanding of how organisms sense phosphate deficiency and how physiological responses are generated depending on the energy status," says Prof. Dr. Gabriel Schaaf from INRES at the University of Bonn. "Our work provides new breeding targets and opens avenues on how new breeding methods, such as genome editing, might be used to increase phosphate use efficiency and thereby contribute to a more environmentally friendly and resource-saving crop production."

Gabriel Schaaf is a member of the Excellence Cluster "PhenoRob - Robotics and Phenotyping for Sustainable Crop Production" and the transdisciplinary research area "Innovation and Technology for a Sustainable Future "at the University of Bonn.

<
Arabidopsis thaliana, a plant in which the researchers detected the new mechanism.

Arabidopsis thaliana, a plant in which the researchers detected the new mechanism. 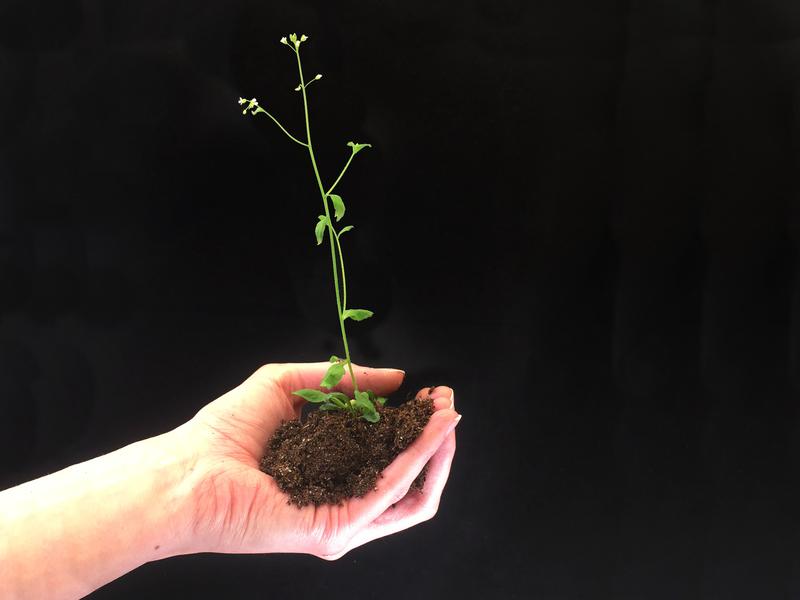