Poxviruses have found a unique way of translating their genes into proteins in the infected organism. For the first time, scientists of the University of Würzburg's Biocenter have been able to gain atomic-level insights into the functioning of the molecular machinery involved in the process. The pictures taken enable them to represent the early phase of transcription in a movie-like manner.

The last case of smallpox worldwide occurred in Somalia in October 1977. In 1980, the World Health Organization (WHO) declared the eradication of the smallpox. According to official sources, the virus continues to exist today only in two high-security laboratories in Russia and the USA, where it is used for research purposes.

But although this means that poxviruses are no longer an immediate threat to humans, this virus family is still of great interest to scientists. On the one hand, modified strains are used in the treatment of cancer, and on the other hand, they possess highly intriguing multiplication properties.

While many viruses draw largely on the biochemical resources of the host cell for their multiplication, poxviruses encode their own molecular machinery in their genome for that purpose. The important components of this machinery are two enzymes: DNA polymerase to multiply the viral genes, and RNA polymerase to transcribe the viral genes into mRNA. The RNA polymerase of the vaccinia poxvirus strain, for example, is a large complex comprising 15 different protein subunits with different biochemical functions.

A team of researchers from the Biocenter of the Julius-Maximilian's University of Würzburg (JMU) has now for the first time been able to watch the polymerase of vaccinia viruses doing their work at an atomic level. Before that, the team had already reported on three-dimensional structure of the RNA polymerase at atomic resolution. The group in charge of the work is led by Utz Fischer, who holds the JMU’s Chair of the Department of Biochemistry I. The results of their work have now been presented in a publication in the journal Nature Structure and Molecular Biology.

Three-dimensional structures on an atomic scale

“We have mixed isolated RNA polymerase with a piece of DNA containing the promoter, i.e. the start signal for the transcription of viral genes. The enzyme recognized precisely this DNA element and started producing mRNA”, explains Julia Bartuli, in charge of the biochemical work of the study. In a next step, the samples were examined in the cryo-electron microscope, in cooperation with Bettina Böttcher from the Department of Biochemistry II. On the basis of the data collected, the scientists were able to reconstruct the three-dimensional structure of the sample down to the atomic scale, using modern computerized methods.

They were enthusiastic about the final result of this lengthy process: “One single sample we examined in the microscope allowed us to reconstruct a total of six different polymerase complexes, which we could finally allocate to individual phases of the transcription process,” says Clemens Grimm, in charge of structural analysis in Fischer’s department. “We can string the individual pictures together as in a movie and thus represent the early transcription phase with time resolution.”

Smallpox continue to be a threat to humans

But why bother to do research on poxviruses if the virus that is so dangerous to humans is eradicated already? There are good reasons for this, replies Professor Fischer: “There is still no reliable cure for a smallpox infection, it can only be prevented by a vaccination. If the still existing virus samples were to be spread again, for example by a terrorist attack, they would hit a population that has no immunization.”

Another threat, which may be more real, are zoonotic diseases caused by animal-specific viruses jumping to humans, explains biochemist Utz Fischer. For example, there are sporadic infections of humans by monkeypox, which can make the infected persons severely ill. “If such a zoonotic disease picks up speed, by further adaption to its human host and human-to-human transmission, a dangerous epidemic could emerge”, he says.

Inhibitors of viral gene expression would therefore be highly relevant as antiviral drugs. Understanding the atomic structures of RNA polymerase in its different states allows researchers now a rational, structure-based computer approach to the development of such inhibitors. Such studies, which are fundamentally different in method from the classic experimental procedure, are already well underway.

People born before 1976 – in Germany at any rate – bear on their upper arm a visible scar from their smallpox vaccination. Up to that date vaccination was mandatory in Germany. This vaccination is among the most prominent successes of modern infection protection. It resulted in the eradication of the deadly smallpox pathogen. This pathogen, scientifically known as variola virus, had been the cause of smallpox epidemics that scourged mankind periodically until well into the 20th century, and took the lives of millions of people.

Early forms of an inoculation of sorts have been known since antiquity, when people introduced the scab of a healed smallpox blister into a small wound, hoping to thus prevent a severe illness. This procedure called “variolation” was performed in the 18th century in Europe, among other places at the Juliusspital in Würzburg. The breakthrough in the fight against smallpox was achieved in 1976 by the British physician Edward Jenner, who substituted the harmless horsepox or cowpox pathogen for the much more dangerous smallpox virus.

The strain used by Jenner has gone down in medical history with the name vaccinia. It has lent its name to today’s common immunization practices known as vaccinations. A global vaccination campaign using the vaccinia strain ultimately led to the WHO’s declaration about the eradication of smallpox in 1980 – for the first time in the history of mankind an infectious disease had been defeated world-wide.

Video "Animation of the rearrangement of the complete vRNAP”
Video "Transcription". Processes around the transcription start at the promoter and promoter escape can be seen. 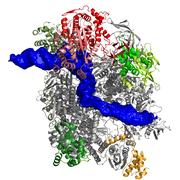 <
Structure of the poxvirus-polymerase in an early stage of transcription. Bound DNA is labelled in bl ...

Structure of the poxvirus-polymerase in an early stage of transcription. Bound DNA is labelled in blue. 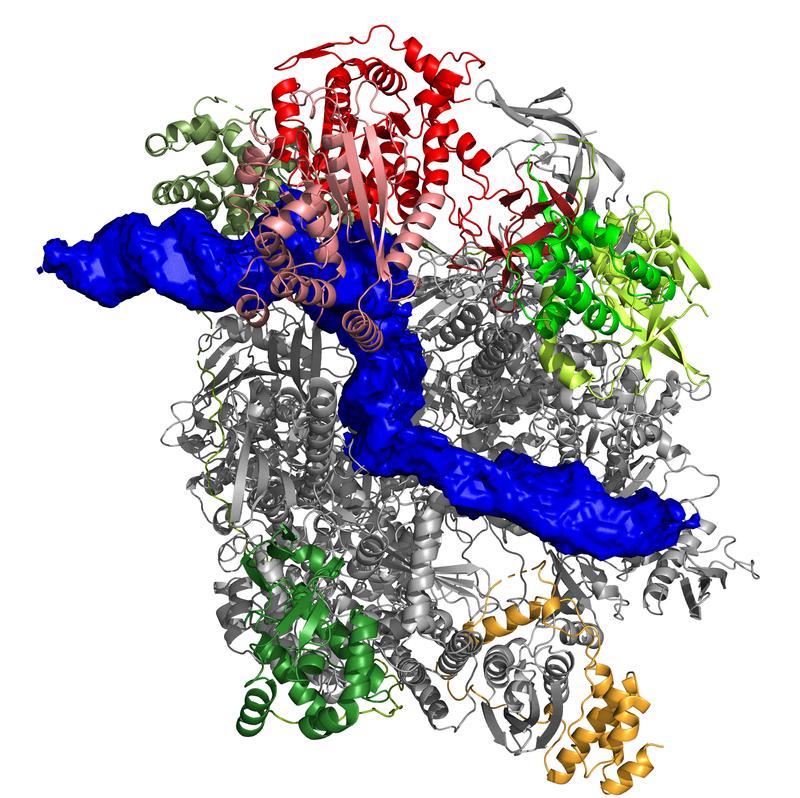