Beer and blue cheese already on the menu 2,700 years ago

A team of researchers led by Eurac Research and the Natural History Museum Vienna gains unique insights into the history of cheese production and complex dietary habits of prehistoric Europeans by studying human paleofeces from the Hallstatt salt mine.

We perceive highly processed fermented foods such as beer or cheese primarily as a hallmark of modern times. However historical texts do confirm that milk was fermented in ancient Egypt and, the world's oldest evidence for the actual consumption of blue cheese has now been revealed by a team of researchers. The evidence in question comes from Hallstatt salt mine in Austria in the form of exceptionally well-preserved fecal remains from the Bronze Age to the Baroque period which demonstrate the presence of two fungal species used in the production of blue cheese and beer. The combination of archaeological and molecular analysis has proven particularly fruitful, providing surprising insights both into prehistoric dietary habits and food production. The study results the results will be published today, October 13, in the renowned journal Current Biology.

The prehistoric salt mine of Hallstatt is the world’s oldest and still active salt mine. What’s more, the mine’s combination of high salt concentration in its mine workings and a constant temperature of 8°C has preserved the millennia-old remains such as textiles, tools and even remnants of food discovered there, exceptionally well. And where there’s food, there’s usually human excrement too - "which makes the archaeological site a unique treasure trove for research," said Kerstin Kowarik, a prehistoric archaeologist at the Natural History Museum Vienna. "The specimens we studied are almost perfectly preserved - they still contain human DNA, specifically DNA from intestinal bacteria, as well as proteins and parts of the food eaten," explains microbiologist Frank Maixner of the Bolzano-based research center Eurac Research.

To their surprise, in a sample from the Iron Age, the research team discovered surprising quantities of two fungal species, Penicillium roqueforti and Saccharomyces cerevisiae, both of which are used for the refinement and fermentation of foods - in this case blue cheese and beer. "What's particularly exciting is that, based on our analyses, we have clear evidence that these specific yeast variants were not just used by chance, but were specifically bred and used for beer production," Maixner says. The consumption of a dish that consisted essentially of cattle blood, possibly a type of Iron Age blood sausage, could also be detected. The research group, led by Eurac Research and the Natural History Museum Vienna, have now provided the molecular evidence that complex processed foods played a greater role in the Iron Age than previously thought. "It is becoming increasingly clear that prehistoric culinary practices were not only highly developed, but that complexly processed foods as well as the technique of fermentation played a prominent role in our early nutritional history," Kerstin Kowarik emphasizes.

From the excrement, the team was not only able to reconstruct the diet of the miners over a period of 3,000 years through microscopic and molecular examinations - revealing highly fibrous diets rich in carbohydrates, supplemented by proteins from beans and occasionally by fruits, nuts or meat-based foods, but were also able to make astonishingly accurate statements about the bacterial community composition within the intestine.

Although the most recent of the paleofeces samples analyzed showed that the Baroque miner would have eaten more processed finely ground forms of cereal than was common in the Bronze or Iron Ages, their microbiome would have actually been more similar to that of Ötzi the Iceman whose 5,300-year-old remains Maixner and colleagues analyzed in an earlier study based on the contents of his intestine, than to that of a person in today's industrial society. "If people 300 years ago still carried a microbiome like their ancestors thousands of years ago, that would mean that major changes occurred here rather recently – over a relatively short period of time," Maixner said.
The decline in diversity and abundance of the microbiome due to the lifestyle of Western industrial societies is now recognized by scientists as a possible factor in connection with numerous diseases, although many aspects are still not understood. As Albert Zink, head of Eurac Research's Institute for Mummy Research, emphasizes, this is one of the reasons why the investigations in Hallstatt are "of very current interest."

The results provide new insights into the dietary habits of our distant past. "Highly processed foods, production and consumption of specialty products, and food refinement through fermentation were part of dietary habits almost 3,000 years ago," summarizes Kerstin Kowarik of the Natural History Museum Vienna. The collaboration between Eurac Research and the Museum as well as the exchange between archaeology and molecular biology have proved especially fruitful for recent findings and will now form the basis for further interdisciplinary projects in the future.

Under the leadership of Eurac Research and the Natural History Museum Vienna, the University of Trento’s Department of Cellular, Computational and Integrative Biology (CIBIO) and the Institute for Systems Biology, Seattle (USA) were also significantly involved in the study. The archaeological research in the Hallstatt salt mine is supported by the cooperation between the Natural History Museum Vienna, Salinen Austria AG and the Salzwelten GmbH.

Current Biology: Hallstatt miners consumed blue cheese and beer during the Iron Age and retained a non-Westernized gut microbiome until the Baroque period

<
Our ancient DNA laboratory at the Eurac Research Institute for Mummy Studies where the molecular wor ...
Ivo Corrà
Eurac Research

<
The four paleofecal samples that were subjected to analysis.
Frank Maixner
Eurac Research

Our ancient DNA laboratory at the Eurac Research Institute for Mummy Studies where the molecular work on the paleofeces samples was undertaken. 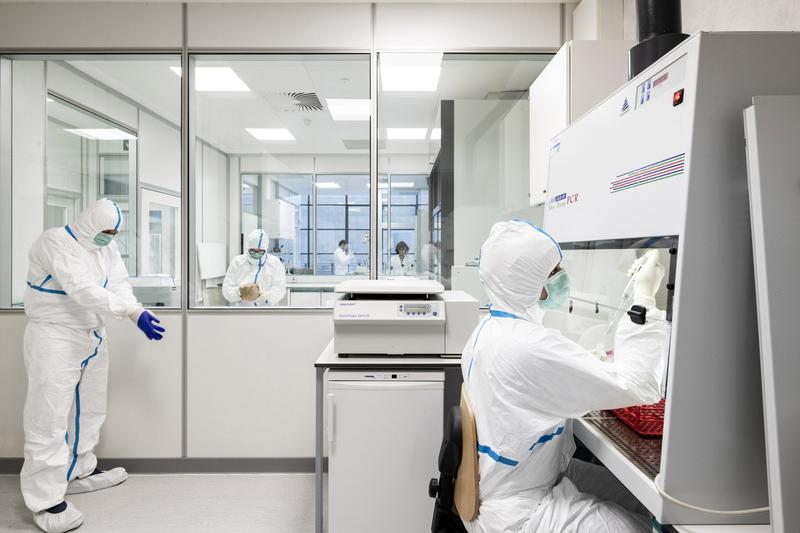 The four paleofecal samples that were subjected to analysis.