The pupil not only regulates the amount of light entering the eye, but also reflects the state of the brain: when we are aroused or focused, the pupils dilate. The pupil even changes as mammals sleep, constricting during deep non-REM sleep and dilating in REM sleep. Now, for the first time, researchers at the Max Planck Institute for Ornithology and the Neurosciences Research Center in Lyon have studied pupil behavior in birds. Surprisingly, the exact opposite happens here: During arousal and REM sleep, the pupils become smaller, while they enlarge during non-REM sleep. The unexpected pupillary behavior of birds provides a new window into the sleeping brain.

The pupil literally plays a central role in vision: it is the opening in the middle of the eye that regulates how much light falls on the retina. If it is dark, the pupil becomes large and lets a lot of light through – if it is bright, it becomes small and prevents us from being blinded. However, it not only regulates the incidence of light, but also reflects emotions and the state of the brain. If we are excited or concentrated, for example, the pupils enlarge – without us being able to influence it.

In birds, pupil sizes have never been systematically studied. Yet, rapid pupil constrictions are a well-known feature of bird body language among parrot owners. A team led by Gianina Ungurean from Niels Rattenborg's research group at the Max Planck Institute for Ornithology in Seewiesen now studied pupil behavior in pigeons. Surprisingly, the pupils of male pigeons became smaller during courtship – in contrast to mammals, in which the pupils dilate during arousal.

Recently, it was shown in mice that pupil size also changes during sleep: In deep non-REM sleep with quiet behavior, pupils constrict; in more active REM sleep, they can slowly dilate. The team therefore next examined the pupil behavior of sleeping birds. The transparent eyelids of pigeons and a special camera system allowed the scientists to record pupil sizes even with the birds’ eyes closed and in the dark. Again, the birds’ pupils did the opposite to mammals: they dilated during non-REM sleep, but during REM sleep, the pupils rapidly constricted over 1,000 times a night, a phenomenon the researchers called rapid iris movements.

The researchers were able to observe the pigeons’ pupil behavior also in a cuckoo species, suggesting that it is a general trait among birds. "These results showed us that basic behaviors such as pupil size can be completely opposite in different animal groups," explains Niels Rattenborg, leader of the study. "Examining why this difference exists might cause us to reconsider our understanding of pupillary behavior, in general."

In birds and mammals, pupil size is regulated by different types of muscles in the iris. Mammals use smooth muscles, which cannot be controlled voluntarily. Birds, on the other hand, regulate the pupil by striated muscles, like those that move our arms or legs, for example. The researchers were able to confirm this structural aspect as a possible cause for the different pupil behavior: If they used a drug to silence receptors that activate striated muscle cells, the pigeons no longer constricted their pupils during sleep.

"Pupil constrictions in sleeping birds probably fulfill important functions," Gianina Ungurean explains. "The constriction could exercise the muscle's fine motor skills. But perhaps it's also a sign that brain regions activated during aroused states, are active again during REM sleep, possibly when memories are replayed." In this regard, pupil constrictions during REM sleep could help to determine when and how the sleeping brain processes memories.

The fact that birds regulate their pupil size by striated muscles, and that these are usually controlled voluntarily, opens up an exciting question: Can birds change the size of their pupils intentionally? Future studies will now investigate this question and the pupils’ role in communication between birds. 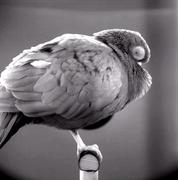 <
The pupils of birds behave in the opposite way to those of mammals. Image shows the constricted pupi ...
Ungurean
MPI for Ornithology

The pupils of birds behave in the opposite way to those of mammals. Image shows the constricted pupil visible through the transparent eyelid of a pigeon in REM sleep. 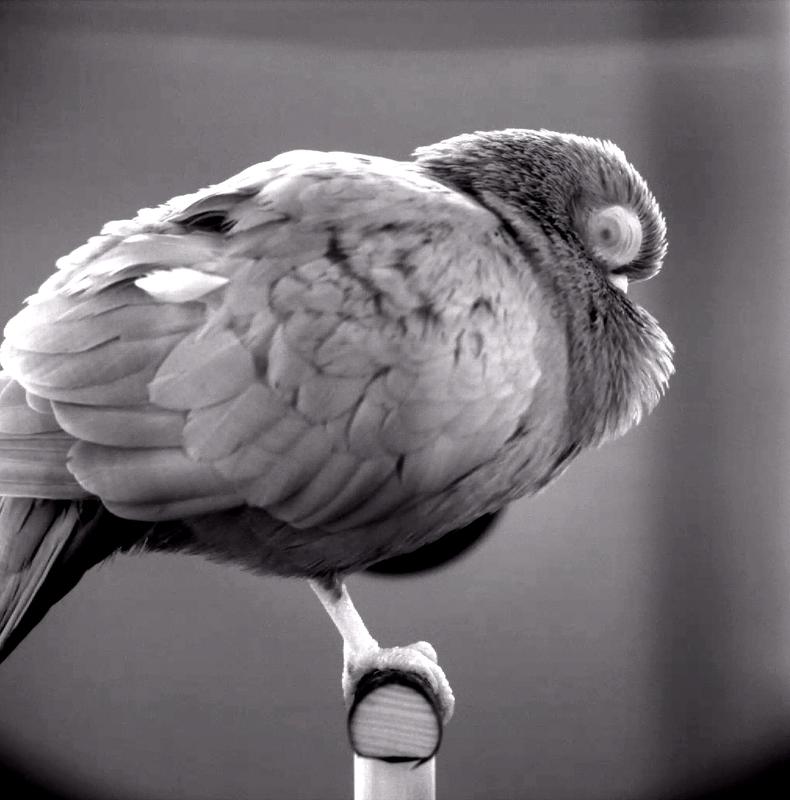