Home > Press release: How quickly does the climate recover?

How quickly does the climate recover?

Research conducted at Mainz University shows that it took the climate 20,000 to 50,000 years to stabilize after the rise in global temperatures of five to eight degrees Celsius 56 million years ago

Climate change is causing temperatures to rise and is also increasing the likelihood of storms, heavy rain, and flooding – the recent flood disaster in the Ahr valley in Germany is just one such example. What we need to ask ourselves in this connection is how quickly the climate can recover from the warming caused by an increase in carbon dioxide in the atmosphere.

Professor Philip Pogge von Strandmann of Johannes Gutenberg University Mainz (JGU), Germany, set out to investigate this aspect by considering the significant rise in global temperatures of five to eight degrees Celsius that took place 56 million years ago – the fastest natural period of global warming that has impacted on our climate, known as the Paleocene-Eocene Thermal Maximum (PETM). It was most likely triggered by a volcanic eruption that released huge amounts of carbon dioxide or CO₂ into the atmosphere. We know that the higher the temperature, the faster rock will weather, and, in addition, if there is a lot of CO₂ in the atmosphere, some of it will react with water, forming carbonic acid – the very acid that promotes and accelerates the weathering process. Because of the weathering process, this atmospheric carbon will eventually find its way into the seas via rivers, where it binds CO₂ as carbonate and form a persistent ocean-based reservoir of carbon dioxide. "Our theory was that if rock weathers faster due to the increased temperatures, it also helps convert a lot of carbon dioxide from the atmosphere into insoluble carbonate in seawater – meaning that, over the long term, CO₂ levels would end up falling again and the climate would ultimately recover," explained Pogge von Strandmann. This effect could have helped to keep the Earth's climate fairly stable over billions of years and it could have even prevented the total extinction of all life on the planet.

In order to test this theory, Professor Philip Pogge von Strandmann and his team decided to analyze the weathering processes that occurred during the warming event 56 million years ago. Their findings indicate that the theory may well be correct. "Rock weathering during that time increased by 50 percent as a result of global warming; erosion – the physical part of weathering – actually tripled. Another consequence of the rise in temperature was that evaporation, rainfall, and storms also increased, which then led to even more erosion. As a result of this increased rock weathering, the climate stabilized, but it took between 20,000 and 50,000 years for this to happen," said Pogge von Strandmann, summarizing the team's findings.

But how did the researchers come to these conclusions? After all, these weathering processes took place 56 million years ago. The answer lies in the rocks themselves. When rocks dissolve, they release lithium – the isotopes lithium-6 and lithium-7 to be precise – which escapes into any surrounding water. The proportion of the isotopes lithium-6 and lithium-7 present in water is determined by the type of weathering, in other words, the amount of erosion produced by weathering. Clay, which is found at the bottom of the sea, mainly stores lithium-6, while lithium-7 remains in the water. The research team conducted two types of scientific investigation: They examined marine carbonates that were formed 56 million years ago – a type of rock that absorbs chemical components from water. They also investigated clay minerals from Denmark and Svalbard, which also formed during this period, looking at the relative proportions of lithium isotopes in these two different kinds of minerals. The researchers were able to use the data obtained to draw conclusions about weathering and climate 56 million years ago. Their results have been published in the journal Science Advances.

The Paleocene-Eocene Thermal Maximum is also used as an analog to draw conclusions about current and future global warming rates. The authors point out that in the future both weathering and erosion, including soil erosion, as well as storms are likely to increase – the recent floods in Germany are symptomatic of this.

<
The analyzed sediments from the Paleocene-Eocene Thermal Maximum (PETM) came from the Danish island ...

The analyzed sediments from the Paleocene-Eocene Thermal Maximum (PETM) came from the Danish island of Fur. 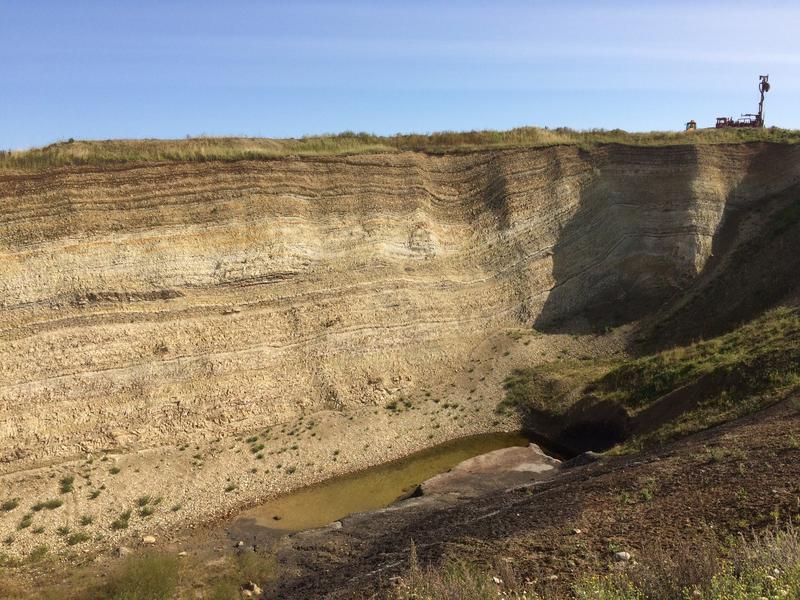