Einstein Foundation to present the inaugural €500,000 Award for Promoting Quality in Research

The Einstein Foundation Berlin is honoring the American physicist Paul Ginsparg and the Center for Open Science with the inaugural Einstein Foundation Award for Promoting Quality in Research. Paul Ginsparg is the founder of the preprint server arXiv.org, the first platform to exchange scientific discoveries among scientists immediately, openly and globally without review- and paywall restrictions.

In developing arXiv.org, Ginsparg has laid the foundations for a revolution in scientific publishing as preprint servers are now commonly used in many scientific fields. They have been instrumental in supporting the rapid response to the COVID-19 pandemic. The Center for Open Science has permanently transformed global research culture in recent years by providing scholars with the necessary tools and digital infrastructure to make open science the default. In the Early Career category, the award is presented to Jessica Kosie and Martin Zettersten to carry out their project ManyBabies5, a cross-cultural study on influential models in infant attention research.

The €500,000 Einstein Foundation Award for Promoting Quality in Research honors researchers and institutions whose work helps to fundamentally advance the quality of research findings. "We are delighted to honor Paul Ginsparg and the Center for Open Science with the inaugural Einstein Foundation Award. They have made substantial contributions to fostering research integrity and to improving transparency and accessibility," explains Professor Martin Rennert, Chair of the Einstein Foundation. "The awardees perfectly embody the objective of the award: to strengthen confidence in science by effectively promoting systematic research quality."

The winners have been selected by a prestigious international, interdisciplinary jury. “The jury was impressed by the commitment the awardees had shown over many years to enhancing transparency, openness, and reliability in research, and by the idealism shaping their scientific work,” adds Dieter Imboden, the President of the Award Jury and former President of the Swiss National Science Foundation. Further members of the international jury in 2021 include President of the National Academy of Sciences of the United States Marcia McNutt, Executive Director of the Royal Society Julie Maxton, winner of the Nobel Prize in Economics Al Roth, science historian Lorraine Daston, neuroscientist Alastair Buchan, philosophers Moshe Halbertal and Susan Neiman, computer scientist Michel Cosnard, psychologist Dorothy Bishop, economists Lena Lavinas and Edward Miguel, psycholinguist Suzy Styles, and World Bank social scientist Soazic Elise Wang Sonne.

The award, supported by the State of Berlin and generously funded by the Damp Foundation for a period of ten years, will be presented in three categories to individual researchers, institutions, and early career researchers. “We hope that the new award will help to bring about long-term cultural change in science and that scientific standards will receive even greater attention and recognition,” explains former Senator for Science and Research of the State of Berlin Jürgen Zöllner, outlining the Damp Foundation’s commitment to the award.

At the award ceremony on November 24, Melinda French Gates, co-chair and trustee of the Bill & Melinda Gates Foundation, will address the audience and call for stronger collaboration in the sciences: “Even the proudest researchers would admit that they cannot succeed on their own. It’s great that the Einstein Foundation Award is not just recognizing those who fight disease or protect the planet, but also those who elevate the field of research itself. Science needs institutional support. We can all do more to strengthen research and collaboration not just in the places we call home, but throughout the entire world.”

The Einstein Foundation Award office is headed by the Founding Director of the QUEST Center at the Berlin Institute of Health at Charité (BIH), Ulrich Dirnagl. The QUEST (Quality, Ethics, Open Science, Translation) Center, the Max Planck Foundation and the publisher Nature Portfolio are supporting the Einstein Foundation in establishing the award.

About the award winners:

Paul Ginsparg is Professor of Physics and Information Science at Cornell University, USA. In 1991, he created the arXiv (“The Archive”), a document server for preprints, on which scientific findings are published without review and paywall restrictions. Preprint servers are online archives for scholarly publications which allow the scientific community to discuss and compare research findings immediately, transparently, openly, and globally. They also allow researchers to share original data, computer simulations, and other information. arXiv.org has set the standard for a number of these platforms in almost every scientific field. Today, the portal holds almost two million scientific articles from the fields of physics, mathematics, computer science, quantitative biology, quantitative finance, statistics, electrical engineering, systems science, and economics. Paul Ginsparg has been the driving force behind developing and maintaining the arXiv, pioneering the use of new technologies in automated quality control. The winner of the Individual Award receives €200,000.

The Center for Open Science (COS) is a non-profit organization based in Charlottesville, Virginia, USA. Its mission is to increase the openness, integrity, and reproducibility of scientific research. It promotes these aims by coordinating and catalyzing communities and stakeholders to drive change in global culture and incentives that drive researchers’ behavior, the infrastructure that supports their research, and the business models that dominate scholarly communication. Through its Open Science Framework, COS is providing a toolbox to make the entire research process transparent, accessible, collaborative, and verifiable – from the initial ideas through to the final research findings. The Transparency and Openness Promotion (TOP) Guidelines, launched by COS in 2015 and signed by over 5,000 signatories, along with all of the major publishers, have initiated an overdue transformation in the publishing culture. The center is highly regarded by its more than 350,000 users, who work across the social and behavioral sciences, the life sciences, the natural sciences, and educational research. The winner of the Institutional Award category receives €200,000.

Out of the four research projects that were shortlisted in the award’s Early Career category, the jury chose the project led by Jessica Kosie and Marten Zettersten. The team receives €100,000 to carry out its project ManyBabies5.

Jessica Kosie and Martin Zettersten (both from Princeton University, USA) are planning a large-scale and cross-cultural study on influential models in infant attention research. Current theories on this subject are largely only based on studies with a small number of participants, who are primarily from western industrialized countries. The ManyBabies5 team is a large-scale collaborative effort of more than 200 scientists from 122 laboratories in 40 countries on 6 continents. The overarching goal is to build a more robust and valid developmental science.


The Einstein Foundation Berlin is an independent, not-for-profit, science-led organization established as a foundation under civil law. For over ten years, it has promoted international cutting-edge science and research across disciplines and institutions in and for Berlin. It has funded almost 200 researchers, including three Nobel laureates, over 70 projects, and seven Einstein Centers. The Damp Stiftung was established by Dr. Walter Wübben, the former majority owner of the Klinikgruppe Damp, to fund medical research and teaching as well as social projects. Besides supporting the Einstein Foundation Award, the Damp Stiftung also provides funding for the Einstein Foundation’s Einstein Strategic Professorships program.

https://www.einsteinfoundation.de/en/award/2021/ Livestream record of the online presentation of the inaugural Einstein Foundation Awards in three categories.

<
Trophy of the category Institutional Award

<
Trophy of the category Individual Award

Trophy of the category Institutional Award 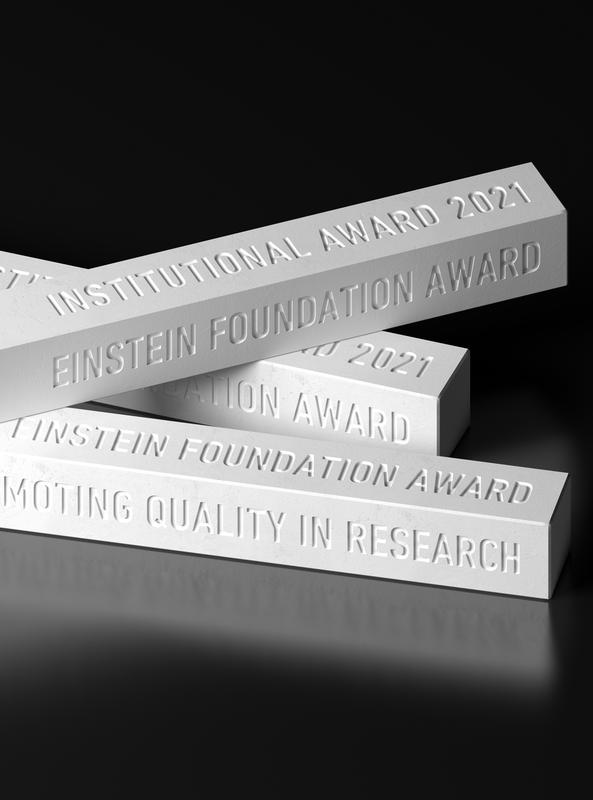 Trophy of the category Individual Award 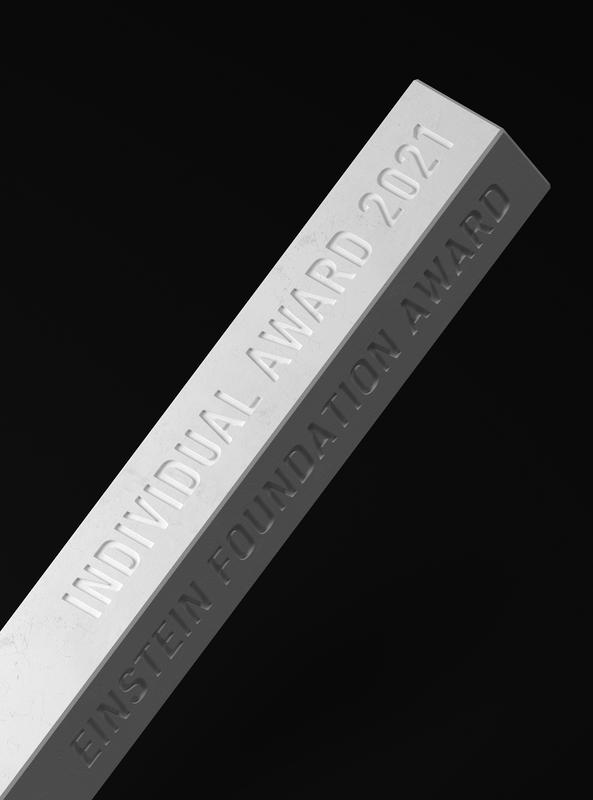