Citizen science data from Berlin show that urban areas can be a refuge for bats, if certain conditions are met

Urbanisation is a notable threat to bat populations all over the world, especially through artificial light and the reduction of habitat and food supply. If certain conditions are met, some spaces within metropolitan areas can be suitable for bats, so managing these spaces appropriately could contribute to bat conservation. With the help of more than 200 citizen scientists in Berlin, a team of scientists from the Leibniz Institute for Zoo and Wildlife Research (Leibniz-IZW) examined these conditions and investigated how they affect the abundance and distribution of bat species.

The Leibniz-IZW team concludes that maintaining a low level of artificial light at night is important for all bats in cities. In addition, access to vegetation and water bodies is essential for many of them. The results and conclusions are published in the scientific journal “Environmental Pollution”.

Biodiversity loss jeopardises important ecosystem functions and hence human health and well-being at magnitudes comparable to other processes of global change such as climate change. Major drivers of biodiversity loss are habitat loss and degradation through agriculture and logging, but also through urbanisation, which causes a dramatic transformation from natural to extremely anthropogenic landscapes. These processes continue to have severe detrimental effects on many of the more than 1400 species of bats, a substantial proportion of the entire mammalian diversity. “Increasing our knowledge about the conditions under which bats suffer or thrive in these different ecosystems – including cities – is crucial for bat conservation”, says Dr Daniel Lewanzik from the Leibniz-IZW Department of Evolutionary Ecology. Lewanzik and his colleagues teamed up with more than 200 citizen scientists to record ultrasonic vocalisations of five bat species up to six times at 600 sampling sites in Berlin over the course of two years. “This large dataset allowed us to investigate how features of the urban landscape influenced the presence of bats. This helped us to identify those environmental variables which are favourable for bat populations”, explains PD Dr Christian Voigt, head of the Leibniz-IZW Department of Evolutionary Ecology and senior author of the paper.

The results underpin the suspicion that artificial light at night negatively affects all bat species, even decreasing the occurrence of species previously considered “light tolerant”. Soprano pipistrelles were particularly light sensitive: Already at medium light levels they were rarely detected in urban areas and they disappeared completely at higher levels of illumination. Additionally, soprano pipistrelles were almost four times more likely to occur in areas with white light than with orange light, whereas Nathusius’ pipistrelles and mouse-eared bats did not show a preference for any light colour. In addition, the response of mouse-eared bats to increasing light levels was subject to seasonal influences: While their activity decreased with increasing light levels in summer, this was not the case in autumn.
Canopy cover, open water and the level of impervious surfaces such as streets and buildings also had a significant effect on some species which was modulated by their foraging habits. Species that forage along vegetation edges (such as pipistrelles) require trees for commuting and foraging, those that hunt directly above water surfaces (e.g. Daubenton’s bat) depend on the presence of open water. Most investigated species, particularly open-space foraging species, avoided high levels of impervious surfaces, for example streets framed by building blocks.

“Our findings highlight the importance of an extensive reduction of artificial light at night to the absolute minimum needed for human activities and of using dimming protocols, for example triggered by motion sensors wherever and whenever applicable”, Lewanzik and Voigt summarise. They further recommend maintaining existing and creating new vegetation patches where possible. It is essential to connect these fragments with each other and with water bodies via uninterrupted vegetation and dark corridors (e.g. residential gardens and tree lines). The investigation shows that even cities can provide suitable habitat for protected and threatened species when these recommendations are followed.

Collecting data together with citizen scientists had different positive effects, the authors say. “Collaborating with more than 200 highly motivated helpers made it possible to collect data simultaneously over the entire urban area of Berlin”, says Dr Miriam Brandt, head of the Leibniz-IZW unit Science Management unit and leader of the project “WTimpact”. WTimpact, in the frame of which the research on bats in Berlin was conducted, is a collaborative project funded by the German Federal Ministry of Education and Research from 2017 to 2021. “At the same time, we were able to introduce interested citizens to a part of urban nature that usually remains unnoticed - many participants were surprised to find bats in urban environments where they would not have expected them.” 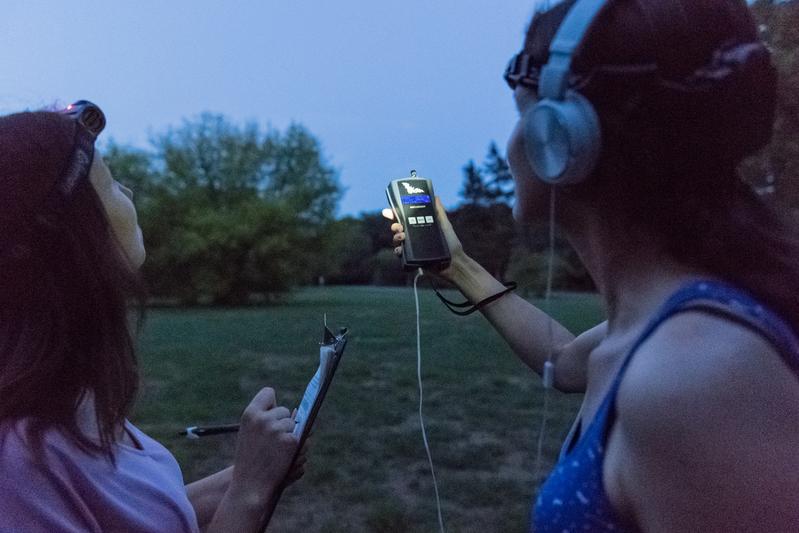