Magnetic navigation: songbirds use the Earth’s magnetic field as a stop sign during migration

A new study published today in Science Magazine has shed light on how birds navigate back to their breeding site after flying across two continents.

The study, part of an international collaboration led by researchers at the University of Oxford and including scientists from the University of Oldenburg, suggests that information extracted from the Earth’s magnetic field tells birds where and when to stop migrating. This trick allows them to precisely target the same breeding site year-on-year from thousands of kilometres away.

How birds sense the Earth’s magnetic field has been the subject of intense research. Birds might even ‘see’ magnetic field lines, and possibly use this ability to both determine the direction they’re facing in and where they are.

Dr Joe Wynn, formerly of the University of Oxford and now a researcher at the Institute for Avian Research, Germany, said: “Whilst we know an increasing amount about how birds inherit migratory information from their parents, how they return to the same site year-on-year with pinpoint accuracy has remained elusive. It’s quite exciting, therefore, that we’ve been able to find evidence that magnetic cues could be used by songbirds trying to re-locate their homes.” He started developing the idea for the study during a stay as a guest scientist in the research group of biologist Prof. Dr Henrik Mouritsen at the University of Oldenburg. Mouritsen was also involved in data analysis for the study.

You have arrived at your destination

The team analysed data from nearly 18,000 reed warblers to investigate whether the birds used the Earth’s magnetic field when finding their breeding site. Reed warblers are tiny songbirds that fly across the Sahara Desert each year to spend the summer in Europe.

They found that, as the magnetic field of Earth moved slightly, the sites to which birds returned moved with it, suggesting that birds homed to a moving magnetic target. Birds appeared to use magnetic information as a ‘stop sign’, with magnetic inclination in particular telling birds that they had arrived at their breeding location.
The work utilised ‘ringing’ data. For nearly a century, uniquely numbered metal rings have been attached to the legs of birds from across Europe.

Dr Wynn added that “Ringing data are a fantastic way to answer questions about migration, simply because they’ve been gathered for so many years across a very large area…and when looking at where birds and ringed and then recovered, it seems that reed warblers use a single magnetic coordinate a bit like a ‘stop sign’; when they reach the right magnetic field value, they stop migrating.”

Why use the magnetic field to inform return migration?

Dr Wynn explains that “Magnetic information seems to be pretty stable, meaning the magnetic field doesn’t change very much in a given location year-on-year. Aiming for a specific magnetic value during migration might make sense then, and the cue we think birds are using, inclination, appears the most stable aspect of the magnetic field. We think this gives the birds the best chance of making it back to the breeding site.”

In conclusion Dr Wynn said: "The trans-continental migration of birds that weigh less than a teaspoon is remarkable for so many reasons, but the ability to precisely pinpoint the breeding site from half the world away is perhaps the most extraordinary aspect of all. That we can investigate this using data gathered by scientists and bird-watchers alike is extremely exciting, and we hope that this use of citizen science data inspires others to go out, watch birds and get excited about science more generally." 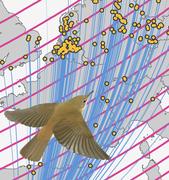 <
During their migration, reed warblers use magnetic information as a ‘stop sign’, with magnetic incl ...

During their migration, reed warblers use magnetic information as a ‘stop sign’, with magnetic inclination in particular telling the birds that they have arrived at their destination. 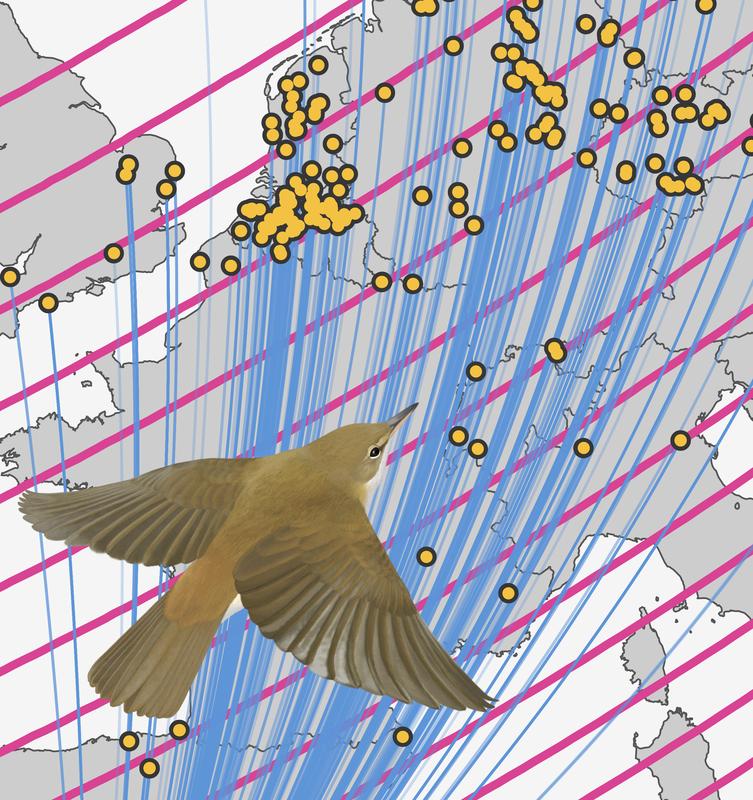