Researchers from Jena and Bonn have developed a cell system to analyze the regulation of G protein-coupled receptors. To prevent overstimulation, these pharmacologically important receptors can be inactivated by specific enzymes inside the cell. That desensitization mechanism is suspected of playing a crucial role for habituation on painkillers or anti-asthmatics. The toolbox, presented now in Nature Communications, enables the receptor-specific systematic elucidation of desensitization, which can provide important knowledge on tolerance development in drug candidates.

They are the special focus of drug research - G protein-coupled receptors (GPCR). These large protein molecules are located in the cell membranes and pass on their signals into the cell via the G proteins from which they are named. In this way, the receptor family of more than 800 members plays a central role in cell communication and in the processing of pain and sensory stimuli. About 30 percent of all drugs, such as opioids, beta-blockers or neuroleptics, target these receptors.

If the receptors are exposed to a high concentration of the specific messenger substances, enzymes inside the cell bind phosphate groups and the scaffolding protein arrestin to the receptor molecule and thus interrupt signal transmission. The receptor then enters the cell to be degraded or recycled back to the cell surface at later times. This process, known as desensitization, is a protective mechanism against overstimulation. However, it is also suspected of playing a crucial role in habituation effect on a drug. In the consequence of the development of tolerance with respect to an active ingredient, greater and greater amounts or stronger active ingredients are required for a specific pain relief or allergy inhibition, causing more adverse drug effects, correspondingly. The opioid crisis in the USA, triggered by the careless use of synthetic painkillers, shows the extent to which this process can even take on social relevance.

"While we know highly specific G proteins for the large number of G protein-coupled receptors, there are essentially four different enzymes in the cell that mediate desensitization," says Prof. Dr. Carsten Hoffmann, Director of the Institute for Molecular Cell Biology at Jena University Hospital. "But we don't know which role each of the four plays for a specific receptor." The Jena team of cell biologists and pharmacologists, together with partners from the University of Bonn, has tackled this very question and is now representing its results in the journal Nature Communications.

Because of the universal function of the enzymes across the class of receptors, animal models without the the four enzymes are not viable. "We therefore switched off the genes in cells using the CRISPR/Cas technique. Not just for one enzyme at a time, but in almost all possible combinations, up to and including all four enzymes being switched off at the same time," says Dr. Julia Drube. Working as a PostDoc at the Institute of Molecular Cell Biology, the biochemist and molecular biologist generated and replicated the cells. Researchers now used these different cell lines as a toolbox to systematically examine the binding behavior of arrestin to receptors. Twelve representative receptors of the GPCR-family were selected as examples, including receptors that are involved in pain transmission, regulation of the heartbeat or autoimmune processes and that are target molecules of the corresponding active substances. Dye labeling of the arrestin molecules showed under the fluorescence microscope or in platereader-assays whether or not the binding to the receptor had taken place.

PhD student Raphael Haider summarizes the result: "These desensitization reactions are very specific. We can roughly divide the examined receptors into two groups: In one group, two of the four enzymes play a role, in the other group all four are involved in desensitization." In addition, the researchers found receptors that bound to arrestin even without being stimulated by a messenger substance, as long as enough enzymes of the right type were present.

"We assume that our cell platform will facilitate the systematic elucidation of the regulation of G protein-coupled receptors and can thus contribute to the further detailed description of these pharmacologically highly relevant receptors," says Carsten Hoffmann and feels vindicated by inquiries from other laboratory teams. His group has already passed on their cell toolbox for research collaborations several times.

Dr. Julia Drube (left) and Raphael Haider analyze the regulation of G protein-coupled receptors. Using their complex cell system, they can then determine which enzymes are necessary for each individual case. 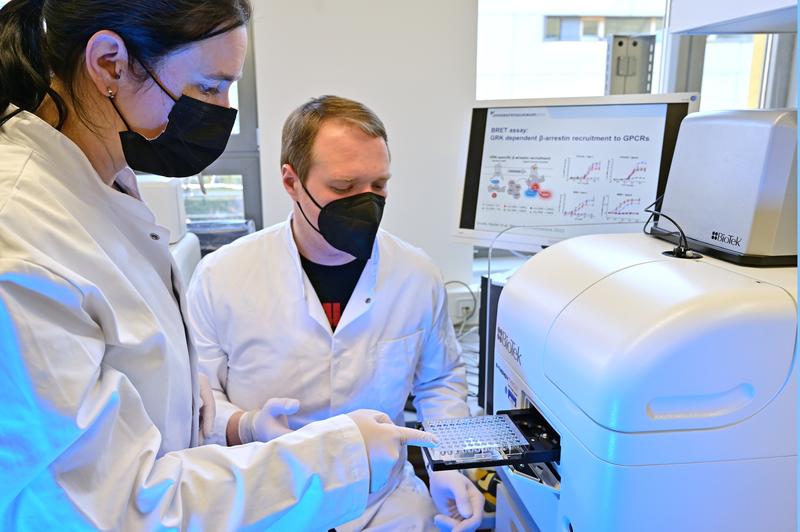