Nearly all everyday items are produced from natural gas and crude oil. In light of the global climate change and energy independence, natural gas consumption must urgently be reduced. The spin-off “Cyclize” of the University of Stuttgart has developed a new procedure with which natural gas can be replaced by plastic waste and exhaust gas CO2. This means that new products such as plastics, foams, adhesives, paints, and varnishes can be produced entirely without fossil-based resources. And CO2 can also be reduced in the process

The new plasma process was invented by the three young researchers – Maike Lambarth, Stephan Renninger, and Jan Stein – from the Institute for Photovoltaics at the University of Stuttgart. They founded the spin-off “Cyclize” and would like to solve three central problems with a single process:
- replacing natural gas for the chemical industry with non-fossil alternatives
- recycling the increasing amount of plastic waste in a sensible and holistic manner
- establishing a CO2 sink. Large amounts of CO2 emissions can thus be reduced. In addition, CO2 from exhaust gas from specific sources such as cement plants will be used as a resource (i.e., as a source of carbon).

Together with the exhaust gas CO2, mixed plastic waste or other carbon-containing waste such as residual waste or materials from industrial manufacturing will be recycled and returned to the carbon cycle. “This will not decarbonize the chemical industry carbon-free because there are still plenty of carbon atoms in the products themselves. However, these can be defossilized through non-fossil carbon sources and the electrification of the chemical industry,” says Lambarth. The Cyclize process uses a non-thermal plasma generated by a self-developed and efficient electronic system. The plasma is first used to gasify the plastic waste. The resulting hydrocarbon CO2 gas stream is then reformed into synthesis gas.

Synthesis gas, a mixture of carbon monoxide and hydrogen, can be used to produce basic chemicals or fuels. Until now, synthesis gas had been produced from natural gas through steam reforming. “Our Cyclize process can replace this process in an equivalent manner,” says Lambarth.
Because the process has such great potential to enable the circular economy for carbon, the founding team has been receiving EXIST transfer of research funding from the German Federal Ministry for Economic Affairs and Climate Action since May 2022. This funding supports outstanding research-based start-up projects that entail elaborate and high-risk development work. “We will use the funding to scale the process and bring it to industrial maturity,” says Lambarth.

“Our goal is to make our technology ready for the market in order to enable the holistic circular economy. If we can do this as planned, not only the economy but also society will benefit,” says Lambarth.

The three researchers now have 18 months to do this. They will be supported by Dominik Novakovic, who, as a business economist, will contribute his experience in advising deep tech start-ups, as well as by Professor Kai Peter Birke from the Institute of Photovoltaics, who will also contribute his start-up experience. The three founders have been researching sustainable plasma technology for three years. Its link to industry is the Stuttgart-based initiative CHEMampere, which deals with the electrification of the chemical industry. 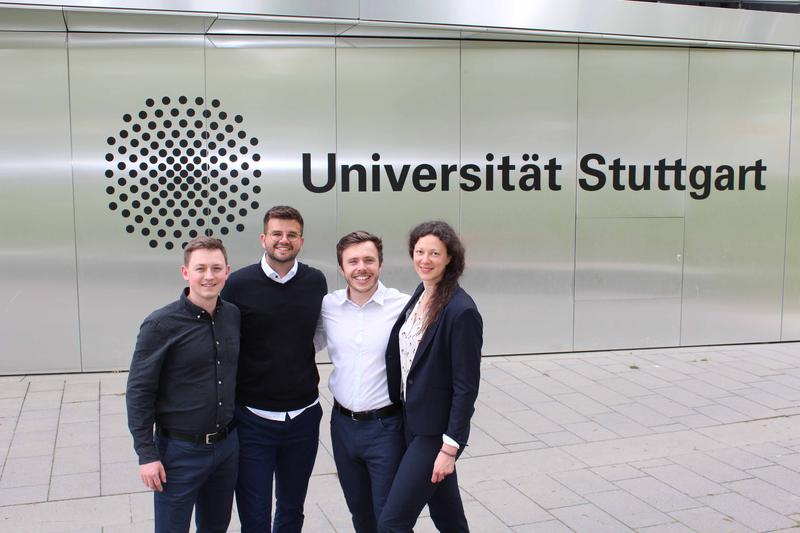