Bringing art and culture back into the center of life, revitalizing and reinterpreting the Domshof in downtown Bremen, making cultural events accessible to a broad audience again after months of a pandemic: With these goals in mind, over 300 students from the Hochschule für Künste (HfK) Bremen committed themselves to the "Open Space Domshof – The Influencers Taubenheim" throughout the summer of 2021. On May 19, 2022, the project was awarded a gold and a silver nail in the renowned competition of the Art Directors Club Germany (ADC). With the Talent Award, the ADC recognizes outstanding communication and design achievements by young creatives.

"The Open Space as an intervention in public space is a prime example of the social mission that the HfK fulfills: Creating creative spaces, stimulating critical dialogues, initiating innovations and strengthening participatory, democratic processes with artistic means," said Professor Roland Lambrette, Rector of the HfK.

2021 was a special year for music, art and culture – also at the HfK Bremen. 18 months of pandemic and several lockdowns had taken their toll on the students; the study of art and music was extremely limited by the corona virus: no concerts and no exhibitions, no audience and no response. This pent-up energy was looking for a space. And it found it in the city center – in the immediate vicinity of the UNESCO World Heritage Site and in the middle of the weekly market. For many people in Bremen, the arts were just around the corner, so to speak. They often encountered them by chance due to the central location.

The Open Space project on Domshof filled a vacuum in several respects: the inner-city was looking for new concepts beyond pure consumer use. The people of Bremen yearned for cultural events, students yearned to show their work, and the Hochschule für Künste wanted to create impulses for a dialogue on the role of culture in the city.

"The 'Open Space Domshof' project is an experiment in which we as a university, in conjunction with the Senatorin für Wirtschaft, Arbeit und Europa, are exploring how Bremen's inner city and public space can be interpreted and used in different ways," said Professor Lambrette. "Of course, the project also serves to make art and music accessible to a broad audience beyond established formats and elitist boundaries. We are grateful that the Senator is joining us in taking this step," Professor Lambrette emphasized.

"When the effects of the pandemic made it necessary to find innovative ways to revitalize the city center, we did so with the "Open Space Domshof" project. We created new perspectives for the creative scene and the event industry in the city center. The fact that the project has received national attention and won an award, shows that it was right to simply have the courage to act quickly and not turn all concerns backwards and forwards three times first," said Kristina Vogt, Senatorin für Wirtschaft, Arbeit und Europa and announces: "This year we will "play" at the Domshof with new ideas and at the end we will know which aspects from the experiments we will consolidate.”

The fact that the Open Space 2021 project was so successful is also largely thanks to the visual artists and designers involved. They saw the scaffolding, developed in collaboration with Wirth architects, as a living sculpture and canvas, and continually redesigned it. In the process, the students from the Fine Arts, Integrated Design and Digital Media programs addressed aesthetic, political and social issues. They finally met people again who could see their pictures, animations, designs, concepts, question them, find them beautiful or ugly. And finally have a dialogue again.

The stage presented diverse contributions from the Faculty of Music. Concerts by large orchestral ensembles with works by Ludwig van Beethoven and Antonin Dvořák, the opera gala "Gemeinsam ist es schöner noch" by the vocal students, as well as numerous market concerts from classical to jazz, from old to new music, could be experienced on the Domshof from June to September 2021.

In 13 weeks, 85 concerts, 13 exhibitions and other art and music events took place. The open space sculpture came to life, enlivened the city center – and sent a strong signal for "culture for all" in the middle of the city.

This courage, this energy, this creative will and this diversity were noticed far beyond Bremen's borders. The Open Space "is a platform for cultural enjoyment, play and exchange. A manifesto for lived culture in the inner-city space. A pioneer," was the verdict of the ADC's discerning jury, awarding the project two prizes: a silver nail for the design of new event formats and a gold nail for "Concept & Design of Experiences in Public Space."

From the ADC jury's statement on Open Space.
"Finally, after 18 months of pandemic standstill, a great spatial structure stands in the heart of Bremen for 13 weeks, which is used in lively and diverse ways. 300 students show their work in a permeable and sustainable stage architecture: the opposite of a closed, exclusive cultural and educational institution. It is a platform for cultural enjoyment, play and exchange. A manifesto for lived culture in inner-city space. A pioneer. We wish it every success in its further development!"

About the Art Directors Club für Deutschland e.V. (ADC):
The Art Directors Club for Germany promotes excellent creative communication. Its members work in the communication professions of design, digital, editorial, film & sound, communication in space and advertising, as well as in research & teaching.
The ADC has its headquarters in Berlin. Admission to ADC is exclusively through nomination by at least one member and a clearly defined admission procedure.

About the ADC Competition:
The ADC competition annually honors the most creative work in the German-speaking world. For over fifty years, the ADC jury has been awarding bronze, silver and gold ADC Nails as well as the ADC Grands Prix for excellence in all areas of creative communication – from web design to illustration, from staging to packaging, from advertising to photography. With the Talent Award, ADC honors young creatives for outstanding communication and design achievements.

The Hochschule für Künste Bremen is the leading art academy in Northwest Germany. With more than 1,000 students, 88 professors and 162 lecturers, the HfK Bremen offers a unique portfolio of courses and guarantees individual support for students in workshops, laboratories and studios as well as practice rooms and concert halls. The central quality of the HfK Bremen is the interdisciplinary connection of the different disciplines between art, design and music, which is developed in joint projects. The HfK Bremen has two locations, one in a historic warehouse building in the Überseestadt, the former docklands of Bremen, the other in a classicist building in the historic center of the city.
The university and its activities, ranging from exhibitions and interventions in public spaces to concerts and festivals, is a pillar of Bremen's cultural offerings (about 400 events at the HfK Bremen) and offers students many opportunities to test their skills in front of an audience.
As a historic Hanseatic city, Bremen has developed civic engagement, democratic traditions, idiosyncrasies and independence over centuries and is regarded in Germany as a pioneering and experimental city that is open to the new. Bremen is very popular among students as a place to live.

<
The Open Space project on the Domshof was made possible by the cooperation of the Senatorin für Wirt ...
David Bartusch

The Open Space project on the Domshof was made possible by the cooperation of the Senatorin für Wirtschaft, Arbeit und Europa with the HfK Bremen. 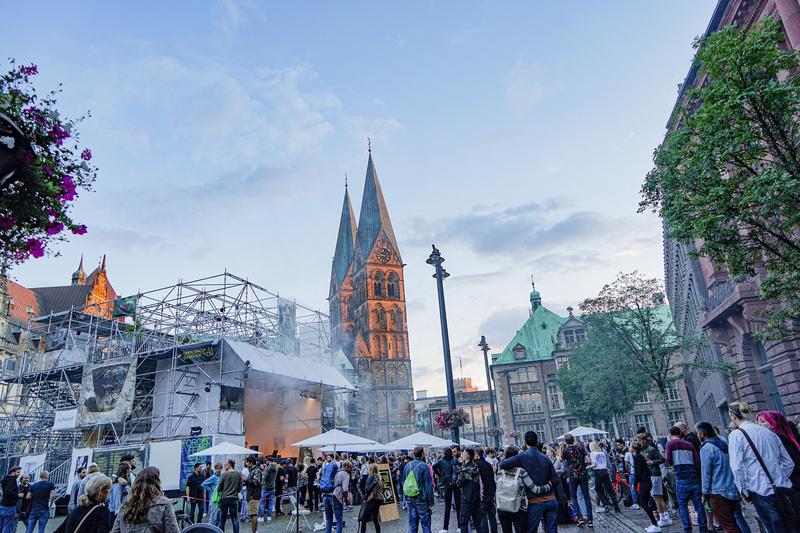 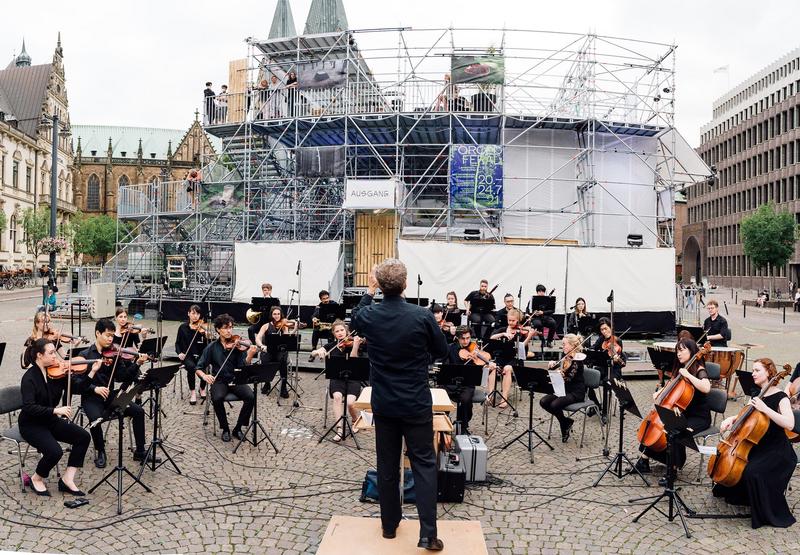