Early urbanism found in the Amazon

Archaeologists from the German Archaeological Institute in cooperation with partners from the universities of Bonn and Exeter reveal pre-Hispanic cities in Bolivia with laser technology LIDAR. The results now published in Nature will contribute to the discussion of the global wealth of early urban diversity, and will help to redefine the categories used for past and present Amazonian societies

Archaeological remains of agrarian-based, low-density urbanism have been reported to exist beneath the tropical forests of Southeast Asia, Sri Lanka and Central America. However, beyond some large interconnected settlements in southern Amazonia, there has been no such evidence for pre-Hispanic Amazonia. New lidar data of sites belonging to the Casarabe culture (around AD 500 to AD 1400) in the Llanos de Mojos savannah–forest mosaic, southwest Amazonia, revealing the presence of two remarkably large sites (147 ha and 315 ha) in a dense four-tiered settlement system.

The known Casarabe culture area spans approximately 4,500 km2, with one of the large settlement sites covering an area of approximately 500 km2. The civic-ceremonial architecture of these large settlement sites includes stepped platforms, on top of which lie U-shaped structures, rectangular platform mounds and conical pyramids (which are up to 22 m tall). The large settlement sites are surrounded by ranked concentric polygonal banks and represent central nodes that are connected to lower-ranked sites by straight, raised causeways that stretch over several kilometres. Massive water-management infrastructure, composed of canals and reservoirs, complete the settlement system in an anthropogenically modified landscape.

The architectural layout of the large settlement sites indicates that the inhabitants of this region created a new social and public landscape through monumentality. The scale, monumentality, labour involved in the construction of the civic-ceremonial architecture and water-management infrastructure, and the spatial extent of settlement dispersal, compare favourably to Andean cultures and are of a scale far beyond the sophisticated, interconnected settlements of southern Amazonia, which lack monumental civic-ceremonial architecture.

The results clearly indicate that the Casarabe-culture settlement pattern represents a type of tropical low-density urbanism that has not previously been described in Amazonia.

Lidar technology
Lidar technology has revolutionized the documentation of archaeological sites worldwide, especially those hidden under dense forest. In the Amazon lowlands, lidar was first used for archaeological prospection in the Iténez/Guaporé region as part of the 2011 German–Bolivian Project in Mojos (PABAM).
In the present study, a total of 200 km2 distributed over 6 unconnected areas of varying size of the Casarabe culture area were mapped. The sensor used was a Riegl VUX-1 scanner, with a Trimble APX-15 UAV GNSS, attached to a Eurocopter AS350 helicopter using a custom mount. Flight altitude was 200 m above ground level, airspeed was 45 knots. Missions were flown in 200-m parallel strips, with 50% overlap. Data post-processing was done by M.S. (ArcTron) using the RIEGL software RiAnalyze.

DAI in Bolivia
The DAI project in the Llanos de Mojos will continue until 2024 and also includes the continued mapping of pre-Hispanic sites. A drone equipped with LIDAR has been successfully used for this purpose since 2021.

https://www.dainst.blog/was-percy-fawcett-niemals-fand-urbanismus-im-bolivianisc... - Further information about the project and the recent results (in German language)

Screenshots from a 3D animation of the Cotoca site 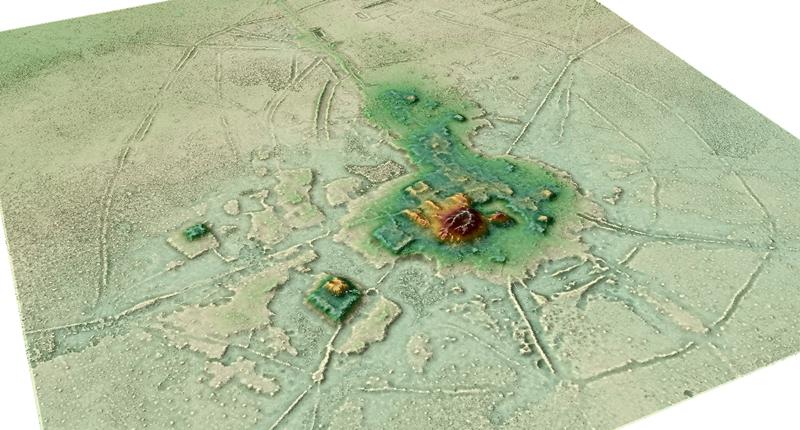