Advanced “mini brains” in the dish

Organoids that mimic human brain cortex in development and disease: “Outer Radial Glia” (oRG) cells are nervous system stem cells that are instrumental for the development of the human cortex and have been challenging to produce in the lab. Now, a team of Max Planck researchers from Berlin succeeded in generating brain organoids that are enriched with these stem cells by refining and standardizing existing protocols for these mini-organs.

Organoids are advanced three-dimensional cell cultures that form miniature versions of tissues such as the liver, intestine, brain, or certain types of cancers, and hold great promise for science. They enable large-scale research into development, disease and future therapies without the need to rely on a complete organism. But there are still many obstacles to overcome until an organoid is sufficiently similar to a real organ or part of it.

In an article published in Nature Cell Biology, scientists at the Max Planck Institute for Molecular Genetics (MPIMG) report they succeeded in growing organoids resembling the human cerebral cortex with unprecedented consistency and quality. They primed stem cells with a cocktail of three chemical potions for a short time at a very early stage of their development. This instructed the stem cells to form cellular aggregates during the following weeks that anatomically mimic the layering of the human cortex. Among those layers grew outer radial glia (oRG) cells, specialized stem cells that are essential for the characteristic expansion of brain hemispheres in humans and apes. This is the first time that these cells have been successfully generated, enriched and characterized in a cell culture system.
“Surprisingly, it is pretty easy to generate brain organoids in the lab by many methods,” says Yechiel Elkabetz, research group leader at the MPIMG in Berlin, Germany and previously at Tel Aviv University, Israel, who conducted this research. “But it is hard to get it right. The challenge is to create a very pure nervous system stem cell culture at the start and to persuade these cells to build multi-layered neural organoids with the correct cell types in the right spots.”

Instruct the builders of the brain

“Not only do neural organoid cultures turn out to be very heterogeneous, also the stem cells that build these organoids are changing over time”, explains Sneha Arora, researcher in Elkabetz’ lab and one of the lead authors of the paper. She points out that there are quite a few widely used protocols that just “leave” the cells to instruct themselves with only partial or no guidance. “If you employ builders to build a series of houses without any or with incomplete instructions, you will end up with a different building every time.”

Finding the correct instructions for the builders of the brain has been challenging labs around the world for a decade, and a variety of protocols and procedures emerged – each with different outcomes. So how can you ever know which method is the right one? Elkabetz and his colleagues teamed up with several researchers from the MPIMG to standardize existing techniques and to develop the most advanced protocol to generate brain organoids that resemble the human cerebral cortex in the best possible way.

Like other groups before, the researchers used inhibitors, chemical drugs that tell the developing cell “what not to transform into”, so that they will eventually choose the correct route. They found out that three different signaling pathways needed to be blocked to persuade the stem cells to become cortical cells a few weeks later. “We educate and deploy the best builders for our organoids. Once the starting cells are created and have their instructions built-in, we don’t do much more than that, and the organoid assembles itself, this time properly, which works very well,” says Arora.

“It was a key point to combine Dual-SMAD and WNT inhibition, both of which have been utilized mostly separately before,” Arora says. According to her, timing and dosing the drugs is crucial. “During the very early phase and over just eight days, we generated a very homogeneous starting population of cells. These turned out to be the best initial building blocks for the entire organ.”

Starting with a panel of different cell lines and methodical approaches that were compared in parallel, the researchers finally succeeded in consistently generating cortical organoids in unprecedented accuracy. “One of the important achievements of our study is that we were able to reproduce the cellular diversity in each and every organoid,” says Daniel Rosebrock, a computational researcher at the Elkabetz lab and the Department of Computational Molecular Biology at the MPIMG and the lead author of this interdisciplinary work. “While each organoid was able to retain the many different cell types, there was little difference between individual organoids.” The researchers confirmed this in tissue stains and by sequencing of the individual cells’ RNA.

“Across all protocols and lines, the organoids made with our new protocol exhibited both the highest and most consistent levels of cortical identity,” says Rosebrock. This has implications on organoid disease models, too: “We learned that the derivation method determines whether a disease phenotype in an organoid model is meaningful at all.”

Several neurodevelopmental diseases such as microcephaly have been modeled in organoids. They are caused by disruptions of the highly regulated process of cerebral cortical development. Early neural progenitor cells have to find a balance between a sufficient degree of self-renewal on the one hand and differentiation capacity on the other. It is therefore imperative to investigate these processes in disease modeling.

The scientists demonstrated that their organoids develop oRG cells, the special kind of neural stem cells that are known to play a critical role in brain development in humans and apes. They are responsible for the huge cortical brain hemispheres in primates.

“Our oRG cells gradually become the most important stem cells in our brain as it develops,” Elkabetz says. After a certain period of growth, these cells comprise a major stem cell population in the brain. “Of course, the developing brains of primates and humans in particular are rarely accessible to researchers, and therefore cultured oRG cells are a great opportunity for developmental research and for future therapeutic applications.”

After 50 days of growth, the team's organoids are considerably enriched with this type of stem cell. “We have developed a method to generate and enrich oRG cells in the dish in a robust and consistent way that has not been described previously,” Elkabetz says. “This is a pretty substantial achievement. We will finally be able to make more meaningful models of diseases like microcephaly that are closer to the truth of a real organ.”

The findings provide a platform to build upon, for future applications in basic research, pharmacological testing, or in the clinic, the scientist concludes: “We provide a solid foundation for the generation of neural stem cells that are capable of forming the rich cellular diversity, which is the hallmark of the cortex. We believe this will lead to organoid disease models that will advance research in major ways.” 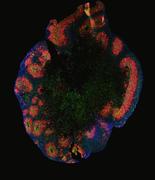 <
Section of a microscopy image of the organoid with the typical layers of the cerebral cortex visible ...
Sneha Arora
MPIMG

Human cortical organoid under the microscope, stained with fluorescent dyes. These “mini brains” have been made with iPS cells via short inhibition of three developmental pathways (termed triple inhibition, Triple-i). 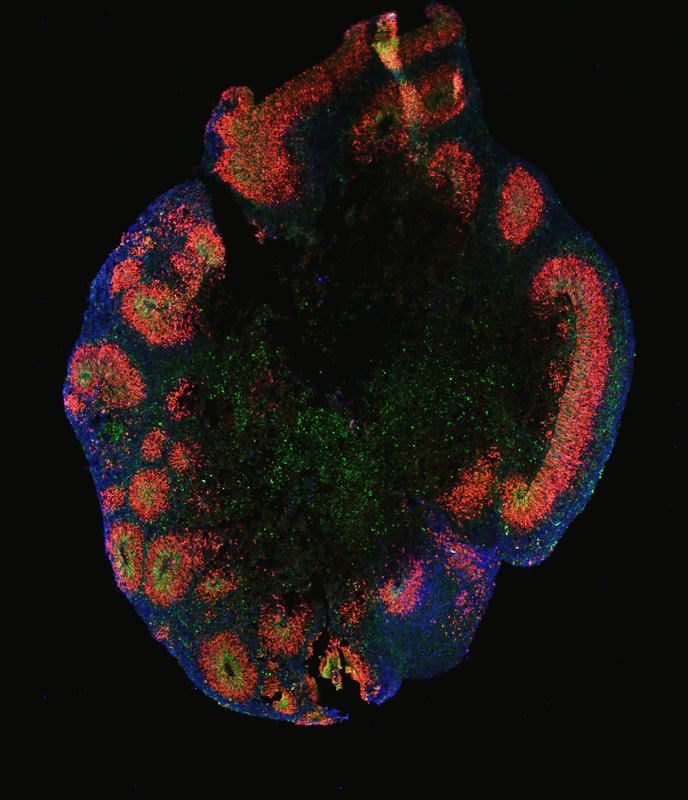 Section of a microscopy image of the organoid with the typical layers of the cerebral cortex visible. 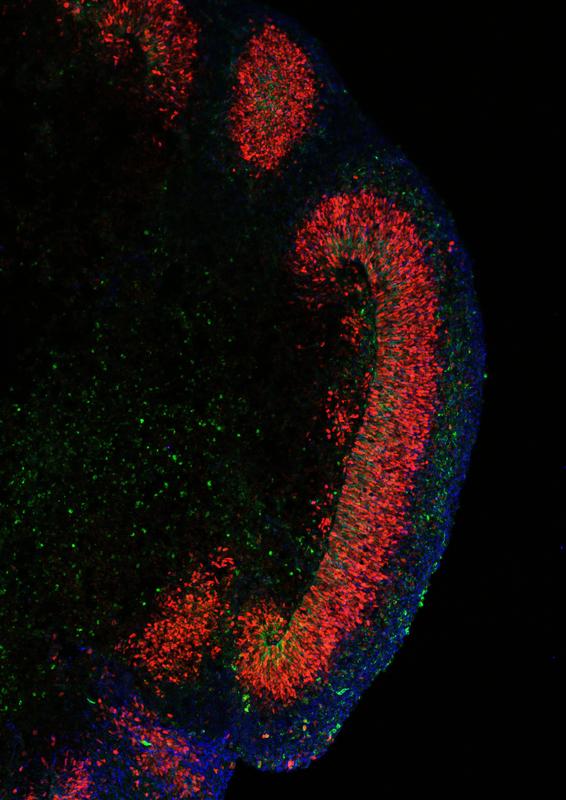