Home > Press release: Life in the earth’s interior as ...

Microorganisms in aquifers deep below the earth’s surface produce similar amounts of biomass as those in some marine waters. This is the finding of researchers led by the Friedrich Schiller University Jena and the German Centre for Integrative Biodiversity Research (iDiv), both Germany. Applying a unique, ultra-sensitive measurement method using radioactive carbon, they were able to demonstrate for the first time that these biotic communities in absolute darkness do not depend on sunlight. Instead, they can obtain energy autonomously from rock oxidation or from compounds transported into the deep. The study has been published in “Nature Geoscience”.

Terrestrial and marine habitats have been considered the ecosystems with the highest primary production on earth by far, i.e., the conversion of inorganic to organic carbon. Microscopic algae in the upper layers of the oceans and plants on land bind atmospheric carbon (CO2) and produce plant material driven by photosynthesis, i.e. the sun provides energy. Since sunlight does not penetrate into the subsurface, hardly any such primary production is to be expected. So much for the theory.

However, genetic analyses of microorganisms in groundwater have indicated that even here many microorganisms are capable of primary production. In the absence of light, they must obtain the energy from oxidising inorganic compounds, like from reduced sulfur of the surrounding rocks. However, the role of primary producers in the subsurface had never been confirmed before.

Groundwater is one of our most important sources of clean drinking water. The groundwater environment of the carbonate aquifers alone, which is the focus of the study, provides about ten per cent of the world’s drinking water. With this in mind, the researchers carried out measurements of microbial microorganism carbon fixation in a subsurface aquifer, 5 to 90 metres belowground.

“The rates we measured were much higher than we anticipated,” says the first author of the study Dr Will Overholt, Postdoctoral Researcher at Friedrich Schiller University Jena. “They equal carbon fixation rates measured in nutrient-poor marine surface waters and are up to six-fold greater than those observed in the lower zones of the sunlit open ocean, where there is just enough light for photosynthesis”. Based on the measured carbon fixation rates, the researchers conservatively extrapolated global primary production in carbonate groundwater to be 110 million metric tons of carbon per year. Collectively, the net primary productivity of approximately 66 per cent of the planet’s groundwater reservoirs would total 260 million metric tons of carbon per year, which is approximately 0.5 per cent that of marine systems and 0.25 per cent of global net primary production estimates.

“This may sound small but these measurements represent only our first estimate of what the true global value may be,” says senior author Prof. Kirsten Küsel from the University of Jena and iDiv. “Since there is very little energy available in these nutrient-poor and permanently dark habitats, even a small percentage of the global primary production is a surprise.”

The researchers also sought to identify the microorganisms responsible for fixing carbon and generating new biomass within the aquifer. Metagenomic analyses point to a highly abundant microorganism not closely related to previously studied bacteria, within an uncharacterised order of “Nitrospiria”. “As food, these organisms are thought to form the basis of life for the entire groundwater ecosystem with all of its thousands of microbial species, similar to the role algae play in the oceans or plants on land,” says Overholt.

Unique method to measure primary production of microorganisms in aquifers
Measuring carbon fixation can be done with radioactively labelled carbon dioxide. “In carbonate rock environments, there is abundant dissolved CO2, that can make it difficult to directly observe rates of carbon fixation,” says Prof Susan Trumbore from the Max Planck Institute for Biogeochemistry in Jena. The team, therefore, used a special method to trace a small amount of labelled CO2 using highly sensitive accelerator mass spectrometry. “It is exciting to see what new insights these methods can lead to,” she says.

“Our findings offer new insights into how these subsurface ecosystems function, giving clues on how to monitor or remediate groundwater sources,” says Kirsten Küsel.

This study is part of the Collaborative Research Centre AquaDiva of the University of Jena and iDiv, and is partially funded by the Deutsche Forschungsgemeinschaft (DFG, German Research Foundation) – CRC 1076 – Project Number 218627073.

Dr Will Overholt and Prof. Dr Kirsten Küsel from the University of Jena during water analyses in the field. 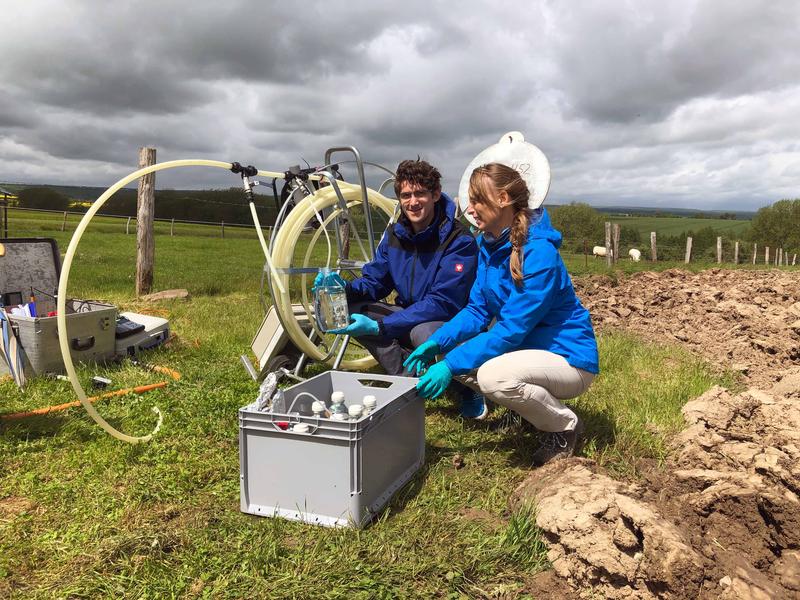